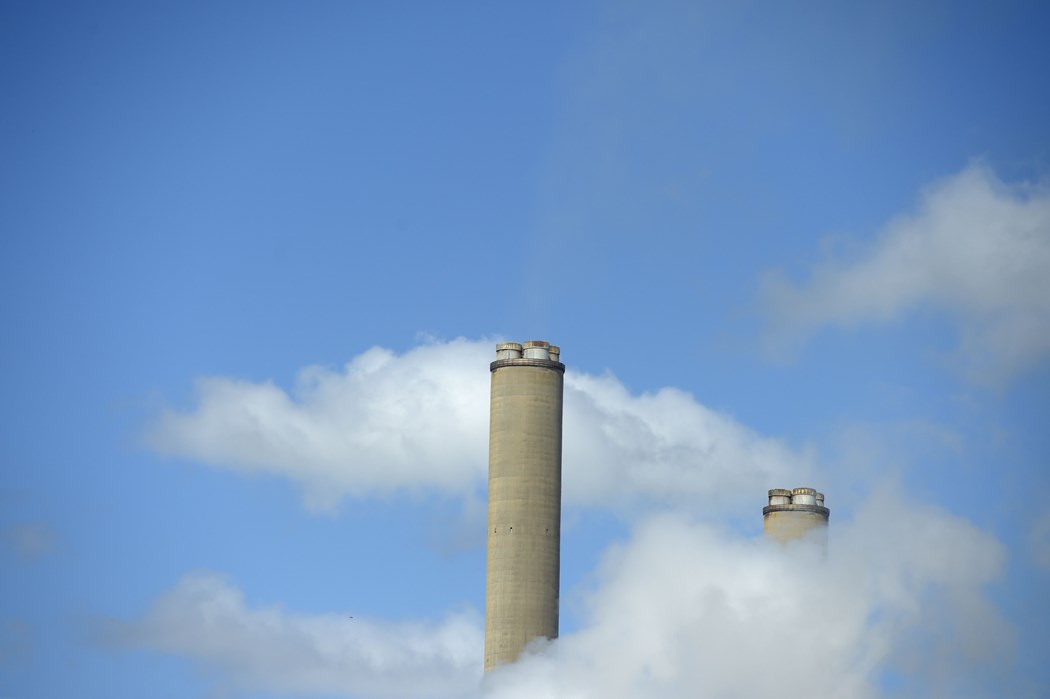 Vapor from the cooling towers swirl around the chimneys of the AGL Energy Ltd. Loy Yang Power Station in the Latrobe Valley, Australia, on Tuesday, Oct. 26, 2021. Australia’s Prime Minister finally agreed to a plan to zero out its carbon emissions by 2050, but said he wouldn’t enshrine the target in law, and would continue to rely on fossil fuels and projects designed to offset planet-warming pollution. Photographer: Carla Gottgens/Bloomberg

(Bloomberg) -- Australia’s top polluter bowed to pressure from its biggest shareholder, billionaire climate activist Mike Cannon-Brookes, and announced it would exit coal power by 2035, a decade earlier than previously planned.

AGL Energy Ltd. will shutter the nation’s dirtiest power plant, Loy Yang A in Victoria, by 2035, the Sydney-based company said Thursday. Its Bayswater site in New South Wales -- the second-most polluting facility -- is on track to close between 2030 and 2033, AGL Chair Patricia McKenzie said in the statement.

The move marks a dramatic turnaround for the 185-year-old utility. Cannon-Brookes became AGL’s top shareholder in May and successfully lobbied the company to ditch plans to split into separate retail and power-generation companies, which would have allowed its coal power plants to continue operating into the 2040s. The tech billionaire has said that shuttering them no later than 2035 would encourage additional investment in clean energy projects that could replace them.

“This is about access to greater pools of capital in the market -- there are billions and billions of dollars out there wanting to be deployed in the market today,” interim Chief Executive Officer Damien Nicks said in an interview. “We want to make sure we have access to that capital. That is the biggest part of the decision we are making.”

The shift is also symptomatic of a new wind blowing in Australia, one of the world’s biggest per-capita polluters, which is increasingly looking to take advantage of its sunny climate and vast empty spaces to become a clean energy powerhouse. The government that came to power in May has pledged stronger action on climate, and states have announced ambitious plans to move away from coal -- which last year still fueled more than half the nation’s power needs.

READ: Australia’s Rise as Green Superpower Will Supercharge the World

“Cannon-Brookes is receiving some well-earned applause for the success of his climate activism,” said Will Edmonds, an analyst at BloombergNEF. “However, there are also many economic factors in Australia’s energy market that are pushing operators like AGL to close their coal plants earlier.”

Loy Yang A and Bayswater are huge spewers of greenhouse gases, producing almost 31 million tons of carbon dioxide in 2019-2020, or almost 10% of all Australia’s reported emissions. The company said its annual emissions will fall from 40 million tons to eventually reach net-zero for Scope 1 and 2 by the time its coal assets are closed.

Loy Yang has more than 2 gigawatts of capacity and generates almost a third of Victoria’s electricity. AGL will seek to supply customers with up to 12 gigawatts of new generation by 2036, requiring an investment of A$20 billion ($13 billion) funded from its balance sheet, offtakes and partnerships, it said Thursday.

The company said it would recognize a A$700 million charge related to the early closure of Loy Yang.

Cannon-Brookes’ Grok Ventures family office commended AGL’s commitment to accelerating the timeframe on shutting down its coal plants, but underscored the need for more new board members and pointed to its nomination of four newcomers to the company’s six-person board.

AGL shares rose as much as 3.8% during early trading hours in Sydney and are up 8.1% this year, after four consecutive annual losses that saw the company’s value plummet.

The World Can’t Tackle the Climate Crisis Without New Technologies