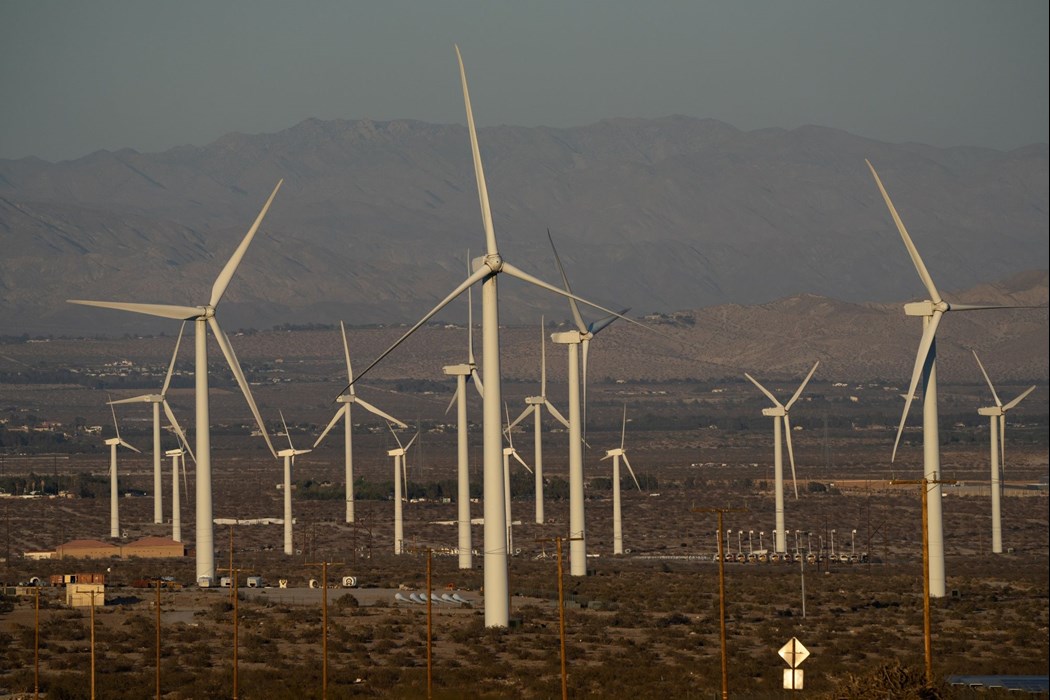 The Biden administration on Wednesday outlined an array of initiatives to advance clean energy, including plans to hold the largest-ever sale of offshore wind farm rights in U.S. history and accelerate the construction of new power lines to transmit renewable electricity across the nation.

(Bloomberg) -- The Biden administration on Wednesday outlined an array of initiatives to advance clean energy, including plans to hold the largest-ever sale of offshore wind farm rights in U.S. history and accelerate the construction of new power lines to transmit renewable electricity across the nation.

The efforts, which span at least seven federal agencies, could help fulfill President Joe Biden’s climate ambitions to decarbonize the power grid by 2035 and at least halve U.S. greenhouse gas emissions by the end of the decade. The initiatives are being unveiled as key elements of Biden’s climate agenda are stalled in the Senate.

The power grid initiative includes billions of dollars in federal funding -- some of it from the newly enacted bipartisan infrastructure law -- to upgrade and replace transmission lines nationwide. Some $10 billion would be earmarked for states, tribes and utilities to enhance grid resilience and help prevent power outages amid extreme weather and wildfires, the White House said in a fact sheet.

Past efforts to build high-voltage power lines so renewable power can be transported from the rural Midwest to coastal cities faltered in the face of local opposition, landowner concerns and permitting requirements. The Biden administration is seeking to overcome those obstacles by strengthening coordination with local residents and officials and encouraging investment in the most needed projects, according to the fact sheet.

The effort dovetails with another new administration plan to expedite and prioritize government reviews of renewable energy projects on public lands managed by the Agriculture and Interior departments -- part of a bid to authorize 25 gigawatts of solar, wind and geothermal energy across that territory by 2025. Under an agreement being announced Wednesday, five federal government agencies, including the Defense Department, are agreeing to coordinate on environmental reviews and prioritize resources toward the project reviews.

The planned offshore wind lease sale next month would give renewable developers a shot at buying leases to install turbines in shallow Atlantic waters between New Jersey and New York’s Long Island. The six tracts that will be auctioned off in the so-called New York Bight have the potential to generate as much as seven gigawatts of electricity -- enough to power 2 million homes -- according to the Interior Department.

“With its potential to supply large-scale and dependable clean energy, the responsible development of offshore wind is still our best strategy to quickly decarbonizing our economy and mitigating the effects of climate change,” Liz Burdock, president of the Business Network for Offshore Wind, said in a statement.

For the first time, the Interior Department will bar companies from bidding on more than one of the leases in the sale -- a decision designed to encourage broad participation and help build out the nascent offshore wind industry in the U.S. The restriction was opposed by some large offshore wind developers that might otherwise have nabbed adjacent leases in the hopes of sharing resources across neighboring projects.

Other new lease terms will encourage winning bidders to enter into agreements with labor unions and use U.S.-built turbine blades, towers and other equipment.

“The benefits of the lease sale will go beyond New York and New Jersey and will support jobs and businesses throughout the U.S.,” said Erik Milito, president of the National Ocean Industries Association that represents offshore energy developers.

Interior officials scaled back the overall size of the auction -- with leases now set to span 488,201 acres (197,570 hectares) -- in response to concerns the development could harm commercial fishing in a region home to some of the world’s richest scallop beds. “We have really sought to ensure that these lease areas lead to the coexistence and in fact the thriving of other ocean users,” said Amanda Lefton, director of the Bureau of Ocean Energy Management.

Still the modifications appeared unlikely to resolve concerns from fishing interests who have challenged the agency’s earlier offshore wind decisions and warned the plans imperil their business.

New Jersey Governor Phil Murphy said he is working to address concerns of the commercial fishing industry as well as Long Beach Island residents worried about the visibility of nearby turbines. “We think the concerns are manageable; we think there are solutions to the concerns of both communities.” Murphy told reporters in a conference call. “But we absolutely take them seriously.”

Fishing interests argued that more needs to be done.

“The New York Bight is a hugely conflicted area,” said Anne Hawkins, executive director of the Responsible Offshore Development Alliance that represents fishing interests. “Issuing new leases before putting processes in place to mitigate the clear risks this scale of development poses to historic food production and ecological resilience will result in devastating impacts that would have been largely avoidable with careful planning.”

(Updates with sale details and comments from third paragraph)

By Jennifer A. Dlouhy

US awards $8.4m to access geothermal potential from abandoned oil and gas wells