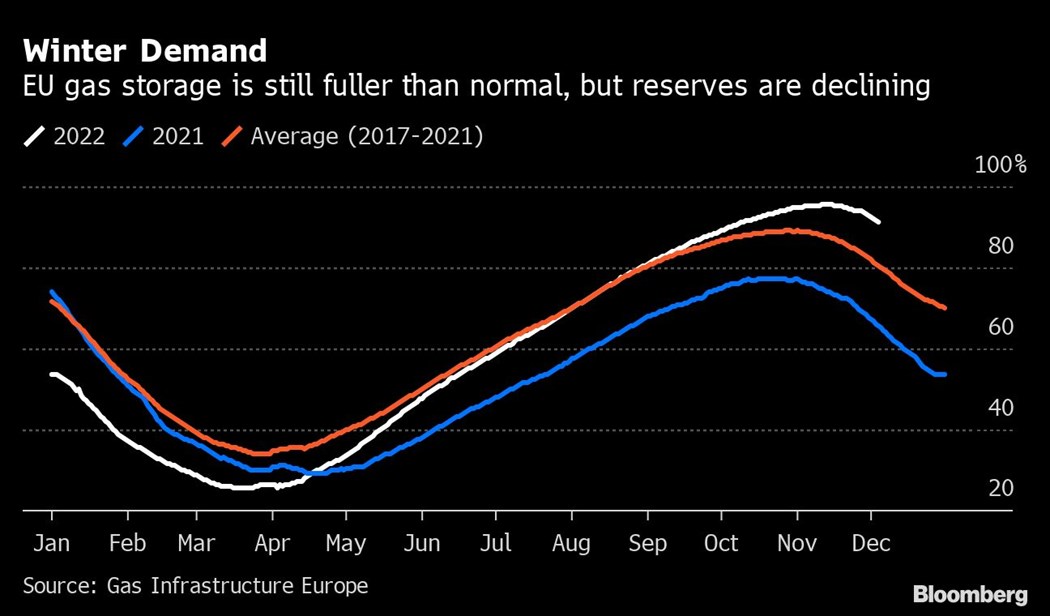 Benchmark futures swung between small gains and losses, after rising as much as 4.3% earlier. The cold snap in northwest Europe is putting more pressure on inventories that have been built up for the winter. But reserves remain fuller than normal at about 91%, keeping gas prices in check.

The outlook for the next two weeks is dominated by an Arctic blast, with temperatures in the UK and Nordics dropping below freezing, according to forecaster Maxar Technologies Inc. Only Iberia and parts of southern Europe are spared from the frigid weather.

Following a mild autumn, traders are now torn between rising heating demand and relatively comfortable supply conditions, said Ole Hansen, head of commodity strategy at Saxo Bank A/S. Yet, “given the prospect for colder-than-normal temperatures, the price of gas is likely to remain elevated in the coming weeks.”

Meanwhile, European Union nations are continuing discussions on ways to ease market volatility after energy bills surged to record-highs earlier this year, causing the worst cost-of-living crisis in decades. Seven members of the bloc have called for a tighter cap on gas costs, and the Netherlands proposed putting a ceiling on prices for the fuel used for storage which would help replenish reservoirs next year. EU energy ministers are set to discuss the issue next week.

“Supply is expected to remain tight, especially for winter 2023-24, which means that prices may well rise again, and price volatility is likely to continue,” the Oxford Institute for Energy Studies said in a report this week. “If a price cap makes it more difficult for supply and demand to balance, it could make matters worse.”