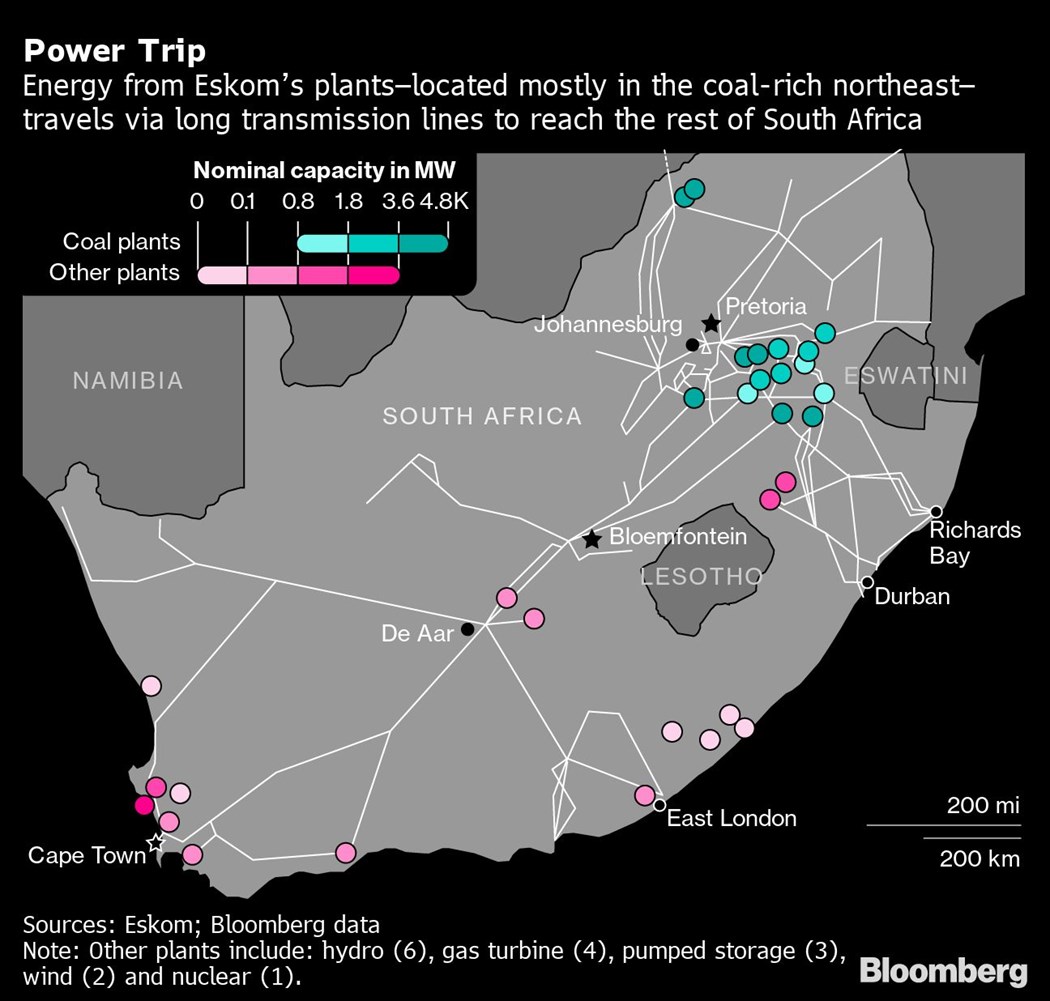 (Bloomberg) -- South Africa is forging ahead with a plan to create a new state-owned power company by converting three coal-fired plants into gas-burning generators to ease the nation’s energy crisis.

State power utility Eskom Holdings SOC Ltd. generates most of South Africa’s electricity, and has subjected the country to rolling blackouts since 2008 because its old and poorly maintained facilities can’t keep pace with demand. The proposed new company, dubbed Generation 2, will take over the three plants that are set for decommissioning, according to Energy, Minerals and Resource Minister Gwede Mantashe.

“If we re-purpose them into gas power stations, we will save a lot of life in South Africa in terms of energy,” Mantashe said in an interview in his office in Pretoria, adding that it was “urgent” to create the company. The ministry plans to invite engineering firms to study the plants and offer advice, he said.

South Africa has struggled to boost generation. At least five rounds of bids for renewable power projects haven’t added sufficient capacity, while an emergency plan to add electricity is mired in legal wrangles. A new state electricity company is yet another attempt to find a solution to the crisis that has hampered economic growth in Africa’s most-industrialized nation.

Mantashe’s plans envisages the new utility taking over the aging Hendrina, Grootvlei and Camden power plants, which have a combined generation capacity of 4,800 megawatts.

Still, procuring gas for the converted plants may prove to be a challenge. Russia’s war on Ukraine has countries across the world scrambling for the fuel, with Europe even considering rationing. US natural gas futures, which have more than doubled this year, rose above $9 per million British thermal units at 11:13 a.m. in London.

“This idea is never going to happen,” said Peter Attard Montalto, head of capital markets research at Intellidex. “The plants in question are tied into advanced funding plans with the World Bank and other funders, who would pull out under this new proposed structure. There is no agreement in government on this at all, and a new state-owned entity would not get funding from the National Treasury, nor from the market.”

Opposition parties are also skeptical of the government’s plans, given its poor track record in overseeing state companies.

The idea of setting up a new power utility “proves beyond any doubt that President Cyril Ramaphosa’s government is completely out of touch and clueless on what needs to be done to address the electricity crisis,” said Ghaleb Cachalia, the main opposition Democratic Alliance’s shadow minister for public enterprises.

Almost a third of Eskom’s plants will reach end-of-life as early as 2023. To replace the plants and add capacity needed to meet rising demand will take years and cost more than 1 trillion rand ($71 billion), according to government estimates. The utility is already struggling to service its 396 billion rand of debt.

Mantashe expects money for the new power generation company -- labeled Eskom 2.0 by the local media -- to come from the state, the market and investors.

“Money follows ideas,” he said. “If you come up with a sustainable proposal, and it makes sense, investors will come.”

If the proposal is approved, the government will invite engineering, procurement, construction companies to participate. The cost of converting the plants would be determined at that point, said Maduna Ngubeni, the department’s head of projects.

South Africa also plans to build a new 2,500-megawatt nuclear plant, Mantashe said. The modular nuclear plant will be constructed at Thyspunt in the Eastern Cape province, the minister said.

“Nuclear is another very important base-load commodity,” Mantashe said. “It is very efficient and reliable.”

Generation 2 would fall under Mantashe’s department, unlike Eskom, which is managed by the Department of Public Enterprises.

(Updates with analyst comment in second paragraph below story touts.)

California Avoids Blackouts But Heat Wave is Set to Worsen