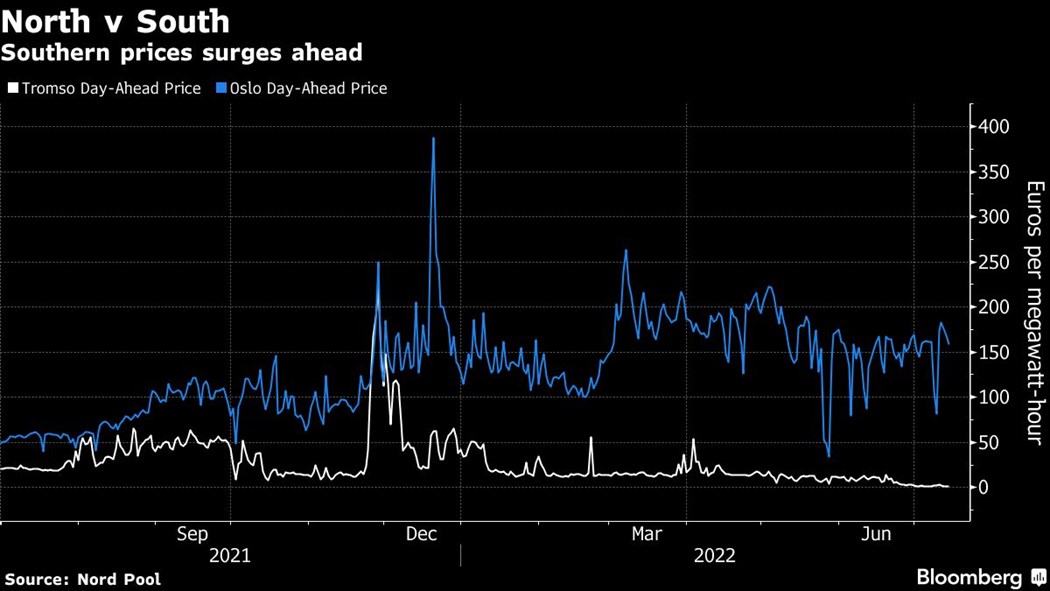 Kryptovault AS is moving operations north of the Arctic Circle, where electricity is much cheaper, Chief Executive Officer Kjetil Hove Pettersen said. Staying put would mean doubling a power bill that last year hit 202 million kroner ($21 million) and typically makes up more than 80% of the company’s operating expenses, he said.

The energy crisis gripping Europe has been exacerbated in southern Norway as a dry spring depleted many giant reservoirs that are vital for local power generation. But it’s a different story in the country’s north, where there’s ample water and it’s hard to send flows to other regions. Prices in the most northern price zone where Krytovault will set up shop are a small fraction of those in the south.

“The relocation project will of course add other expenses and complications, however, with the current conditions it is an existential requirement to do this,” Pettersen said by email. He said power costs in the south are almost 160 times more than in the north.

The huge difference is due to bottlenecks between the regional price areas. While there’s plenty of water available in the north for power generation, there’s not enough cable capacity to shift supplies south where most of the consumption is. The shortage of water is such a big problem that the government is now considering curbs to electricity exports to safeguard domestic supplies.

Norway Moves to Limit Power Exports in Blow to Europe

The amount saved by the move would depend on how much capacity the company is able to move and how quickly, as well as other unknown factors, Pettersen said. The company owns the mining machines and related infrastructure and pays for electricity, rent and other expenses, he said. While it earns money from mining, it doesn’t own or trade the actual cryptocurrency, he said.

Kryptovault currently operates data centers at two locations in southern Norway, according to its website. The new site is at Stokmarknes in the north.

Norway, like Sweden and Iceland, has lured crypto-currency miners with some of the cheapest electricity in the world. Its reliance on hydropower has provided an added factor for those seeking to cut their carbon footprint.

Sweden Prefers Steel Over Bitcoin Miners as Power Gets Scarce

The Great European Energy Crisis Is Now Coming for Your Food

Kohlberg Acquires Half Stake in USIC at $4.1 Billion Valuation