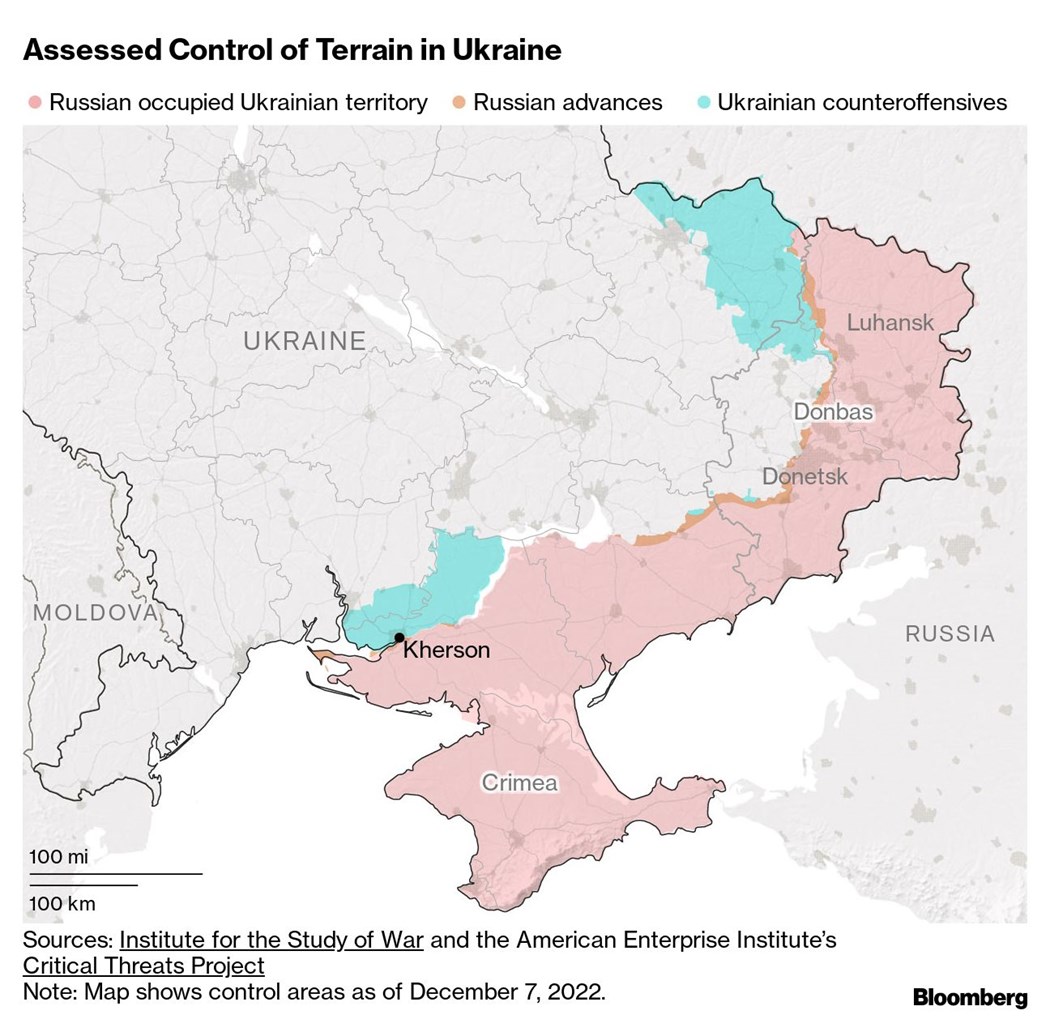 (Bloomberg) -- Russia may cut its oil production in response to a ceiling introduced by the Group of Seven nations on the price of its crude, President Vladimir Putin said.

A Moscow court sentenced an ally of opposition leader Alexey Navalny to 8 1/2 years in prison for condemning Russian killings of civilians in Ukraine, the most severe punishment to date under a “fake news” law passed to crack down on critics of the Kremlin’s invasion.

The European Union is set to bolster the size of a fund to finance weapons for Ukraine by at least €2 billion ($2.1 billion) as early as next week and the facility could be topped up later, according to people familiar with the discussions.

Over the past day Ukrainian forces have repelled Russian attacks in the areas of Belogorivka in the Luhansk region and Klishchiivka, Maryinka in the Donetsk region in the east, the General Staff of Ukraine said on Facebook.

“The frontline situation remains very difficult in the key areas of Donbas,” he said in his nightly video address. “For a long time already there is no living place left on the land of these areas that hasn’t been damaged by shells and fire.”

Bakhmut, located in the Donetsk region about halfway between the cities of Donetsk and Luhansk, has been a focus of Russia’s military effort since early August, the UK Defense Ministry said last week. While capturing Bakhmut would allow Russian forces to threaten larger urban areas of Kramatorsk and Slovyansk, it may have become “a symbolic, political objective for Russia,” according to the ministry.

Russia will impose a 35% import duty on cosmetic products from “hostile” countries, Tass reports, citing Industry Ministry. Products from the US, UK, Canada, Australia and Poland, would be affected.

The government wants to tax shampoo, hair products, toothpastes, shaving creams, deodorants and detergents, which have Russian-made alternatives, it said.

The US is concerned about Iran’s support for the Russian military, which is expected to grow in the coming months and could include the sale of hundreds of ballistic missiles to Russia, US National Security Council spokesman John Kirby told reporters Friday in Washington.

Russia may, in turn, provide Iran with advanced military components and may be providing Iran with equipment such as helicopters and air defense systems.

Kirby says the US is looking at options to bring together a group of like-minded countries to discuss Iran and Russia’s military cooperation.

The price ceiling on Russian crude is “an anti-market mechanism,” Deputy Prime Minister Alexander Novak said at a meeting with India’s ambassador. “It disrupts supply chains and could significantly complicate the situation in global energy markets,” he said, according to a statement on the government website.

Putin said in comments broadcast on state television Friday that a decision on Russia’s response to the price cap will be made within the next few days. The ceiling won’t have any negative consequences on the nation’s budget as the $60 a barrel threshold introduced by western countries is close to the current market price of Russian crude, he said.

EU nations were urged to “proceed rapidly and efficiently” with asset freezes of sanctioned Russians after the bloc’s executive found that the uneven pace at which some member states report back has a “detrimental” effect on gauging the effects the sanctions have across the bloc.

“Obtaining an up-to-date and accurate picture is essential in assessing the concrete impact of our asset freezes, comparing data and consolidating it with international partners, and effectively supporting possible enforcement action,” EU Justice Commissioner Didier Reynders and Financial Services Commissioner Mairead McGuinness said in a letter sent to nations Friday, seen by Bloomberg.

The prime ministers of Estonia, Latvia and Lithuania warned against calls for a peaceful resolution in Ukraine as too early, saying such a move would play into Russia’s hands and potentially intensify the security threat to the region.

“A pause gives them a chance to prepare a new attack and to prepare those who have been mobilized,” Estonian Prime Minister Kaja Kallas said. “I remind you, this is not only a question of Ukraine’s security, but all of Europe’s security.”

Ilya Yashin, 39, was convicted of spreading false information about the Russian military after he had questioned the official denial that its troops murdered civilians while occupying the Ukrainian town of Bucha. “I regret nothing,” he told the court in a final speech on Monday.

US President Joe Biden called Putin a “war criminal” in April after gruesome evidence emerged of massacres and torture of civilians in Bucha and other towns near Kyiv that were seized by Russian forces early in the invasion before Ukraine pushed them out. The Kremlin denies its soldiers committed atrocities. Ukraine is pressing for a special international tribunal to prosecute Russia for crimes of aggression.

Ukraine is likely to experience a power deficit throughout the winter as the nation remains without access to 40% of its pre-war generating capacity, the head of the country’s grid operator said.

Half of Ukraine’s power is being generated by three nuclear power stations, with nothing coming from the Russia-occupied Zaporizhzhia plant, Volodymyr Kudrytskyi, chief executive officer of NPC Ukrenergo, said during an online video briefing. Ukraine hasn’t been exporting any electricity since Oct. 11, he said.

Ukrainian Black Sea ports that are part of the grain exporting corridor are only operating at half capacity, Ukrainian President Volodymyr Zelenskiy told the TRT World Forum held in Turkey during a video address.

“Eighty vessels are waiting in line,” he said. On average, vessels wait three to five weeks, slowing down exports of grain.

“This is not just about trade,” he said. “This means that hundreds of thousands of people have less food on their tables.”

Finland decided to buy about €224 million worth of long- and short-range missile systems from Rafael Advanced Defense Systems, including munitions, training and spare parts.

The missiles are being procured to complement the army’s anti-tank capabilities and for the navy’s medium-to-long-range system suitable for coastal troops, the Defense Ministry in Helsinki said in an emailed statement.

Indian Prime Minister Narendra Modi won’t be holding an annual in-person summit with Putin after the Russian president threatened to use nuclear weapons in the war in Ukraine.

It would mark only the second time the leaders of India and Russia haven’t met face to face since 2000, with the state-run news service citing Kremlin spokesman Dmitry Peskov as saying the event won’t happen this year.

The International Monetary Fund’s executive board will discuss the Ukraine monitoring program Dec. 19, the IMF said on its website.

Ukraine is seeking a non-cash monitoring program from the IMF as a bridge to a full-fledged multibillion financial lifeline to shore up its reserves and budget needs.