The aim of truly sustainable vehicles will only be achieved if electric vehicle batteries are recycled. While the technologies to recover metals from batteries already exist, they need to be applied at scale. During the next few decades, battery recycling will be one of the most dynamic areas of the circular economy.

The market share of electric vehicles has risen rapidly during the past few years. Around one in three cars sold in China and around one in five cars sold in Europe currently come with a plug – they are either pure electric cars or plug-in hybrids. Looking ahead, we are very convinced about further sales growth. Across the world’s major car markets in China, the United States, and Europe, we project the market share of newly sold electric vehicles to reach 75% in 2030 and more than 95% in 2050.

Nowadays, the most common criticism of electric vehicles is that they are much less sustainable than touted, due to the massive amount of battery metals that are needed. The best way to counter this criticism is by closing the battery metals recycling loop. Looking ahead, we believe electric vehicles battery recycling will become one of the most dynamic and most valuable segments of the circular economy. According to our estimates, the metal value of the recycled batteries could reach more than USD 300 billion by 2050 based on today’s prices. Eventually, the recycling loop will be closed, paving the way for truly sustainable electric cars. 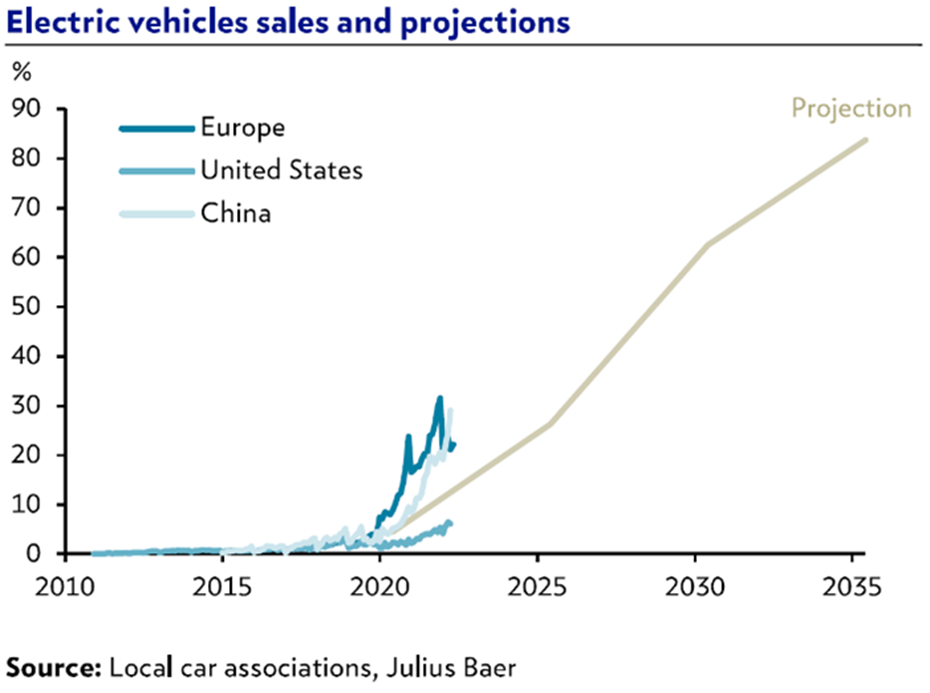 Beyond the massive growth in manufacturing capacity required to build batteries for all these electric vehicles, it is primarily the demand for battery metals that is in focus for financial markets. Across the major battery metals, we project significant demand growth during the next few decades. For aluminium and copper, which are among the largest metal markets, we believe battery-related demand will grow from less than 0.2 million tonnes in 2020 to 4.3 and 4.9 million tonnes in 2050. In contrast, the absolute growth for cobalt, lithium, and nickel will be smaller, amounting to 0.15, 3.35, and 3.0 million tonnes, respectively.

When it comes to the question of where these metals can be sourced from, the debate often only centres around primarily supplies, mines in other words. While there will be a strong reliance on mine supplies during the first couple of years, we believe that secondary supplies, recycling in other words, will grow in importance over time. Both from an environmental as well as from an economical point of view, recycling is a much better option than mining. Volume-wise and value-wise, this will be a huge opportunity, not yet today but a couple of years down the road once the first generation of electric vehicles reach their end of life. 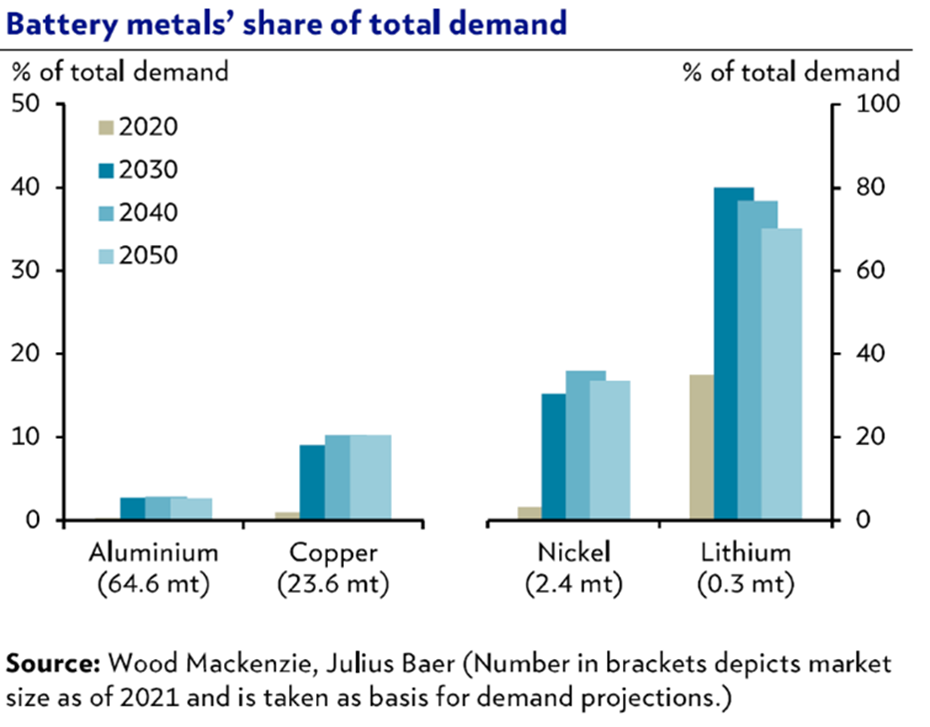 A commonly raised concern about battery metals recycling is that it has not been established yet. With regards to electric vehicle batteries, this is of course true, primarily due to the fact that not many electric vehicles have reached their end of life yet. However, as there is supply from production waste, some companies have ventured into the space already. These efforts are bearing fruit, as the companies claim to be recovering more than 90% of the battery cell materials in the recycling process. We have very high confidence in the development of the battery metals recycling value chain. Metal recycling volumes will follow the same S-Curve pattern, which we believe will describe the sales of electric vehicles, but with a lag of 10 to 15 years.

The recycling loop will be closed

The period of structural demand growth for battery metals is only temporary. No matter which metal we look at, aluminium, copper, lithium, or nickel, the peak of net demand growth will most likely be reached at some point around 2035. By 2050, recycling can cover between 70% and 85% of the demand. Eventually, the recycling loop will be closed, paving the way for truly sustainable electric cars.

The recycling of battery metals will be one of the most dynamic areas of the circular economy during the next few decades – sparked by the rapid growth of electric vehicle sales. The reasons therefore are twofold. First, battery metals recycling come with huge environmental benefits compared to primary metals production. Recycling is thus instrumental in bringing down the electric vehicle’s environmental footprint as well as the manufacturing-related CO2-emissions, paving the way to true sustainability. Second, it also comes with huge economical benefits for both the battery companies and the car companies in the form of supply security.

The conclusion for investors

It is important to acknowledge the limited investability, not just today but likely also in the future. Today, this is due to the nascent nature of the industry and the low volumes of end-of-life batteries. In the future, it could be due to a very high integration of the recycling industry, either because the recycling is performed by the battery companies or the car companies, leaving little space for independent recyclers. Due to the batteries being very crucial components of every electric vehicle, we see a very high likelihood of vertical integration.

All in all, this means that due to a potential lack of pure play companies, battery metals recycling will likely not reach the prominence it deserves in the Circular Economy investment theme despite being very relevant environmentally as well as economically. Nevertheless, the Circular Economy is a very attractive structural growth story. It may not show the same staggering growth rates as some other Next Generation themes; it is much more defensive, as the underlying global waste generation trend is very stable. The circular economy also enjoys the advantage of strong support from regulators, which should lead to lasting tailwinds.