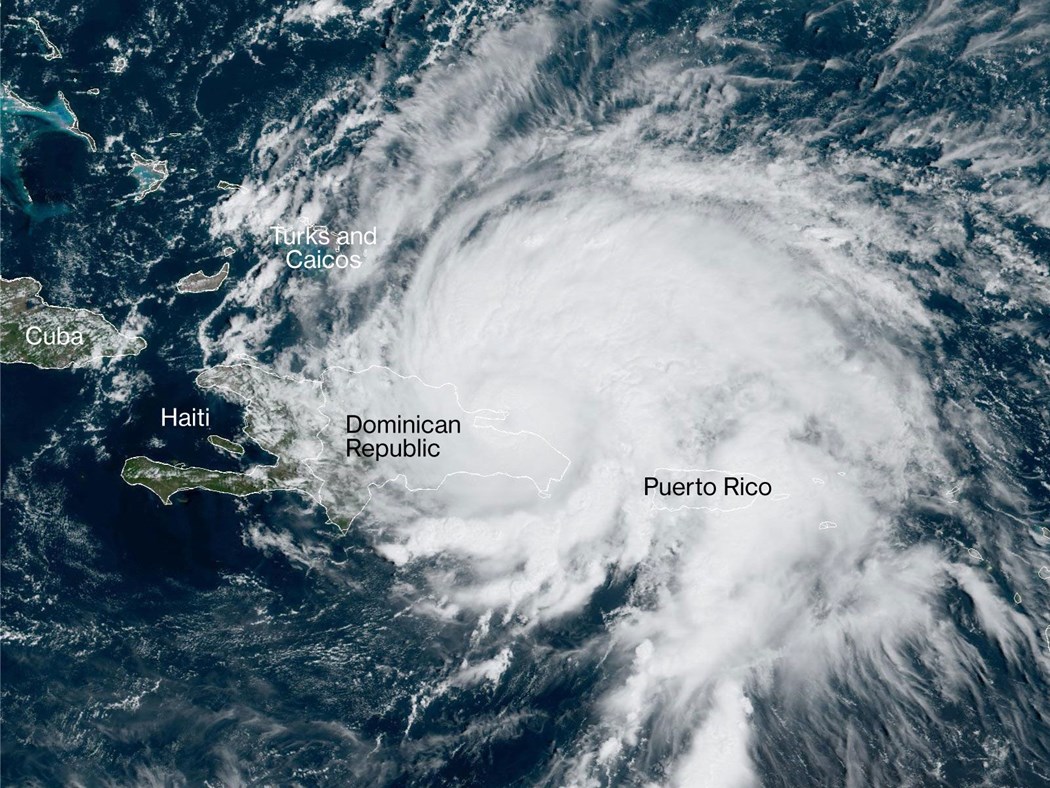 Satellite image of Hurricane Fiona on September 19, 2022, at

(Bloomberg) -- Hurricane Fiona is pumping flooding rains across Puerto Rico, where it wrecked the power grid, even as it pulls away from the Dominican Republic and gains strength in the Atlantic.

Fiona’s top winds rose to 90 miles (145 kilometers) per hour, up from 85 mph earlier, as it moved back into the Atlantic, the US National Hurricane Center said Monday in a 2 p.m. advisory. The storm is intensifying as it moves over the warm ocean water.

A long stream of thunderstorms and showers in Fiona’s wake will continue the deluge across Puerto Rico, where storm totals could reach 30 inches (76 centimeters) in some places, Jamie Rhome, acting director of the hurricane center, said in a Facebook Live post.

“That is a lot of rain over a short period of time for areas that were already saturated,” Rhome said. “Unfortunately the situation over Puerto Rico is not good.”

The entire electric grid in Puerto Rico failed after Fiona came ashore as a Category 1 hurricane Sunday, but power is now being restored to its 3.1 million residents, with priority given to hospitals and critical infrastructure. Josue Colon, executive director of the Puerto Rico Electric Power Authority, said Fiona triggered an automatic shutdown of power plants.

Several rivers across Puerto Rico have exploded over their banks. Rio Guanajibo near Hormigueros, Puerto Rico, rose nearly 18 feet in about 16 hours since Sunday and Rio Cibuco at Vega Baja rose more than 10 feet, according to the National Weather Service.

Damage could reach beyond $2 billion on Puerto Rico and an additional $1 billion to $2 billion on the Dominican Republic, Chuck Watson, a disaster modeler for Enki Research, said on his blog.

The Dominican Republic’s Emergency Operation Center said at least 11,554 clients have lost power but that the full scale of the damage is still being evaluated.

In addition, at least 54 homes had been damaged and 800 people had been evacuated from hard hit areas. At least one person was injured by a falling tree, but there were no immediate reports of storm-related deaths.

Fiona is the sixth storm of the 2022 Atlantic hurricane season and the first to cause widespread damage. While preseason forecasts called for an active season, so far the few storms that have formed have either been weak or too far out in the Atlantic to cause any lasting destruction.

If the forecast holds, Fiona will gain power as it drifts over or near the Turks and Caicos Tuesday. It could become a major Category 3 hurricane, with winds of 125 miles per hour, in three days as it nears Bermuda. The storm will send crashing surf into the US East Coast, but it won’t make a landfall on the US mainland. It could clip the Canadian Maritimes or Newfoundland by this weekend.

Meanwhile, Typhoon Nanmadol has lost power as it moves across Japan. The storm struck Kyushu Sunday, killing at least two people and forcing thousands to evacuate as it brought widespread flooding.