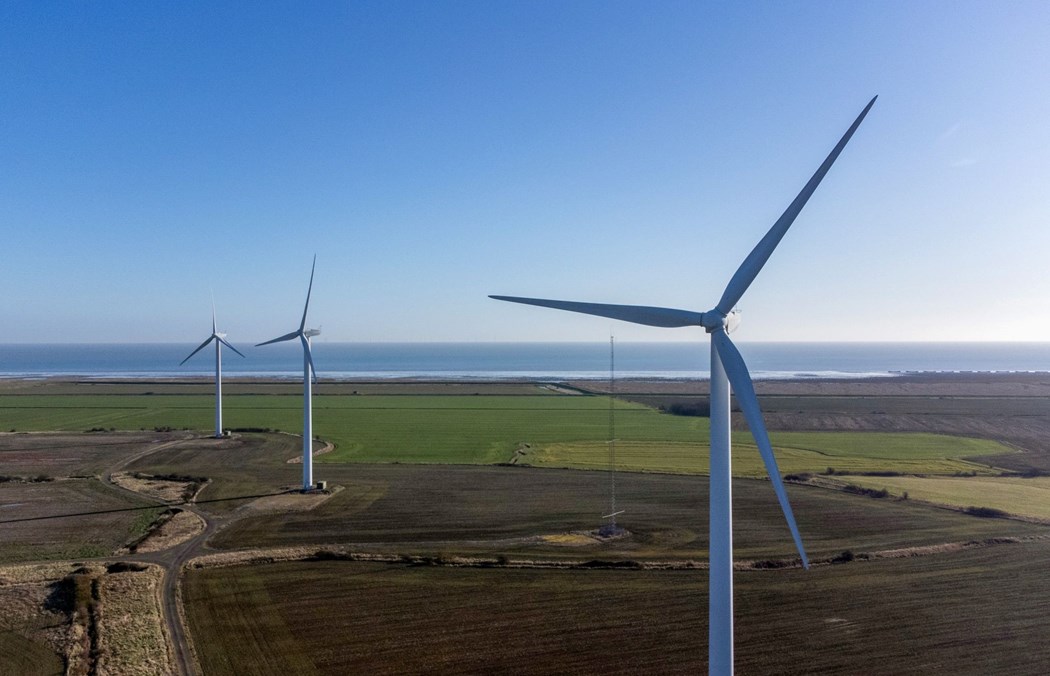 Wind turbines on the Bradwell Wind Farm, near to the decomissioned Bradwell nuclear power station, site of the planned Bradwell B project, in Bradwell-on-Sea, U.K., on Friday, Feb. 11, 2022. British regulators approved a Chinese-designed nuclear reactor that could be used at the plant in southeast England being developed by China General Nuclear Power Corp. Photographer: Chris Ratcliffe/Bloomberg

Both Truss and Johnson signed an amendment to the government’s Levelling Up legislation brought by Tory MP Simon Clarke -- who served in Truss’s cabinet -- which would ease current restrictions on onshore wind. It’s their first public act of dissent against Sunak’s government.

Building onshore wind farms is one of the quickest and cheapest ways to add new electricity generation, requiring far less time and equipment than their giant counterparts offshore. They could be critical to meeting the UK’s net zero carbon emissions target by 2050, while also helping to wean the country off expensive, imported natural gas that’s driving a cost-of-living crisis.

In a government auction earlier this year, onshore wind farms agreed to sell electricity for less than half the current wholesale power price in Britain.

Truss and Johnson’s support for the measure shows how Britain’s two most-recent premiers may not intend to make life easy for the current incumbent of 10 Downing Street, and highlights the deep divisions in the Conservative Party that Sunak must manage. Sunak’s authority in Westminster has already been damaged -- he was forced to pull a vote on major housebuilding plans due next week after some 47 Tory backbenchers signed an amendment that threatened to defeat the government -- and he is struggling to overturn a major deficit in the polls.

Party management is one of the trickiest issues facing Sunak, along with a grim economic outlook and a recent series of ministerial scandals. Without having won a general election as leader, Sunak doesn’t enjoy the widespread party loyalty that Johnson had in 2019 and is in danger of overseeing a faltering policy program.

Johnson and Truss, and the MPs who remain supportive of them, have the ability to make his life even more difficult. Some of Johnson’s allies partly blame Sunak for the former premier’s downfall, while Sunak fired many of Truss’s supporters from government -- including Clarke -- when he became prime minister, creating a rump of potential trouble-makers.

Many of them share a common view that Sunak isn’t doing enough to spur economic growth, which was the overarching aim of Truss’s short-lived premiership, and hence want him to support initiatives such as onshore wind. Clarke argues that onshore wind would generate growth and also boost Britain’s energy independence.

In September, Truss’s government announced plans to make it easier for onshore wind projects to get the go-ahead, but Sunak reversed her proposals. Onshore wind developments have faced an effective ban in Britain since 2016.

(Adds context in third paragraph, comment in fourth and chart after fifth)