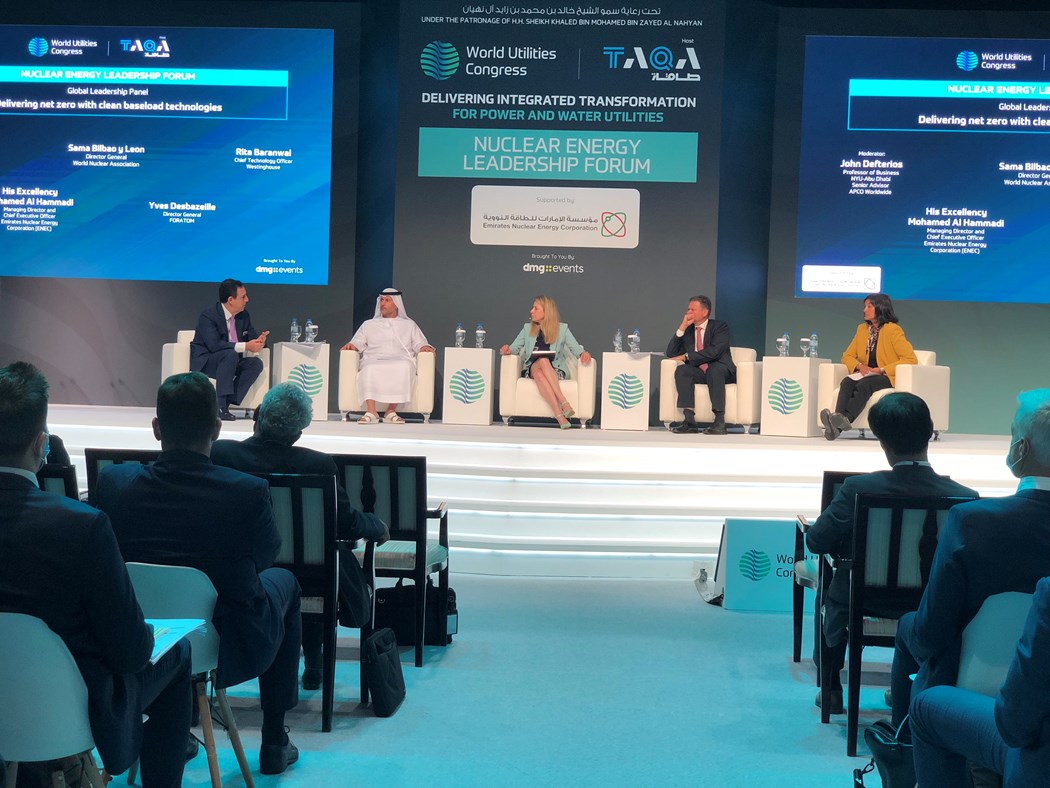 Having nuclear power as part of the energy mix for a major oil and gas producer as the UAE is a huge competitive advantage in balancing energy security and sustainability as the world moves towards a low carbon future, said specialists at the Nuclear Energy Leadership Forum at the World Utilities Congress (WUC) in Abu Dhabi on Monday.

“The Barakah Nuclear Plant is not only a strategic priority for the UAE’s energy sector and future economic growth, but also the largest source of clean energy in the Arab world,” according to Mohamed Al Hammadi, CEO of Emirates Nuclear Energy Corporation (ENEC).

The Al Dhafra-based nuclear facility recently added a further 1,400 MW zero-carbon emissions electricity capacity to the UAE’s transmission grid with the commissioning of Unit 2, bringing the total capacity produced by Barakah’s both units to 2,800 megawatts.

The nuclear plant is now halfway towards its goal of providing 25 percent of the UAE’s electricity needs through clean electricity whilst rapidly decarbonizing the nation’s power sector, Al Hammadi said.

The UAE’s peaceful nuclear power strategy is not only set to save the nation $7.4 billion annually by saving precious oil consumption but will also help develop technology that ultimately helps with pace exploration, medicine and even food security, he said.

The UAE’s nuclear energy industry has enabled disruptive economic growth, with solid policies and technology blending with global cooperation to produce a nuclear model that the IAEA was now recommending to other countries globally, Al Hammadi said.

At the same time, it has swiftly become a critical component of the UAE’s future energy mix and energy security in a rapidly changing energy industry. “There can be no price tag for energy security,” Al Hammadi said.

He said that the next generation of small modular reactors (SMRs) presented a good opportunity for the UAE, where the nuclear industry was only at the tip of the iceberg. Collaborations with ADNOC will also help the UAE produce the lowest carbon barrel of oil, he said.

Focusing on proactive measures for decarbonisation, curbing emissions, and attracting the long-term capital investment needed for a sustainable future, the World Utilities Congress brings together more than 10,000 global utility professionals to explore critical topics, including the future of low carbon energy and water supplies.

While nuclear energy has been proven to be a viable and cost-effective option in the energy dynamics of the future, the financing of new nuclear projects around the world is not yet at the level needed, according to Sama Bilbao y Leon, Director General of the World Nuclear Association.

“Around 75 percent of the cost of any nuclear electricity comes from interest of the project financing. That’s why affordable financing is very critical in the coming days – and will pave the way for successful projects such as in the UAE. This will also give the energy industry and the international community more confidence and assurance, while creating the scope for building smaller reactors and SMRs,” she said.

Despite the clamour for nuclear energy globally, the situation in Europe needed to change radically for any effective chance of combating climate change and embracing energy transition, according to Yves Desbazeille, Director General of FORATOM – the Brussels-based trade association for the nuclear energy industry in Europe.

“Europe has set for itself very ambitious goals of achieving net zero emissions by 2050. This needs at least 30 percent emissions to be curbed by 2030. However, this is a total paradox since Europe’s new energy mix does not include nuclear at all – purely due to ideological reasons. This is something not being addressed by European institutions,” Desbazeille told delegates at the session.

Citing Germany as a case study, he said that the country has spent 300 billion euros in renewable energy to reduce emissions in the past decades – but its level of emissions has remained unchanged.

“The realistic way to combat climate change in Europe is to keep the 137 nuclear reactors across the continent ready for operations – they can contribute to 27 percent of Europe’s energy mix. Otherwise, the continent’s net zero goals are climate criminal in a way,” Desbazeille said.

Concurring with him, Dr Rita Baranwal, Chief Technology Officer at Westinghouse, pointed out that continuity of nuclear energy policy is very important.

“Now that nuclear is considered green by most countries around the world, it opens up many new opportunities for planning and financing it. There is an urgent need to deploy new nuclear reactors to combat climate change. Nuclear energy is the most inexpensive way to decarbonise any energy system,” she said.

Westinghouse, one of the world's leading suppliers of nuclear technology, is now preparing to provide a 100-year lifespan for nuclear reactors it helps deploy around the world, said Baranwal, who served as the former Assistant Secretary for the Office of Nuclear Energy in the US Department of Energy (DOE).

WUC 2022 Live: clean energy mix must be affordable and sustainable