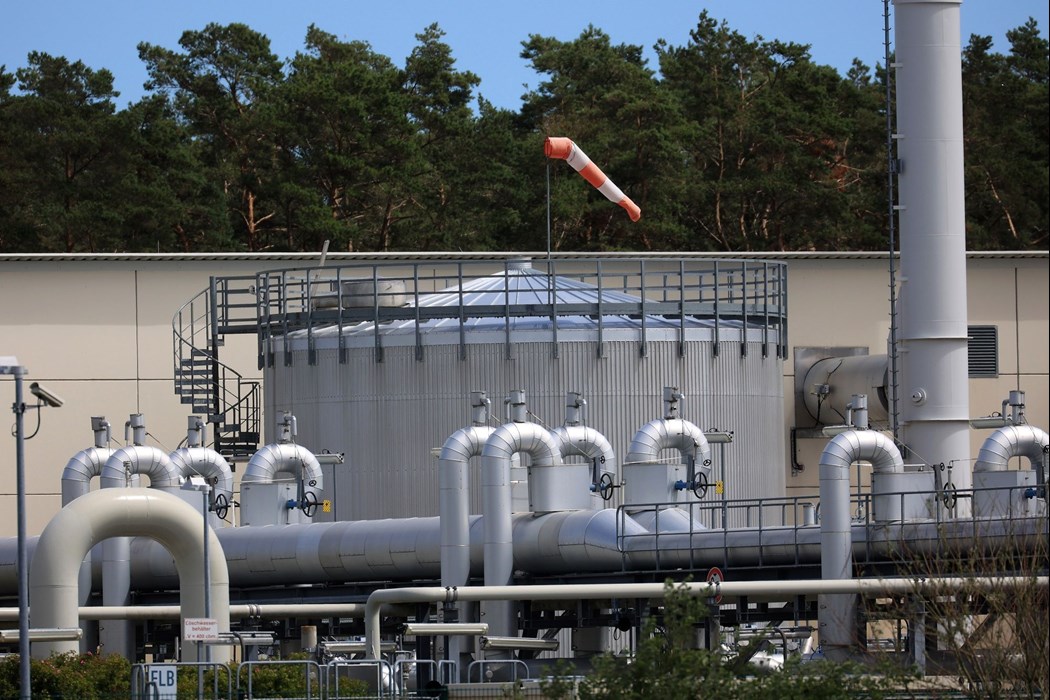 A windsock indicates wind direction above a storage tank at the gas receiving compressor station of the Nord Stream 1 natural gas pipeline in Lubmin, Germany, on Monday, July 11, 2022. Russian natural gas shipments to Europe via the Nord Stream pipeline to Germany are due to stop on Monday because of planned annual maintenance.

Just when it seemed the raft of economic challenges that have haunted investors this year had been priced in by financial markets, a spiraling energy crisis in Europe is threatening to provide a fresh jolt to equity traders’ playbooks.

Those sectors and countries with a heavy dependence on Russian fossil fuels have most at stake. Germany’s major heavy-manufacturing companies are big gas importers and the nation’s DAX index has a 45% exposure to chemicals, autos and industrials. Yet Europe’s economy so far has remained resilient and the full extent of the risks is proving tricky to gauge for investors.

“We really have no framework for judging how this thing is going to evolve,” said Paul O’Connor, head of multi-asset at Janus Henderson Investors, adding that the significance of the crisis “could be substantial.”

Some vulnerabilities are obvious. A Citigroup Inc. basket of stocks sensitive to a gas shock has underperformed the broader market this year. It includes BASF SE, Covestro AG, Thyssenkrupp AG and Siemens AG as well as carmakers such as BMW AG and Mercedes-Benz Group AG, and the utilities E.ON SE and Uniper SE.

According to Esther Baroudy, a senior portfolio manager at State Street Global Advisers, consumer-related sectors are “relatively vulnerable” to rising energy prices. Mass-market type businesses with thin margins will suffer the most, as “they will have a double whammy from both the cost of energy and logistics, and the revenue side as customers’ spending power is hit by inflation,” she said.

The retail subindex is the worst performer in the Stoxx Europe 600 gauge this year, falling 29%, while the travel & leisure and consumer-products segments have also lagged behind, weighed down by sinking consumer confidence.

Read More, An Energy Crisis May Be Next Big Stumbling Block: Earnings Watch

Should Russia halt gas flows to Europe entirely, corporate earnings stand to fall by 10%, Citigroup strategists estimate, while UBS Group AG economists see a potential hit of more than 15%. Member states of the European Union reached a political agreement Tuesday to cut their gas use by 15% through next winter in an effort to soften the blow of a total cutoff, which looks increasingly likely.

Energy shares, the only European industry group in the green this year, remain a popular hedge. While oil prices have come off recent highs, they are still hovering above $100, more than 40% above 2021’s average.

“While prices remain high, oil and gas names are one of the only sectors offering positive returns,” said Louise Dudley, a global equities fund manager at Federated Hermes. She also pointed to US utilities as an area delivering strong results.

The scramble to move away from Russian fossil fuels has put the spotlight on alternatives, with Europe’s Renewable Energy Index outperforming the wider benchmark this year. The ability of the region’s green-power producers to meet heavy demand quickly enough is called into question, however.

“Governments can’t take a straight road toward renewables; compromises have to be made in this crisis and this is reflected in stock prices,” said Jens Zimmermann, senior analyst at Credit Suisse Group AG.

He sees US liquefied natural gas producer EQT Corp. as the main beneficiary of the crisis, alongside other LNG transporters and companies like Williams Cos Inc., Cheniere Energy Inc. and Tellurian Inc. In Europe, shippers such as Shell Plc and TotalEnergies SA, as well as Switzerland’s Burckhardt Compression Holding AG are among his top picks.

Still, the ripples and indirect consequences of Europe’s escalating energy crisis are likely to reach further than imagined, leaving no sector untouched.

“There will be some companies considering limiting lines or dialing down shift patterns,” said Danni Hewson, financial analyst at AJ Bell Plc. “It’s a jigsaw, full of uncomfortably spikey pieces that might not form the picture many businesses had been looking for.”