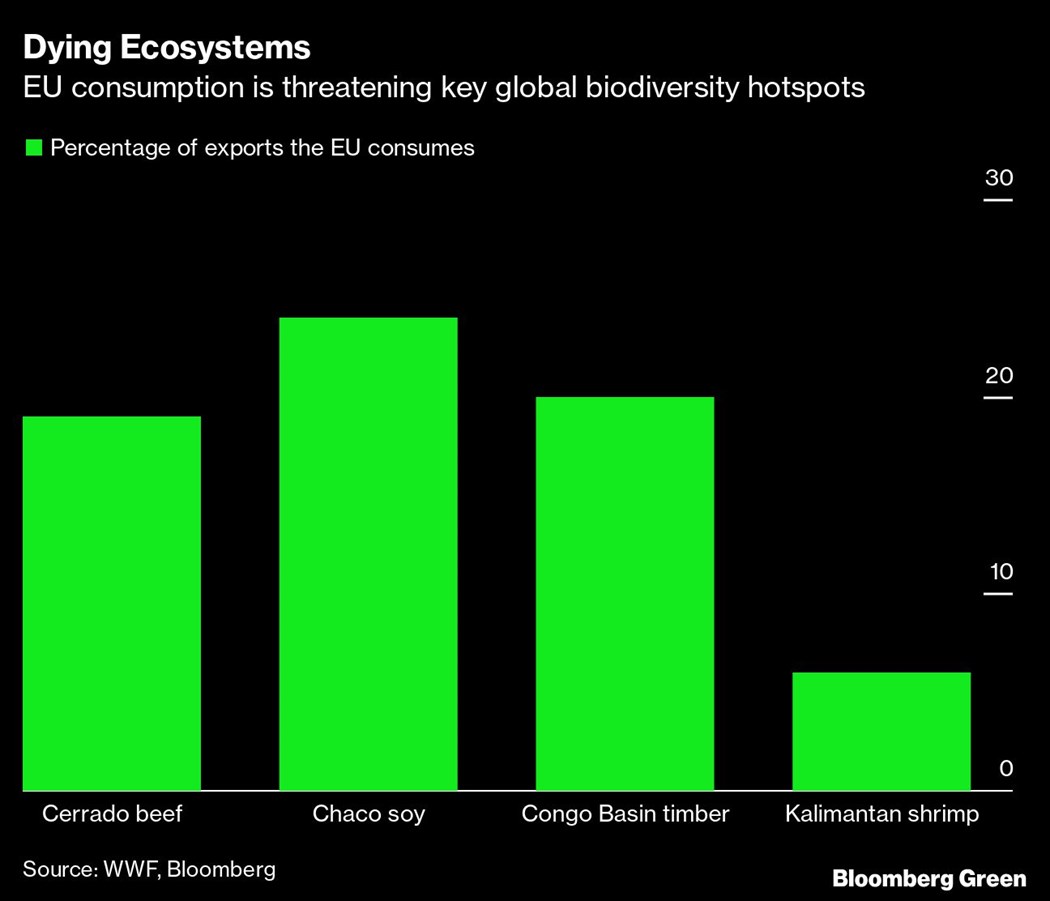 The European Union could be responsible for destroying some of the world’s important carbon sinks and a few remaining pockets of biodiversity if it doesn’t do more to curtail the environmental impact of its consumption of commodities, according to the WWF.

(Bloomberg) -- The European Union could be responsible for destroying some of the world’s important carbon sinks and a few remaining pockets of biodiversity if it doesn’t do more to curtail the environmental impact of its consumption of commodities, according to the WWF.

More than half of South America’s Cerrado, the world’s most biodiverse savannah, has been cleared largely as a result of soy and beef production, with the EU responsible for 19% of the region’s beef exports. Other ecosystems such as the Argentine Chaco, Sumatra’s peatland and the Cuvette Centrale in Democratic Republic of Congo similarly have been affected by the bloc’s demand for palm oil, timber and other commodities, the group said in a report released Tuesday.

An EU measure proposed last year is designed to curb the slashing of woodland spurred by the bloc’s consumption. Companies would have to collect the geographic coordinates of where their commodities originated, and national authorities would have to ensure that only products considered deforestation-free enter the market. The commodities covered include soy, beef, palm oil, wood, cocoa and coffee, and some derived products such as chocolate, leather and furniture.

The risk is that by focusing on predominantly forested areas, the EU inadvertently could incentivize producers to shift their operations to other valuable ecosystems.

The WWF said that it would be feasible for companies to expand their due diligence systems to other ecosystems, given that existing laws like the EU’s renewable energy directive already extend to those beyond forests.

The WWF and other environmental advocates want the EU to include ecosystems like savannahs, grasslands, peatlands and wetlands in the law. Europe is the second-largest importer of deforestation and its associated emissions after China, the WWF report said.

“The European Commission’s wait-and-see attitude is an inadequate response to the breakneck speed at which these ecosystems are being destroyed,” said Anke Schulmeister-Oldenhove, senior forest policy officer at WWF’s European Policy Office. “In times of climate emergency and accelerating loss of species, the EU cannot turn a blind eye to the loss of natural ecosystems beyond forests.”

At the COP26 climate change talks in Glasgow, Scotland, last year, 100 countries representing 85% of the world’s forests committed to halt and reverse the loss of woodland and land degradation by 2030. Worldwide, an area of forest the size of 27 soccer pitches is lost every minute, according to the U.K.

UK government will not intervene to curb carbon market prices