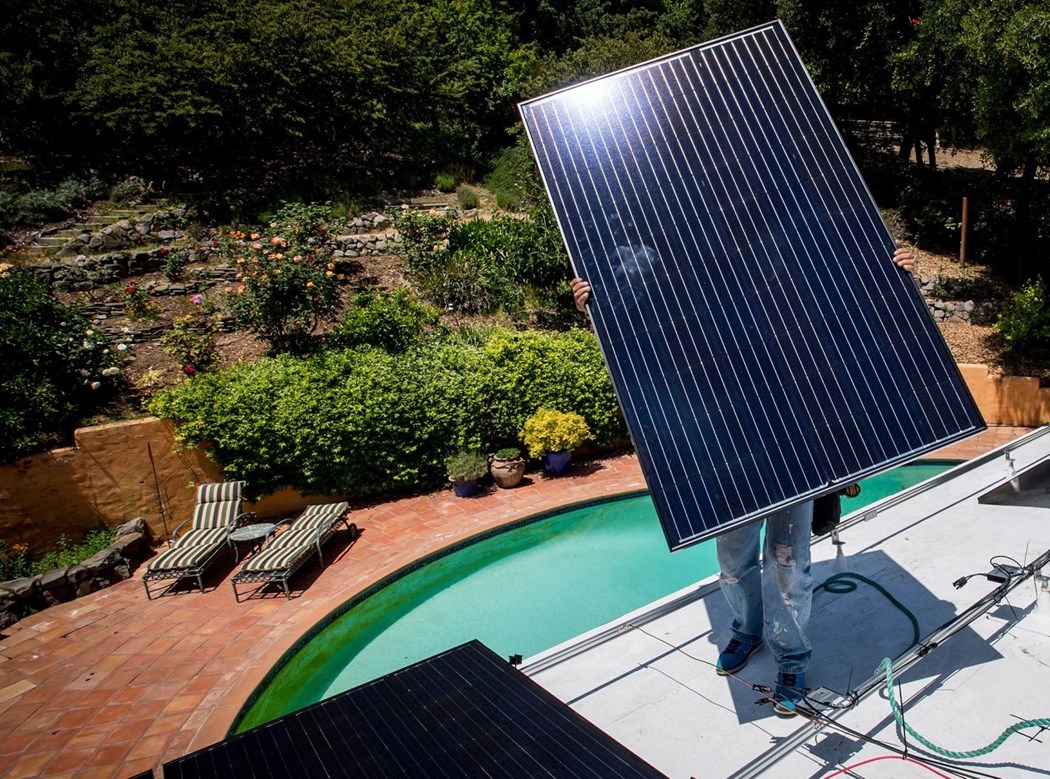 A worker installs solar panels on the roof of a home in Lafayette, California.

(Bloomberg) -- If signed into law as written, the climate bill before the US Congress would change the calculus for American households thinking about going solar. The legislation stands to make that transition more affordable while also subsidizing purchases of electric cars, heat pumps, high-tech water heaters and battery-storage systems — clean-energy upgrades that will spur more household demand for electricity. There are so many incentives to install solar that the Inflation Reduction Act of 2022 might be more aptly titled the “Electrify Your Life Act.”

“As your costs for electricity go up, the reason to go solar will become even stronger,” said Vikram Aggarwal, founder and chief executive of EnergySage, a Boston-based company that operates an online solar marketplace for consumers.

The climate bill, a surprise agreement between Senators Joe Manchin and Chuck Schumer, would restore a 30% tax credit for residential solar systems — making it applicable to panels installed in 2022 – and extend the program to Jan. 1, 2034. Leased or purchased battery storage systems would likewise qualify for a 30% credit, which can also be taken in 2023 for homeowners who buy batteries.

“There's no question in my mind that all these incentives will make the difference for consumers on the fence about solar, accelerating access to the technology for Americans across the country,” said Suzanne Leta, senior director and head of policy and strategy at residential solar company SunPower Corp. “Especially those that are low to moderate income.”

Since its inception in 2006, the solar tax credit has repeatedly expired and been revived, often at the eleventh hour. For 2022, the tax credit fell to 26% and had been set to decline to 22% next year before ending in 2024. Considered altogether, the climate bill’s consumer incentives are also mutually reinforcing. Electrifying a home with solar energy that’s used to charge an EV eliminates fossil fuel costs as well as greenhouse gas emissions. Battery systems let homeowners store excess solar energy generated during the day and tap it at night to avoid high utility electricity rates. (Batteries also help keep the lights and internet on during increasing climate-driven blackouts due to extreme weather.)

Depending on local utility rates, electric cars and home electrification could also significantly reduce the payback period for solar panels thanks to savings on electricity costs, according to energy experts. Once homeowners do recoup their investment in a solar system, the electricity it generates would essentially be free outside of maintenance and service fees charged by a utility to connect to the power grid.

“I would absolutely expect the payback time to improve,” said Sachu Constantine, executive director of Vote Solar, an Oakland, California-based nonprofit that advocates for state clean energy policies. “EV charging alone accelerates payback … and when we also consider building and appliance electrification, I see no reason why the same effect wouldn’t hold.”

How solar can pay for itself

Calculating solar payback times is complicated. Among other things, the time frame for recovering your investment depends on local utility rates, the price your power company pays for the solar electricity you supply and any surcharges for connecting a solar system to the grid. Another important factor is whether your rooftop system is correctly sized to match your home’s power demand, especially if you plan to both electrify your house and acquire electric cars.

The math is further muddied by inflation, tariffs, supply chain snarls and labor costs that have for the first time resulted in an increase in the cost of generating solar electricity, after two decades of dramatic declines. The median cost per watt of a solar system in the US rose 3.4 % between the second half of 2021 and the first half of 2022, according to a forthcoming report from EnergySage.

Still, solar return-on-investment calculators can give a rough estimate of the payback period. For instance, I live in a temperate area with high utility rates but use too little electricity to justify the expense of installing solar panels. If I added an electric car, heat pumps and other appliances to the mix, however, the estimated payback period for a $30,000 solar system to power all those devices would be around four years with the current 26% tax credit.

“Solar becomes more valuable when paired with technologies like these,” said Aggarwal.

The Inflation Reduction Act will make many of those technologies cheaper, too. Rebates for home electrification include up to $8,000 for a heat pump, which could cover about a third of the cost of some systems that heat and cool homes. The rebate of up to $1,750 for heat pump water heaters would cover the entire cost of several models. The $840 rebate for induction stoves would pay about two-thirds of the cost of many high-efficiency cook tops. There’s also a $4,000 rebate to upgrade a home’s electrical system, often necessary before solar and battery storage systems can be installed.

John Berger, chief executive officer of residential solar company Sunnova Energy International Inc., said he expects a potential bump of the solar tax credit to 30% would initially have a marginal impact on homeowners’ willingness to convert. “What's driving consumers right now is power prices doubling and tripling and gasoline doing the same thing,” he said, adding that Sunnova customers are buying solar-and-battery storage systems as a hedge against weather-related power blackouts, especially as they work from home more often. Berger does think the 12-year extension of the tax credit would give companies the certainty they need to make bigger investments to lower solar energy costs.

That extension would also forestall what Aggarwal called “a run on the bank” by solar customers before existing tax credits expire in 2024. That kind of spike in demand would further exacerbate supply chain and labor constraints, triggering more price increases.