The Great European Energy Crisis Is Now Coming for Your Food 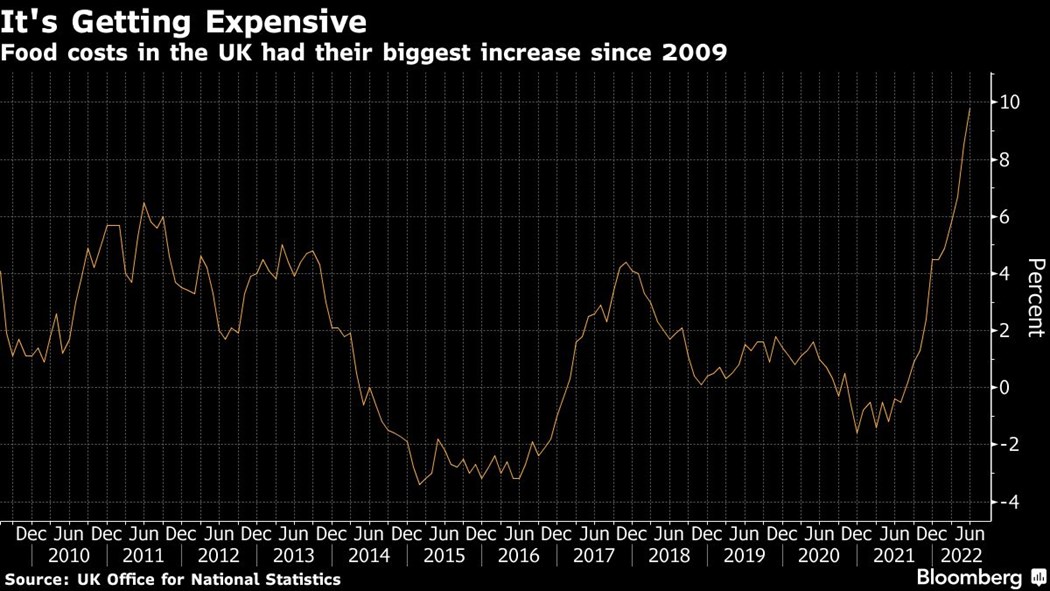 (Bloomberg) -- At Brioche Pasquier’s 240,000 square feet factory about an hour away from London, every roll that comes out of giant gas-fired ovens now costs at least 50% more to make.

From butter to eggs and sugar, most of the raw materials the French baker uses to make croissants, brioches and pains au chocolat had already increased in price as commodities rallied over the past year. But the company is now also contending with soaring energy bills.

It’s a double whammy for food makers, and a cost that’s quickly felt in the pocket of consumers grappling with a cost-of-living crisis. In the UK, the Bank of England expects inflation will peak at more than 13% this year, a third of UK households are set to spend more than 10% of incomes on energy, and now surging grocery costs are driving up food poverty.

“It is the domino effect that has happened with us having to take a huge increase on energy,” said Ryan Peters, the managing director of Brioche Pasquier UK Ltd., who runs the factory in Milton Keynes. “We have to try and raise our prices to retailers a little bit, and unfortunately that goes on to consumers.”

World food prices hit a record earlier this year as Russia’s invasion of Ukraine starved the world of key products including wheat and vegetable oils. And while global costs have started to ease -- dropping for a fourth month in July -- consumers are unlikely to get much reprieve.

That’s because food makers in Europe are now contending with high energy prices, with gas, coal and electricity trading at multiples of normal levels. And the worst is yet to come as dark and freezing winter days set in, boosting demand for energy for heating and power generation.

“Whether it’s roasting coffee or making sugar from beets, companies are so far only talking about the increase in raw materials,” said Kona Haque, head of research for commodities trader ED&F Man. “I think the worst is still to come as energy prices rise. This winter will be a game changer and processing costs will likely go up.”

Suedzucker AG, Europe’s largest beet-sugar producer, said earlier this year that a “substantial rise” in raw material, energy and packaging costs had offset increased revenues in the first quarter. Allied Bakeries, maker of Kingsmill and Allinson’s bread said in June that higher input costs continued to adversely affect margins despite sales being ahead in the third quarter.

Companies turning soybeans, rapeseed and sunflower seeds into cooking oils are slowing output in the UK and Europe and shifting production to other regions with lower energy prices. Oilseeds processing in the UK and Europe fell 3.2% in June to the lowest level since at least 2019, data from industry group Fediol showed.

The outlook is so dire that governments have started to step in. The European Union last week approved an aid package of 110 million euros ($112 million) to support companies in the agriculture sector that have been affected by the increase in energy, fertilizers and other raw materials due to the war in Ukraine. Other countries may follow suit.

“The agricultural sector has been hit particularly hard by the price increase of energy and other input costs caused by Russia’s invasion of Ukraine and the related sanctions,” said EU Antitrust Commissioner Margrethe Vestager. “We continue working closely with member states to ensure that national support measures can be put in place in a timely, coordinated and effective way.”

Energy-intensive food factories across Europe could be forced to shut down if natural gas shortages spark rationing. Germany has already enacted the second of a three-stage emergency plan, and the next could trigger shutdowns across industries. The UK also has a plan that involves reducing or cutting supplies to factories. Such worst-case scenarios could result in even higher grocery costs.

In the eastern part of London, Tate & Lyle Sugars is working hard to ensure it can continue to supply customers every day from its refinery in Silvertown by the Thames, said Gerald Mason, senior vice president at the company owned by American Sugar Refining Inc.

“Just like people are grappling with their home budgets, we’re having to manage highly volatile energy and input costs, making sure every penny our business spends and gets as income is actively managed in real time,” he said. “We’re not running a casino. We’re making food, which gives us a big responsibility to get it right.”