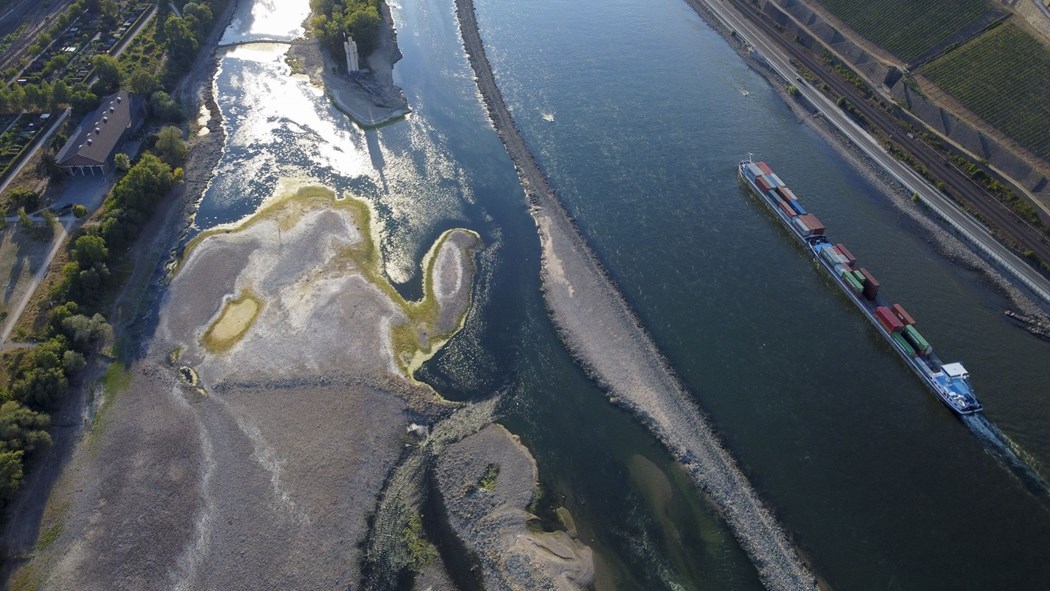 A barge travels past exposed riverbed on the River Rhine near Bingen, Germany, on Friday, Aug. 12, 2022. The Rhine River fell to a new low on Friday, further restricting the supply of vital commodities to parts of inland Europe as the continent battles with its worst energy crisis in decades.

Benchmark futures increased as much as 8.6%, after settling 6.8% higher on Monday. Hot and dry weather is causing river water levels to drop rapidly, hampering the transport of energy commodities. It’s likely to force utilities to use more gas as a replacement at a time when supply from Russia continues to be curbed.

“The seemingly inexorable move higher in European natural gas continued,” analysts at Deutsche Bank Research said in a note. “Prices have been bolstered by the latest European heat wave, which has seen rivers dry up and caused issues with fuel transportation, further compounding the continent’s existing woes on the energy side.”

The water level at a key point in the Rhine -- western Europe’s most important river for the transport of fuel and other industrial goods -- hit a new low this week, making it uneconomical for many barges to transit. Energy prices in Europe have been soaring after Russia cut gas supplies, including via the key Nord Stream pipeline, slamming the region’s economy.

Dutch front-month futures, the European benchmark, rose 7.9% to 237.70 euros a megawatt-hour as of 12:37 p.m. in Amsterdam. Prices are more than 11 times higher than the seasonal average of the past five years.

Russian gas giant Gazprom PJSC estimates that if the current trend in the European market continues, gas prices could surge above $4,000 per thousand cubic meters this winter, Gazprom said in a statement Tuesday. That’s equivalent to about 347 euros per megawatt-hour, above the record 345 euros the benchmark Dutch contract briefly posted in early March in the aftermath of Russia’s invasion into Ukraine.

Meanwhile, the standoff continues between Germany and Russia over a Nord Stream pipeline turbine that’s been stuck in transit after repair works were carried out in Canada. Moscow cut gas shipments through the link to 20% of capacity last month, citing technical problems. Germany’s Economy Minister Robert Habeck said Monday the turbine is available and that Russia was using the equipment as an “excuse” to cut supplies to Europe.

The German government, in its push to secure alternative supplies, on Tuesday signed a deal with the nation’s major energy companies to import liquefied natural gas through two new terminals this winter.

But LNG -- which has helped Europe fill up storage sites as Russian supply fell -- may also become more difficult to get as competition for cargoes ramps up. High temperatures are increasing demand in Asia, while companies in the region are also boosting purchases to stockpile for the winter.

“There is a sense of urgency in South Korea, and to a lesser extent, Japan, to rebuild stockpiles ahead of winter as high temperatures have intensified withdrawals,” Olympe Mattei, a BloombergNEF analyst, said in a report.

Even so, an LNG cargo was sent from Australia to the UK via a ship-to-ship transfer in Malaysia, marking an unusual source of supply for energy-starved Europe.