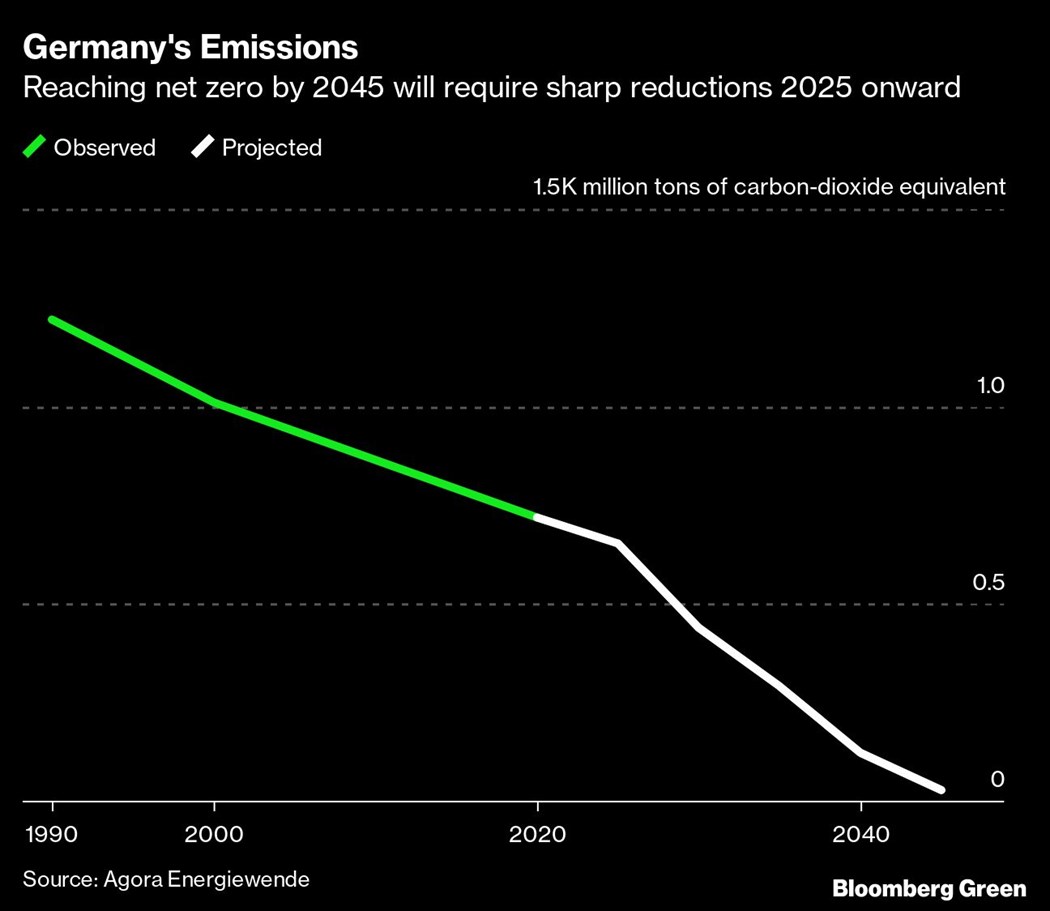 (Bloomberg) -- Germany is shaking up the global climate movement with a single declaration.

Chancellor Angela Merkel’s ruling coalition said on Wednesday it will aim to eliminate greenhouse gas emissions by 2045, five years earlier than its previous goal and the shortest timeline among major economies. Policymakers are working on a new climate law that will raise Germany’s short-term reduction targets above its European Union peers.

The bold decision stands out even at a time when some of the biggest polluters are making monumental promises. China surprised the world in September with a 2060 pledge, the U.S. wants to cut emissions in half by 2030, and even India is under pressure to set a net-zero goal. Germany’s new target puts it ahead of all these countries — and could pave the way for others to boost their ambitions.

“It will absolutely help other European countries and some outside to go faster toward net zero,” said Richard Black, senior associate at the Energy & Climate Intelligence Unit. “If Germany is doing it, that’s a signal to other countries that it’s a pretty sensible thing to do.”

Getting to net zero by 2045 is a huge undertaking. Germany will have to cut emissions not just from the electricity sector that’s benefitting from cheaper renewables and batteries, but also from factories making steel and cement that don’t yet have economical clean alternatives.

The target is achievable, according to a report published last month by the think tank Agora Energiewende. To get there, Germany will have to double its pace of emissions cuts to 30 million tons annually over the next 25 years, largely by boosting the supply of renewable energy even as coal, gas and nuclear plants are shut.

Coal power generation will have to be phased out by 2030 — sooner than the current 2038 target. Industrial emissions can be tackled by introducing cleaner methods of making steel and boosting the use of green hydrogen. Homes and offices would have to cut their carbon footprint by deploying 6 million heat pumps and growing district-heating networks.

One major challenge will be tackling pollution from its dominant auto industry. Germany will need 14 million electric vehicles on the road by the end of the decade, the Agora study showed, compared with the 10 million it’s currently targeting. In the past, the influential auto lobby has pushed back against efforts to cut pollution and rejected calls for an electric-only future. But with giants like Volkswagen AG and Daimler AG now planning rapid electrification of their fleets, a once unthinkable ban on combustion engine cars may be possible.

To help finance the transformation, Economy Minister Peter Altmaier proposed establishing a private fund that would be able to take on debt without it showing up in the federal government’s accounts and breaching constitutional limits on borrowing.

A number of factors led to the 2045 announcement. In an unprecedented ruling last week, Germany’s highest court said that the existing climate law put young people’s future at risk by leaving most of its emissions cuts to after 2030. The Greens party has surged ahead in polls ahead of a September election as voters focus on climate change as a major issue, putting pressure on Merkel’s coalition to burnish its green credentials.

“We're seeing a kind of race to net zero, with parties topping up each other's announcements,” said Brick Medak, head of the Berlin office at European think tank E3G. Meanwhile the court decision could spur similar legal action elsewhere, he said. “The German supreme court is very influential. This ruling will have a huge impact on similar discussions in other EU countries.”

The government reacted swiftly to the court ruling. Policymakers are already debating the new climate legislation, which is expected to be approved by Merkel’s cabinet next week. The revised German target will cut emissions 65% by 2030, relative to 1990 levels, up from the previous goal of 55%. That will put it second only to the U.K., which wants to reduce pollution 68% over the same period.

Even with Germany’s new commitment, world leaders will have to do more. Current national climate pledges put the world on track to warm 2.4 degrees Celsius by the end of the century, according to an analysis by nonprofit Climate Action Tracker released before the German announcement. That falls short of the Paris Agreement’s 2°C threshold and remains far behind its 1.5°C aspiration.

Regardless of who wins the German elections, the number of leaders with a climate mandate is set to grow at the G-7 and G-20 meetings later this year and the move will raise the bar for global climate talks in November.

“Germany and the U.K., along with the reinvigorated U.S., will pile on pressure on countries such as Japan that have not unveiled all the details of how they plan to meet net-zero goals,” said Black. It may even push laggards like Australia and Saudi Arabia to do more.

Germany has led the way in the past. Investments in solar energy in the early 2000s helped make the renewable source of power cheaper around the world. Last year, the government unveiled the world’s greenest stimulus to revive the pandemic-hit economy. It set out a plan to spend 130 billion euros ($156 billion) largely on green technologies and climate-friendly industries.

“If Germany invests in technologies, they become cheaper and more readily available to other countries,” said Black.