US Redoubles Efforts to End Dependence on Russian Nuclear Fuel 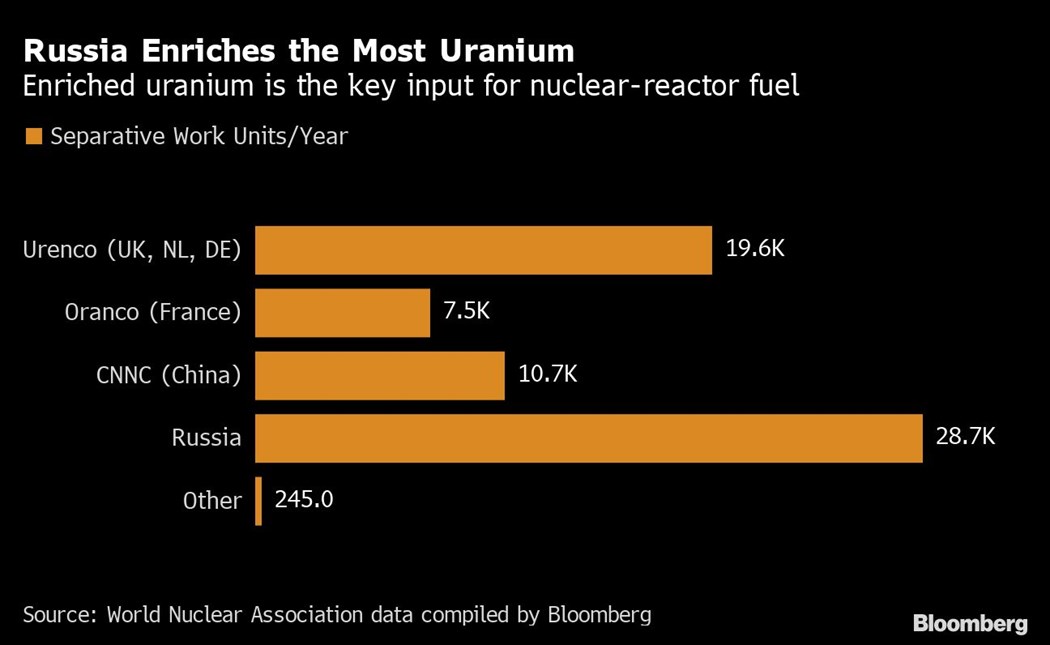 (Bloomberg) -- The Biden administration’s top energy official said the US will redouble its efforts to break free from its reliance on Russian nuclear fuel.

Secretary of Energy Jennifer Granholm said the White House is prioritizing development of domestic uranium-enrichment capacity and predicted key legislators will fall in line, so that a fuel-manufacturing plan can be in train by 2025.

“We are going to get Congressional support in a bipartisan way for us to make our own fuel cycle supply chain independent, certainly of Russia,” Granholm, 63, said in an interview at the International Atomic Energy Agency in Vienna. “We’ve got to make this happen for our own independence and national security.”

Russia enriches more than two-fifths of the world’s uranium and still supplies almost a quarter of the fuel used to generate electricity in the US’s 93 operational nuclear reactors. Key congressional Democrats earlier this month balked at a White House request for $1.5 billion in upcoming government funding legislation for a cache of enriched uranium.

The request is part of a broader plan to spend billions to create a US-based industry for uranium enrichment and other services needed to create reactor fuel through the purchase of the raw material from domestic producers.

US officials have weighed sanctioning Russia’s Rosatom over the Kremlin’s invasion of Ukraine. But in the absence of alternatives to the state-controlled fuel giant, power supplies to hundreds of millions of people across globe would be at risk of disruption.

“We need to signal that the US is committed to its own fuel supply as well as the conversion and enrichment components of the supply chain,” Granholm said. “This investment in our own supply chain is a critical piece of that.”

“We would be using the market to make sure this capability gets out,” she said. “We would contract with facilities. The goal is to be independent as soon as possible.”

The US only has one remaining commercial enrichment facility, in New Mexico, which is owned by Urenco Ltd., a British, German and Dutch consortium.

The World Can’t Tackle the Climate Crisis Without New Technologies