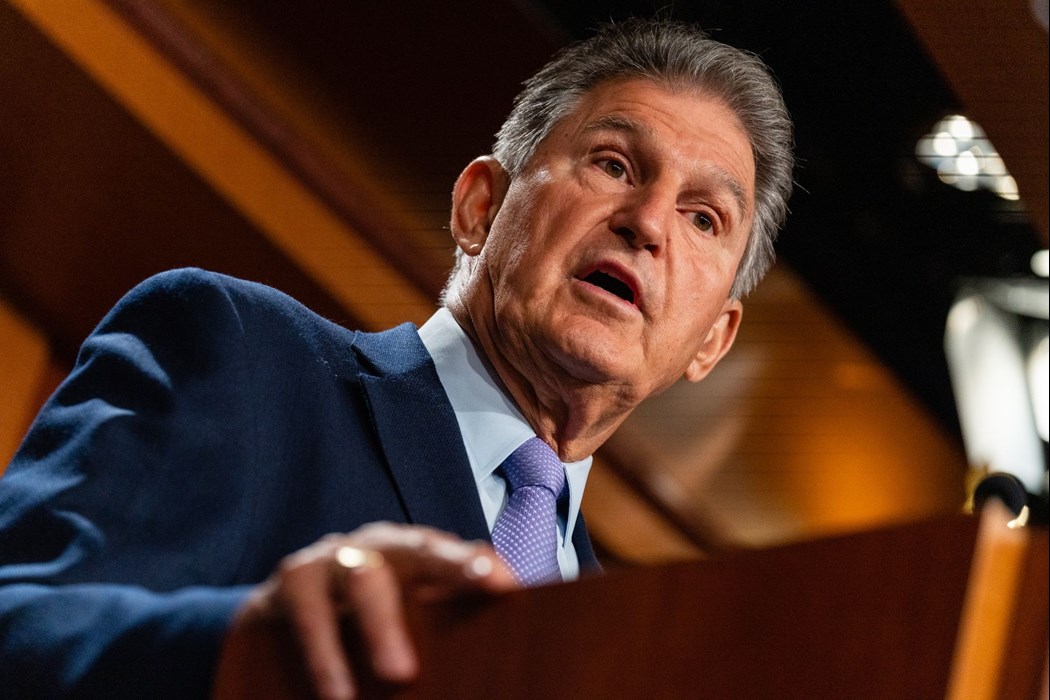 Senator Joe Manchin, a Democrat from West Virginia, speaks during a news conference in Washington, D.C., US, on Tuesday, Sept. 20, 2022. House and Senate leaders are entering a final round of negotiations on a plan to fund the government through the fall and head off a shutdown threat by the end of this month.

(Bloomberg) -- A stalled $6.6 billion natural gas pipeline would get preferential treatment under legislation intended to fast-track energy projects that was made public on Wednesday evening by Senator Joe Manchin of West Virginia.

The measure, expected to be included in a must-pass funding bill to keep the government operating past the end of the month, would speed approval of clean energy and fossil fuel operations, including the Equitrans Midstream Corp. Mountain Valley Pipeline, which crosses Manchin’s home state.

The legislation “requires federal agencies to issue all approval and permits necessary for the construction” of the Equitrans project, according to a summary of the bill.

If passed, the measure would mark a victory for the oil and gas industry and other energy developers that have long sought to accelerate the securing of federal permits and scale back environmental reviews that can lead to years of delay and hundreds of millions of dollars in extra costs.

Yet its path forward is uncertain. The bill faces hostility from Republicans seeking political payback for the pivotal vote by Manchin, a moderate Democrat, on President Joe Biden’s climate and spending legislation that was passed by Congress last month. There’s also opposition from progressive Democrats, who see that same legislation as a bad deal for the climate.

Manchin, who has estimated he might need as many as 20 Republican Senate votes for his permitting bill to counter Democrat defections, said Tuesday that Republican opposition is the result of “revenge politics.”

He said the Senate leadership still plans to attach his bill to government funding legislation, setting up a possible confrontation could force a government shutdown Oct. 1 if it’s not resolved in the next week.

In addition to helping, the Mountain Valley Pipeline, the bill, would also establish new deadlines as short as one year for some federal environmental reviews, set time limits on court challenges and expedite Clean Water Act permits needed for pipelines and other projects, according to the bill summary.

But the changes might not be enough to satisfy Republicans who have argued the effort would fall short without major changes to bedrock environmental law and voiced concern it could add new layers of bureaucracy and deadlines that are unenforceable.

“You gotta put a timeline, because in American we don’t do it,” Manchin said in an interview earlier Wednesday. “It takes us two to three times longer than any nation in the world to get anything done.”

Democratic reaction to the legislation was mixed on Wednesday night. Senator Tom Carper of Delaware, the chairman of the Environment & Public Works Committee, called it “a principled compromise after a lot of discussion.”

But Senator Tim Kaine of Virginia expressed unhappiness with the measure as written. He said that while he was “receptive to many of the permitting reform provisions,” the pipeline extends through 100 miles of his state and he wasn’t given an opportunity to share his constituents’ concerns.

Republican senators, whose votes will be needed to pass the bill, said they would study the text but expressed skepticism.

“We are not sure that the administration is committed to implementing the changes that are needed “ said Senator Mike Rounds of South Dakota.

Senate Minority Leader Mitch McConnell, speaking on the Senate floor Wednesday, said Democrats should support a GOP version of permitting reform introduced by Shelley Moore Capito, also of West Virginia and a Republican, indicating a hardening of positions on the issue.

“As for the Republican side, our colleague Senator Capito has put forward a real, actual, substantive permitting reform bill that would make the commonsense changes our country needs,” McConnell said.

The bill received praise from the American Clean Power Association, which said it would “improve the nation’s outdated system for permitting critical energy infrastructure.”

“Making common-sense reforms to our current permitting process will help us unleash the full potential of the clean energy investments spurred by the Inflation Reduction Act and keep us within striking distance of the emissions reduction targets and climate goals we need to achieve,” said Heather Zichal, chief executive officer of the Washington-based association, which has executives from wind turbine maker TPI Composites Inc. and the utility American Electric Power Co. Inc. on its board of directors.

But Jamal Raad, executive director of the environmental group Evergreen Action, said, “A dirty backroom deal to force through fossil fuel infrastructure has no place in a continuing resolution to fund the government.”

Completion of the stalled 303-mile (487-kilometer) Mountain Valley Pipeline has long been a priority for Manchin. The project, years behind schedule and over budget, stalled after a federal court in January rejected a permit to cross a national forest.

Manchin said last week his bill would direct the court system “to do the job in a timely fashion but rotate around.”

“We’ve had the same three judges from the Fourth Circuit 10 times ruling against,” Manchin said. “All we are asking for is a good shot at this.”

The IEA sees a growing momentum for low-emissions hydrogen