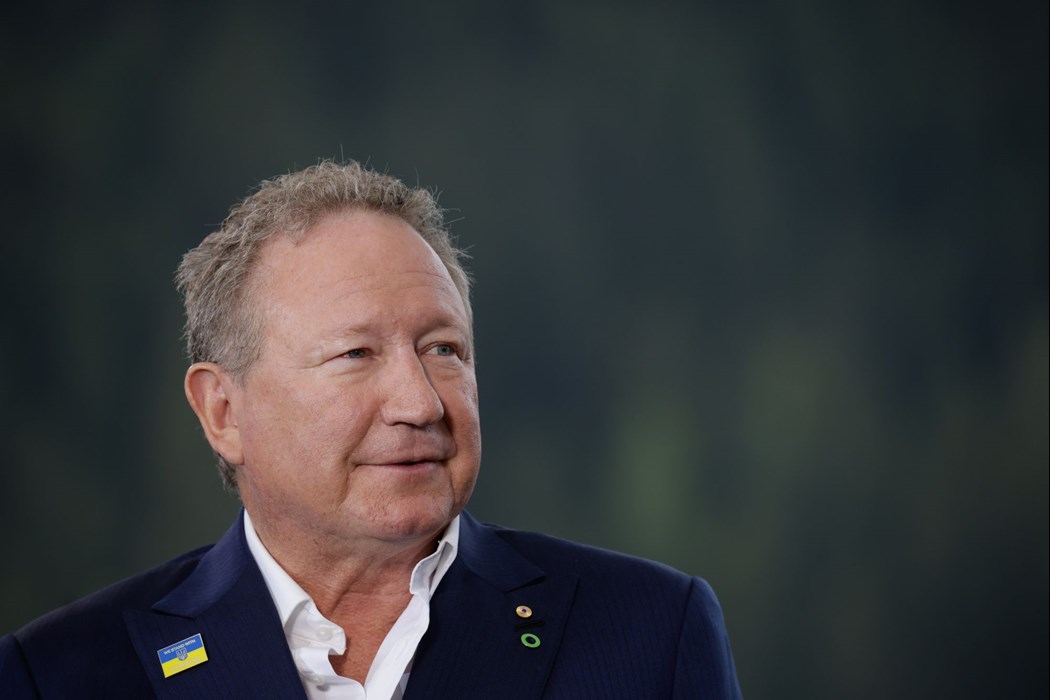 Andrew Forrest, chairman of Fortescue Metals Group Ltd., during a Bloomberg Television interview on the opening day of the World Economic Forum (WEF) in Davos, Switzerland, on Monday, May 23, 2022. The annual Davos gathering of political leaders, top executives and celebrities runs from May 22 to 26.

A plant under construction in Australia to manufacture electrolyzers -- equipment used to create hydrogen -- already won’t be sufficient to keep pace with accelerating interest in supply of zero-emissions fuel, according to Mark Hutchinson, chief executive officer of Fortescue Future Industries.

“We’ll announce over the next few months some big investments in some plants,” he said Friday in an interview in Canberra. The Gladstone, Queensland facility announced last year with an initial annual capacity of two gigawatts is “going to be too small because the demand is going to be enormous.”

Hutchinson, a former General Electric Co. executive, was recruited by Fortescue founder Forrest to helm the clean energy division’s push to become a global exporter of green hydrogen, with a target to produce an initial 15 million tons a year by 2030.

The unit expects to begin output of green hydrogen from 2024 at a small scale in the hundreds of thousands of tons, before quickly ramping up to hit its 2030 goal, he said. Fortescue has announced agreements over future supply deals with companies including Germany-based E.ON SE and JC Bamford Excavators Ltd. in the UK.

“When I think about how big this market is, it’s as big as replacing the entire fossil fuel market in the world, and it’s real now,” Hutchinson said, speaking on the sidelines of a government-hosted jobs and skills summit.

Forrest told investors earlier this week he’d been approached by fund managers over a potential $20 billion separate listing of FFI, though the firm argues there’s better value in retaining the hydrogen developer alongside the world’s No. 4 iron ore exporter.

“Once we get going at scale and just looking at the projects we have, it’s enormous,” according to Hutchinson. Meeting the 2030 output target would create an “energy business way bigger than the iron ore business,” he said.

Analysts have raised questions about Fortescue’s spending on the green unit after the miner last month reported a 40% drop in full-year profit. The company is likely to allocate as much as $700 million to the hydrogen unit this fiscal year, the majority of which will go on operational costs, according to filings.