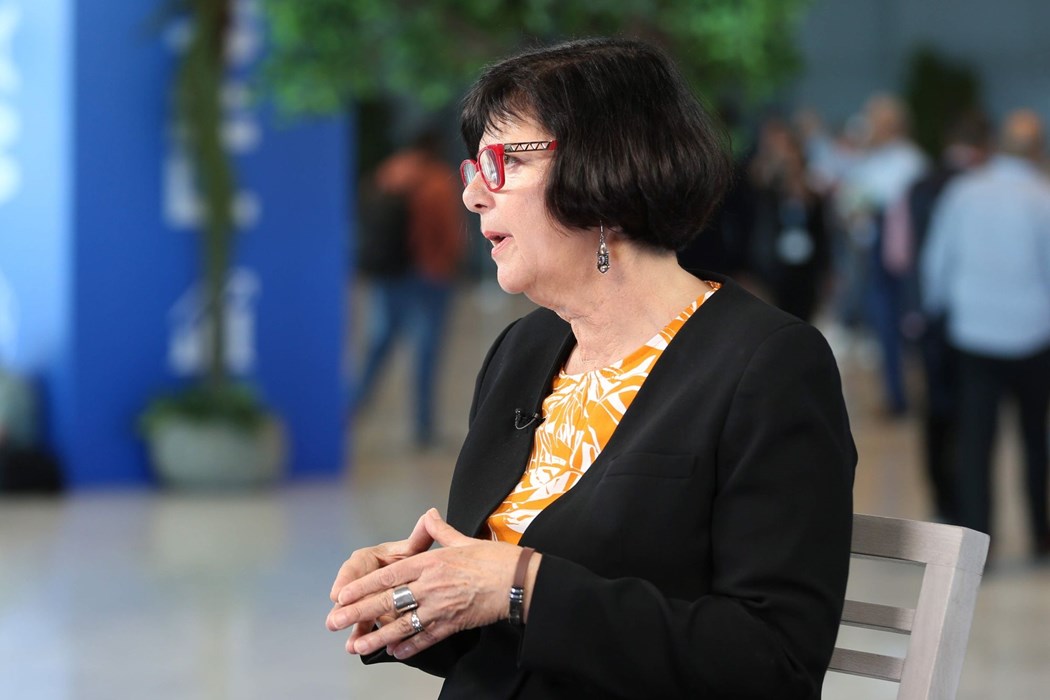 Barbara Creecy, South Africa's environment minister, speaks during a Bloomberg Television interview at the COP27 climate conference at the Sharm El Sheikh International Convention Centre in Sharm El-Sheikh, Egypt, on Wednesday, Nov. 9, 2022. More than 100 world leaders are set to be in Sharm el-Sheikh, Egypt over the next two weeks for the UN’s annual climate talks.

(Bloomberg) -- South Africa, having secured $8.5 billion in climate finance from some of the world’s richest countries, is in talks with additional nations to help it cut reliance on coal, Environment Minister Barbara Creecy said.

The climate finance -- which is being provided by the US, UK, Germany, France and the European Union as part of a Just Energy Transition Partnership -- has been hailed as a prototype for deals to wean other coal-dependent developing nations off the dirtiest fossil fuel. Still, it’s a fraction of the 1.5 trillion rand ($87 billion) the country has estimated it needs for its plan to move away from coal over the next five years.

“We’ve had some bilaterals where there’s been additional interest shown,” Creecy said in an interview at the COP27 climate summit in Egypt, referring to talks with other countries. President Cyril Ramaphosa indicated to the partners “that we are now going to make the circle bigger and other countries that would want to contribute to the JET Investment Plan, we are going to include them as well.”

With more than 80% of its electricity coming from a fleet of mainly dilapidated coal-fired power plants and regular rolling blackouts because the state power utility, Eskom Holdings SOC Ltd., can’t meet demand, the country is in dire need of investment in its electricity sector.

As the world’s 13th-biggest source of climate-warming gases, South Africa is an attractive option for rich nations trying to maximize the impact of their investments in cutting carbon emissions. The age of its power plants means that they will have to close in coming years anyway and the country is amply supplied with sun and wind resources to generate renewable power.

In addition to electricity, South Africa, as part of its coal transition plan, is trying to boost investment in its nascent electric vehicle and green hydrogen industries. Green hydrogen refers to a process where water is split to make the fuel using energy from renewable sources.

The US and Japan on Nov. 15 announced a similar deal for Indonesia at a cost of $20 billion. On Nov. 16 Bloomberg reported that Vietnam may secure as much as $14 billion in a process led by the UK and European Union, citing people who asked not to be named because a public announcement is yet to be made.

Creecy also reiterated the need to reform multilateral development banks, such as the World Bank and International Monetary Fund so that they lend more easily to climate finance projects. She also said they will need to be recapitalized to enable the quantum of spending that will be needed to transition to a lower carbon future.

“You’ve got to actually say what is this transition going to cost,” she said. “If we think that the only source of finance that will be available to all of us is going to be what’s in the climate funds, it’s not going to be enough.”

India Wants Solar Manufacturers to Bid for $2.4 Billion in Aid