Fund managers jump into ESG niche with potential to grow 2,000 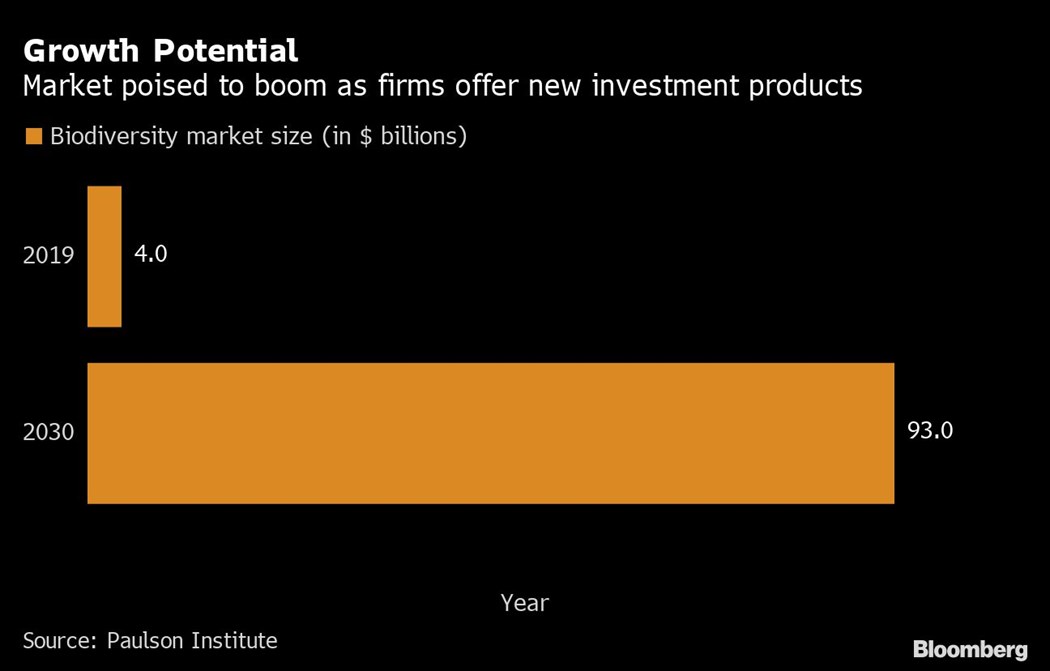 Schroders, Aviva and other UK asset managers seek to profit from demand for biodiversity-focused investment products.

(Bloomberg) -- Some of the UK’s biggest money managers are launching new funds and investment products aimed at generating profits from a long-overlooked corner of green finance: biodiversity.

The decline in biodiversity— the breadth and variety of life and ecosystems on earth, covering polar bears to plankton— poses a growing long-term risk, not only to the planet, but also to the investment industry’s future returns. The World Economic Forum estimates that roughly half of global gross domestic product, or about $44 trillion of economic value, depends on the natural world in some way, meaning its destruction represents an enormous financial loss.

“We don’t believe that markets are properly pricing in the cost and consequences of natural-capital depletion,” said Eugenie Mathieu, a former Greenpeace activist who’s now a senior ESG analyst at Aviva. “We see a significant investment opportunity.”

As asset managers pile into this relatively new business area, climate activists and academics warn of it turning into a simple PR exercise, a distraction from the urgent task at hand.

“This is at best an immaterial distraction, unlikely to have any real impact on biodiversity or nature protection,” said Adrienne Buller, senior research fellow at Common Wealth, a UK-based think tank. “At worst, it contributes to the very real problem of actively creating excuses for regulatory inaction and a lack of public investment on environmental protection and restoration.”

In a report published last year, the World Bank outlined the potentially devastating consequences of inaction from an “unprecedented” decline in biodiversity, with roughly 1 million animal and plant species at risk of extinction. And a recent survey published by Citigroup Inc. found that almost 80% of respondents see an overlap between biodiversity risk and financial risk, and ranked it as a higher priority for environmental, social and governance-minded investors than social issues.

“While dedicated funds could be part of the solution, it’s important that these don’t distract from the urgent need to address the destructive impacts of current business models such as our system of food production,” said Simon Rawson, director of corporate engagement at UK nonprofit ShareAction.

Aviva’s new fund targets both biodiversity “solutions” providers such as Beyond Meat and companies that the managers consider to be leading efforts in their sector to reduce harmful impacts on nature such as chemicals company Koninklijke DSM NV. The fund also holds French insurer Axa SA, Swiss drugmaker Novartis AG and apparel manufacturer Levi Strauss & Co.

“There has been a big shift to see environmental impacts more holistically under the banner of biodiversity or natural capital,” Mathieu said.

“We can’t do our job— invest on behalf of clients to secure their future, their pensions and so on— unless we recognize our dependency on nature and start to value nature in a way we haven’t done thus far,” said Sandra Carlisle, the London-based firm’s head of sustainability.

The Paulson Institute estimates the market for biodiversity investments could reach as much as $93 billion by 2030, up from about $4 billion in 2019. That would follow a similar trajectory of other environmentally labeled products like green bonds, which had sales of more than $500 billion last year, little more than a decade after the first one was issued.

With interest in biodiversity increasing, Schroders is looking to a form of what amounts to carbon offsets plus.

is looking for alternatives  Andy Howard, head of global sustainable investments. The firm is exploring how to measure and market not just the carbon-sequestration potential of individual plots or assets, but their wider ecosystem services too, he said.

next year that will require developers in England to show a 10% improvement to biodiversity for new projects. If they can’t do this onsite, they can purchase tokens from biodiversity-rich projects elsewhere to meet that target.Gresham House is seeing profit potential from buying or leasing land with a view to improving its biodiversity and packaging that as a biodiversity net-gain credit. Climate Asset Management is working on something similar, which targets projects across multiple markets.

Outside the UK, many European asset managers already have natural-capital strategies. The investing unit of BNP Paribas SA started a fund last year to invest in companies that it assesses are helping restore ecosystems. A similar offering introduced in late 2020 by Swiss money manager Lombard Odier Group now has about $750 million of assets, according to data compiled by Bloomberg.

On the disclosures front, there’s still a lack of data and uniform reporting standards. The Task Force on Nature-related Financial Disclosures, announced almost two years ago, plans to finalize a framework in the second half of 2023 for companies to report and act on biodiversity-related risks. Meantime, fund managers are moving ahead with their own solutions, opening the door to possible greenwashing, said Martin Berg, chief investment officer at Climate Asset Management.

“There are lots of new products being presented that say they have improvements to biodiversity,” he said. “This is obviously challenging because the guidance is missing.”

Some of the products being constructed are ripe for abuse, Jupiter’s Carlisle said. The world of carbon offsets has “lots of questions to be addressed,” she said, referring to credit quality and wider governance issues.

“Biodiversity offsetting and biodiversity credits are even more complex,” Carlisle said. “I would like us not to repeat the mistakes we’ve made in other places.”

US Deepens China Solar Tariff Probe With Scrutiny of 8 Firms