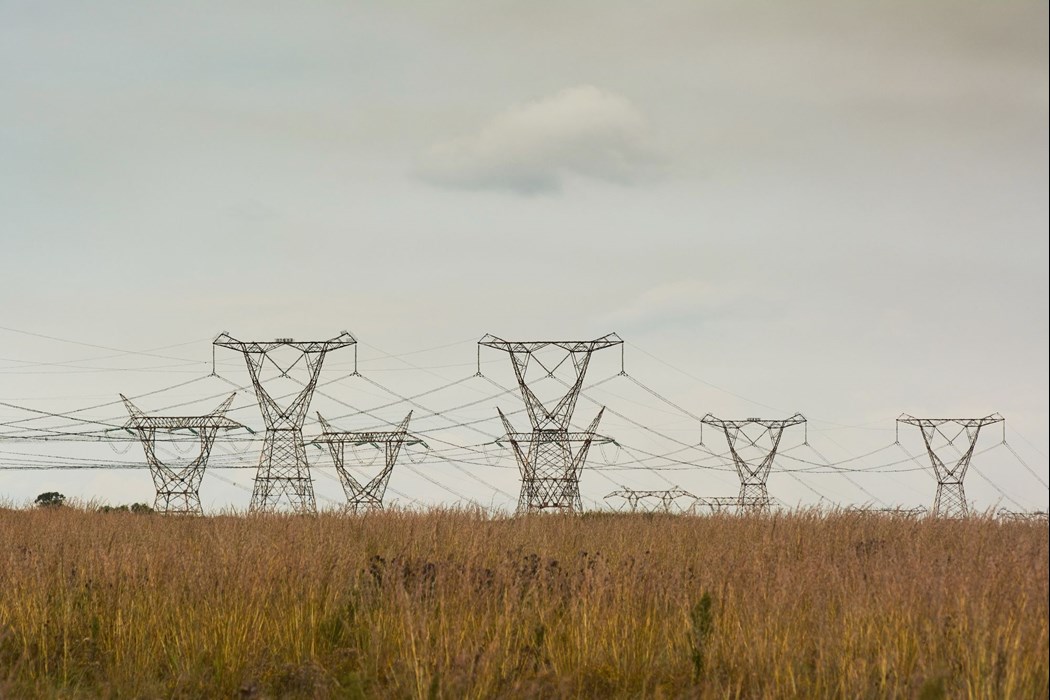 High voltage electricity transmission pylons close to the Eskom Holdings SOC Ltd. Matla coal-fired power station in Mpumalanga, South Africa on Monday, March 21, 2022. A South African court ordered the government to take measures to improve the air quality in a key industrial zone, saying it had breached the constitution by failing to crack down on pollution emitted by power plants operated by Eskom and refineries owned by Sasol Ltd. Photographer: Waldo Swiegers/Bloomberg

(Bloomberg) -- South Africa plans to try and resolve its chronic power shortage by making it easier for private companies to build plants and paying households and businesses to produce electricity from solar panels.

The urgent need to fix the country’s 14-year electricity crisis has been laid bare by five weeks of power outages that ended last week, the worst since the near-collapse of the grid in 2008. President Cyril Ramaphosa and the ruling African National Congress have been heavily criticized over their inability to resolve the problem, despite repeated promises to do so.

We need to “open the floodgates for private investment in new generation capacity,” the presidency said in a presentation to opposition parties on Monday that has been seen by Bloomberg. “Our overriding priority is to add as much new capacity to the grid as possible, as quickly as possible.”

With South Africa’s national power utility, Eskom Holdings SOC Ltd., saddled with 396 billion rand ($24 billion) of debt and unable to meet demand from its fleet of aging and poorly maintained coal-fired plants, the country is turning toward renewables and the private sector for power provision. That’s met an ideological backlash from powerful interests within the ANC that want greater state control of the industry.

Ramaphosa has said he will publicly announce a plan to tackle the crisis in coming days. Calls to his spokesman Vincent Magwenya weren’t immediately answered.

News 24 reported on the presentation earlier.

In addition to seeking power from private sources, the government also wants to resolve some of the issues plaguing Eskom, such as the need to repair broken units, the presidency said. The company can reliably produce about 26,000 megawatts at present, against a winter peak of 32,000 megawatts.

The presidency’s plans would add 7,165 megawatts of capacity within three months, a further 5,663 megawatts in a year and 9,770 megawatts in 18 months, meaning that the amount of available generation capacity could almost double.

Those gains would come from Eskom units returned from outages, demand management, new generation capacity, private investment, power from solar panels on rooftops and the completion of the Medupi and Kusile coal-fired power plants. Beyond 18 months, there is scope to see a further 8,700 megawatts of new generation capacity procured, the presidency said.

The need for investment in transmission and distribution infrastructure and “credible, confidence-boosting measures” is also part of the plan, to “assure South Africans that significant actions are being taken to address the crisis.”

The main points are as follows:

“Cabinet has decided to establish a National Energy Crisis Committee, which will involve all relevant ministers, departments and agencies, with a technical team chaired by the director general in the presidency,” the plan said.