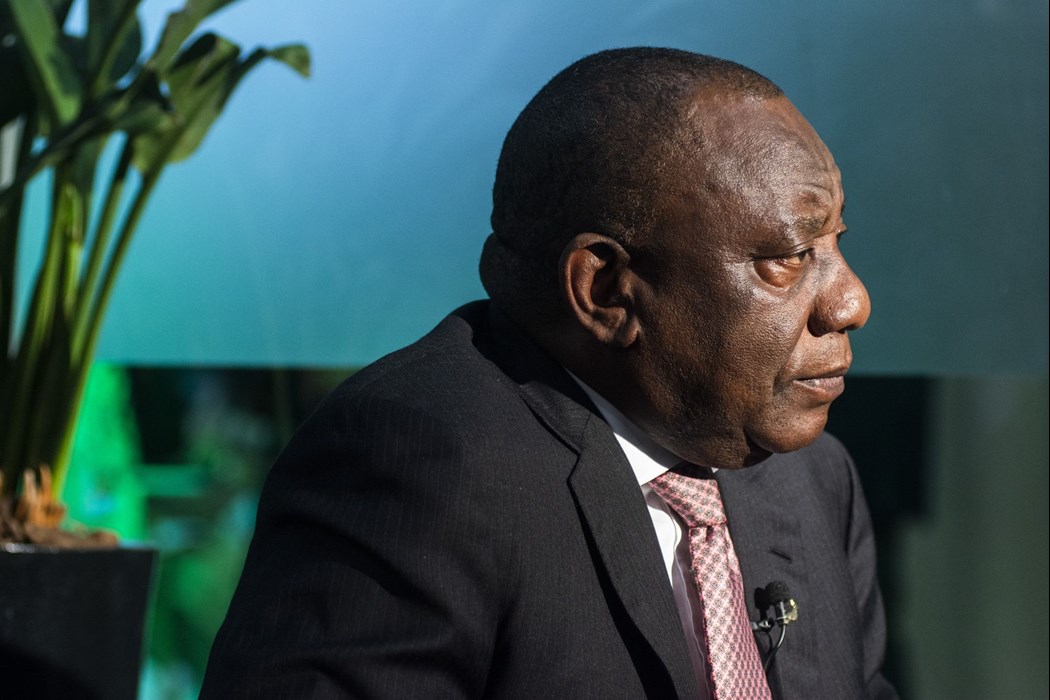 Cyril Ramaphosa, South Africa's president, pauses during a Bloomberg Television interview during the South African Investment Conference in Johannesburg on Wednesday, Nov. 6, 2019. Ramaphosa said his administration is on track to lure $100 billion in new investment within five years, with more than $16 billion already committed and many more projects in the pipeline.

(Bloomberg) -- South African President Cyril Ramaphosa turned to the private sector in a bid to end a 14-year-old power crisis that the government has failed to resolve.

Companies will be allowed to build power plants of any size without a license to meet their own needs and to sell it to the grid, he said. Ramaphosa in a televised address on Monday also announced the doubling of an upcoming power supply tender and said the owners of buildings and houses will be able to sell power from rooftop solar panels to the grid.

Ramaphosa’s announcement comes just as Africa’s most-industrialized nation recovers from the worst power cuts, known locally as load shedding, since the near collapse of the grid in 2008. The pressure on Ramaphosa to end blackouts led to a shift in the ideology of the ruling African National Congress that’s been reluctant to reduce government control over the provision of electricity.

“The shortage of electricity is a huge constraint on our economic growth and job creation,” Ramaphosa said in his speech. “It deters investment, it reduces our economy’s competitiveness. What the most recent load shedding has made clear is that the actions we have taken, and the actions that we continue to take, are not enough.”

The ongoing power crisis has seen Ramaphosa and the ANC come in for stinging criticism for failing to fix a problem they have repeatedly promised to resolve.

The steps are significant. The scrapping of the 100 megawatt limit on plants that needed a license comes just months after that level was raised from a previous 1 megawatt. The move to double renewable energy procurement to 5,200 megawatts under the so-called bid window six tender will accelerate the country’s shift from a dependence on coal for more than 80% of its power toward the use of the nation’s abundant wind and solar resources.

Ramaphosa’s energy plan is well received but it must be implemented expeditiously, Business Unity South Africa said in an emailed statement.

“What is still required is a clear execution plan, set against hard deadlines and accountability for delivery,” BUSA Chief Executive Officer Cas Coovadia said in a statement. “The country and the business sector will benefit from regular and transparent progress reports, so it can track and plan.”

The presidency in a presentation to opposition parties earlier today said that the floodgates need to be open for private investment in new generation capacity.

Other steps announced include:

Eskom’s nearly century-old near monopoly has descended into an indebted, under-performing drag on the economy. The new measures are likely to encourage the development of an unprecedented number of private projects.

In the most recent bout of power cuts, breakdowns at Eskom coal-fired plants and labor strife prompted the utility to cut 6,000 megawatts of supply -- enough to light up 4 million South African homes.

Still, there was no mention by Ramaphosa of the fate of the so-called emergency power tender for 2,000 megawatts last year that has only seen projects totaling 150 megawatts of capacity head toward construction. The rest have been mired in legal cases, environmental issues and an inability to reach financial close.

He also didn’t mention the conflict over power policy within his own government.

Gwede Mantashe, his energy minister and a former coal union leader, has also dragged his feet in authorizing more renewable energy, has punted additional coal and nuclear energy and expressed skepticism about the offer of $8.5 billion in climate finance from some of the world’s richest nations.

The latest measures, if implemented will help South Africa start the journey toward energy independence.

“If the president does everything he says he will I think everything will be great,” David Lipschitz, a renewable power expert, said in an interview with South African broadcaster eNCA.