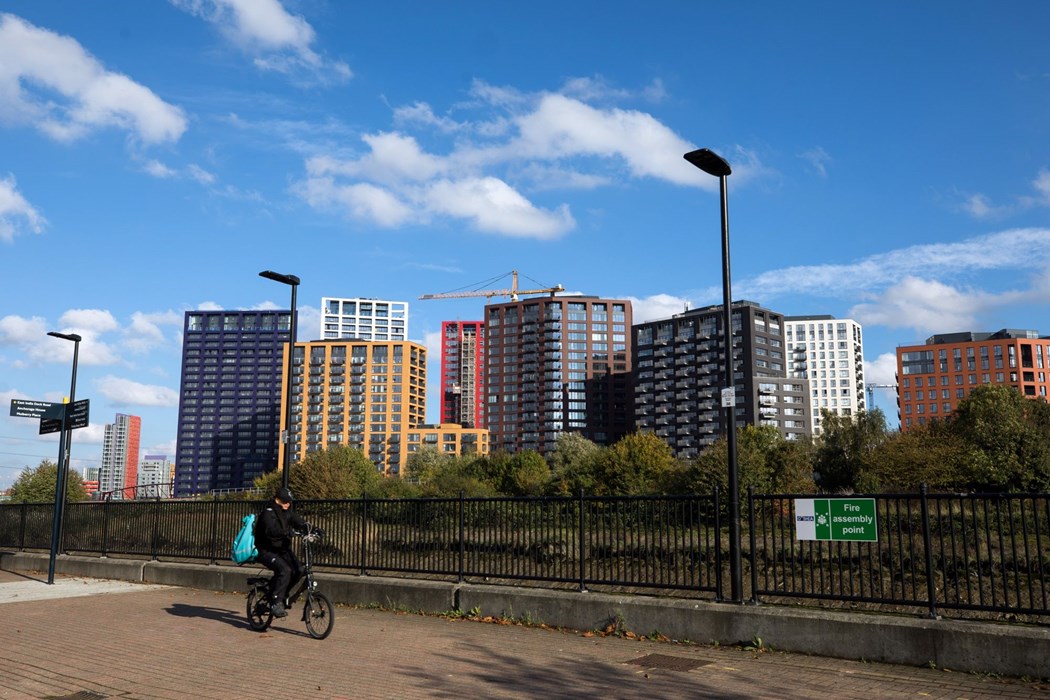 As British households brace for a 50% hike in energy bills from April, more than half a million consumers have been exposed to the full force of Europe’s energy crisis and face much steeper increases.

(Bloomberg) -- As British households brace for a 50% hike in energy bills from April, more than half a million consumers have been exposed to the full force of Europe’s energy crisis and face much steeper increases.

Eduardo Picoli, a resident of London City Island -- an affluent neighborhood of the U.K. capital -- was told in December to expect a roughly 380% jump in his apartment’s heating bill. Natalia Rabicka, who also lives in the modern riverside suburb near the Canary Wharf financial district, was warned of a similar increase.

“I almost fell from my chair,” said Picoli, who runs a residential letting business. “We must have the heating on in winter otherwise the kids’ room and living room are very cold.”

Like many new apartments across the U.K., the ones developed by Ballymore on London City Island are heated by a single central system. Because the gas is paid for by a building manager, the contract is a commercial one. When that expired in December, residents weren’t protected by the cap that allows regulator Ofgem to limit price increases for most households.

“The problem is that it’s an unregulated market,” said Andrew Wood, a district councilor for Tower Hamlets, which includes London City Island. “You’ve got these captive consumers, people in these new apartment buildings, who have no control over quite important parts of their bills.”

Common in Scandinavian countries, integrated systems are being pushed as a way to make buildings greener, enabling the use of more renewable sources like waste heat from factories. The national Climate Change Committee estimates that about 18% of the country’s heating should come from such networks by 2050 to hit U.K. decarbonization targets in a cost-effective way.

Ballymore tenants, including Picoli and Rabicka, were granted some relief when wholesale gas prices, the main contributor to their heating rate, dropped sharply at the end of December. That means their total bills jumped by only about 230% this quarter.

A Ballymore spokesperson said the firm empathizes with residents and is working closely with brokers to maximize cost efficiencies and keep bills down.

Communal Energy Partners, the brokerage that secures supply for Ballymore apartments in London City Island, is buying gas in three-month periods in the hope prices will ease further. Residents of apartments elsewhere, with brokers which have locked in for a year, will be facing even bigger increases, said Chief Executive Officer Mark Thomas.

“Customers aren’t protected from the normal supply and demand issues affecting the market,” Thomas said in an interview. “There needs to be some type of cap.”

As many as 800,000 people in the U.K. live in apartments with so-called heat networks, according to consumer body Heat Trust, and aren’t regulated by Ofgem. Not all of them are in wealthy neighborhoods, with many including residents in social housing. Bringing those people under Ofgem’s price cap would represent another hit for household suppliers, 25 of which have collapsed during the market turmoil.

“Protecting consumers is our top priority and we are aware of a suggestion to expand the price cap to include communal supply,” an Ofgem spokesperson said in a statement. Any changes would need to be considered carefully in terms of the wider “impacts on the retail market.”

While commercial energy contracts have offered tenants relatively low prices in the past, the current crisis is highlighting the risks.

“If people are in a less favorable situation, it might be very difficult for them to pay,” said Rabicka, on London City Island. “It’s a little bit outrageous.”