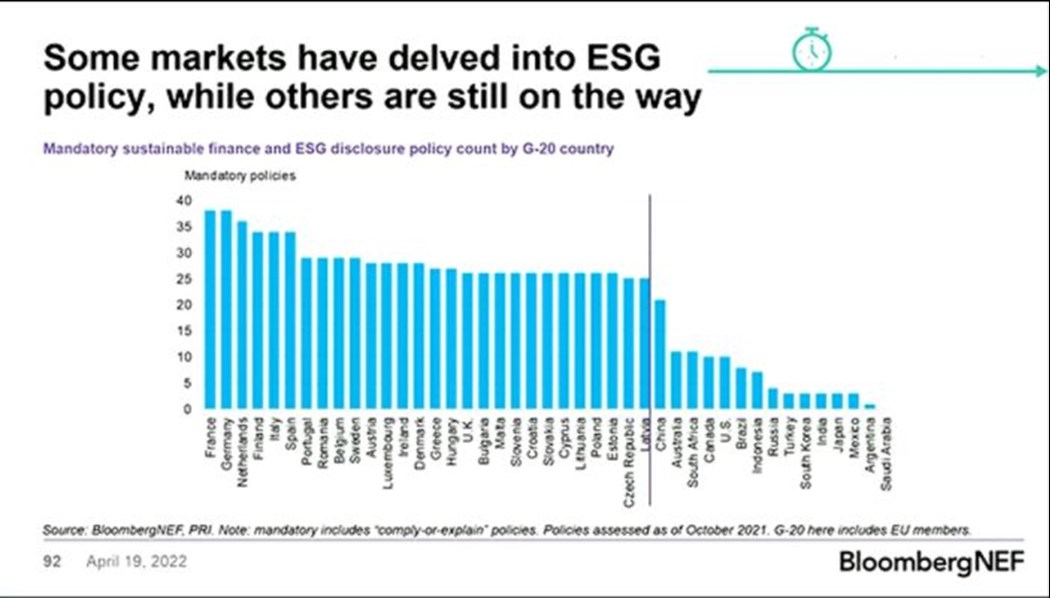 Energy executives, government officials and financiers are converging in New York on Tuesday and Wednesday for the BNEF Summit, one of the premier conferences focused on the energy transition.

(Bloomberg) -- Energy executives, government officials and financiers are converging in New York on Tuesday and Wednesday for the BNEF Summit, one of the premier conferences focused on the energy transition.

The event is happening as Russia’s war in Ukraine disrupts global energy markets and raises critical questions about how the industry will respond. While some are seeking to return to the prewar status quo that’s dominated by fossil fuels, many people see the turmoil as an opportunity to accelerate the shift to clean energy.

Oil and gas products should have carbon footprint scores similar to the calorie counts you see next to meal choices at a fast-food chain, said Chevron’s Bruce Niemeyer.

“It affects your choices,” Niemeyer said. “As the world moves to a lower carbon future, it’ll prefer to consume oil and gas that comes from carbon efficient producers.”

Chevron supports an industrywide plan to measure the carbon footprints of oil and gas products so consumers have the ability to make choices based on lower emissions due to better methane management or other measures. The oil major is currently in talks with industry groups about the idea, which would need third-party verification to be effective, Niemeyer said.

Guyana to Decide on National Oil Company by September (12:56 p.m.)

Guyana will decide on whether or not to create a national oil company within the next six months as the government deliberates the licensing process.

All of the 10 billion barrels of oil discovered in Guyana since 2015 have been in the Stabroek Block, operated by Exxon Mobil Corp. and co-owned by Hess Corp. and China’s CNOOC. Guyana is concerned about the “concentration” of the oil majors in its economy and wants to make sure new licenses are allocated on more favorable terms to the government, Vice President Bharrat Jagdeo said.

If Guyana decides to set up a national oil company, it would seek a “strategic investor” to partner with, and the government would largely take a “passive role,” Jagdeo said.

Exxon’s existing license will not be renegotiated even though it was signed on terms highly favorable to the oil giant, he said. “We believe that the future blocks, we can correct this inequity, this imbalance in future blocks.”

The U.S. and more broadly North America have been laggards when it comes to putting sustainable finance and ESG policies in place, said BNEF analyst Mallory Rutigliano said. Still, she said “it is very much not too late” to put together policies that are ambitious and robust and align with other global players that moved earlier.

Rutigliano compared sustainable finance efforts by countries to guests attending a dinner party -- some are early, some bear gifts, some bring good conversation to the table and others make up for other failures by helping with cleanup.

The good dinner guests are European countries, with France and Germany leading when it comes to mandatory disclosure policies, she said. The U.S., China, Russia and Saudi Arabia are among the G-20 countries at the opposite end of the spectrum, with weak or no disclosure policies.

The U.S. is an example of a country that hasn’t put in place policies yet, but can bring something to the table as the source of the most green bonds in the world, led by corporations to municipalities, she said.

Ultimately, Rutigliano said the message to countries that are late to the game is “you can still redeem yourself.”

Booming cash flows stemming from higher crude prices and capital discipline are leaving U.S. shale producers in a much better position to tap the nation’s oil reserves, according to Anastacia Davies, head of oil supply and U.S. oil at BloombergNEF.

New supplies from the U.S. will be likely needed to help fill up a potential supply gap left by Russia and to meet global energy demand for the decades to come, Davies said during a presentation.

“We do think the days of unchecked U.S. growth are likely behind us, but that doesn’t mean the shale’s role is gone,” Davies said. “There’s maybe a ‘new new normal’ yet to come.”

White House Is in Talks to Boost Energy Security in Spending Bill (11:18 a.m.)

The White House is in talks with members of Congress about a reconciliation spending package that would increase energy security as well as tackle consumers costs, said Ali Zaidi, the administration’s deputy national climate advisor.

“We are having conversations with members on the Hill, a number of them, about a reconciliation package that will help us tackle consumer costs and boost energy security,” Zaidi said. “We are having, I think, good dialogue on this topic.”

Senator Joe Manchin of West Virginia has said he is interested in restarting negotiations on a slimmed-down version of the stalled Build Back Better Act that would focus on climate change, prescription drug prices, and deficit reduction. A key element of the original proposal was $550 billion in energy and climate spending, including more than $300 billion in new and expanded tax credits for wind and solar power, nuclear plants, biofuels and advanced energy manufacturing.

Zaidi also said there’s some “appropriate short-term anxiety” on solar development in the face of potential additional tariffs on imports, though people are still “pretty bullish” about the direction the U.S. is going.

“There’s good reason for that because we know how to take that stuff on,” he said.

The energy industry has brought tremendous technological advances over the past 50 years, said Keo Lukefahr, head of energy derivatives and renewables trading at Motiva Enterprises LLC.

“Let’s stop villainizing the fossil fuel industry,” she said. We have to move to low-carbon generation but fossil fuels are part of that transition, she said.

Europe’s immediate push away from Russian natural gas amid the war in Ukraine and a long-term desire to limit gas overall is a “loud and powerful signal to economies around the world,” said Justin Guay, director of global climate strategy for the Sunrise Project.

He questioned the long-term value of rushing to build LNG terminals to help the European Union shift away from Russian gas.

“It takes three to five years to build a new LNG terminal” he said. “Europe needs a new gas supply by the end of the year”.

The crisis will moderately increase the energy transition, added Betrand Millot of Caisse de Depot et Placement du Quebec. While higher oil and gas prices amid the crisis magnifies energy-security concerns, he said, there are constraints in supply chains, including for electric vehicles that make that acceleration a moderate one.

Companies used to “air gap” their industrial operations to protect them from cyberattacks. Those operations are increasingly connected via networks and so the focus needs to shift from preventing attacks to building resilience and the ability to withstand attacks.

A Chevron Corp. vice president said the company intends to be a leader in the energy transition by investing in new lower-carbon solutions.

“Energy companies of the world need to be at the table,” said Bruce Niemeyer, vice president of strategy and sustainability at Chevron. “We believe the future of energy is lower carbon.”

The challenge is unprecedented: energy demand and populations are growing, but the world is attempting to reduce emissions, Niemeyer said. Because the challenge is bigger than any one country, one industry or one company can solve, there’s a need to collaborate.

The war in Ukraine has focused a spotlight on the world’s reliance on fossil fuels, said Jon Moore, CEO of BloombergNEF, as he opened the two-day event. The conflict is also pointing to ways to get away from traditional sources of energy.

“When everything is in chaos, it’s good to think about the job to be done,” Moore said.

The planet has already warmed by 1 degree Celsius (1.8 degrees Fahrenheit) he said, getting closer to the 1.5 degree limit that most scientists agree is the upper limit to avoid the most catastrophic impact of climate change. And focusing only on cost, using just the lowest-cost sources of power generation, would put the world on track to warm by a disastrous 3.3 degrees.

“That is not the job to be done,” Moore said.

Earlier Tuesday, National Grid Plc said it plans to eliminate fossil fuel from its gas networks in Massachusetts and New York by relying instead on green hydrogen and so-called renewable gas produced from landfills, farm waste and other sources.

Other utilities including Southern Co. and Southern California Gas Co. have discussed using this approach to limit carbon emissions, though there are questions about cost and availability of both fuels.

“Just as we are investing in renewables like wind and solar to decarbonize the energy running through our electric network, we are committing to decarbonize our gas network,” National Grid CEO John Pettigrew said in a statement.