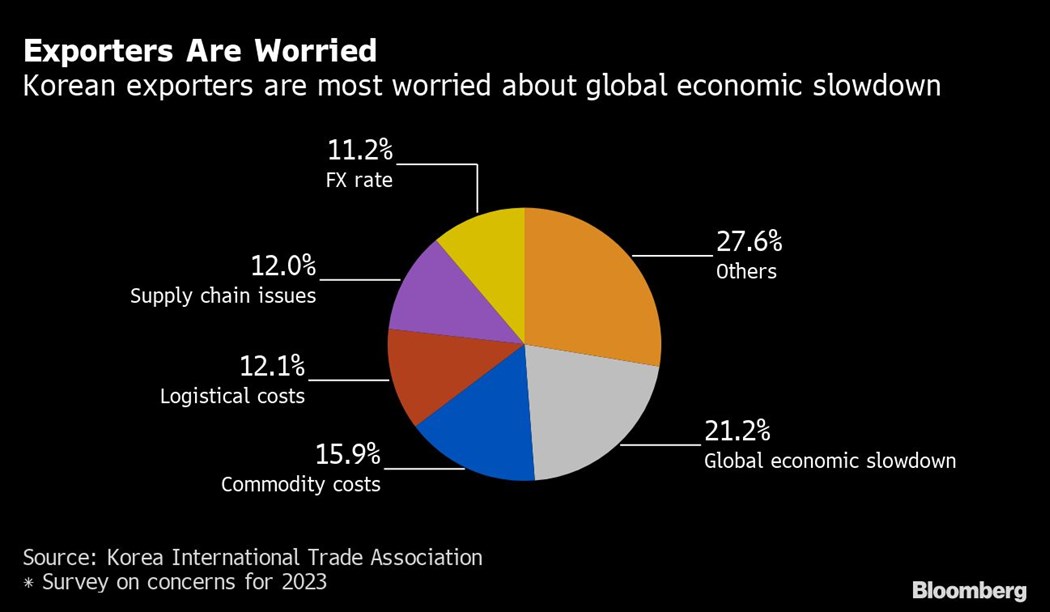 (Bloomberg) -- South Korea’s early trade data showed a decline in exports persisting this month in the latest sign of a global economic slowdown.

Average shipments that exclude working-day differences decreased 8.8% in the first 20 days of January from a year earlier, the customs office said. That follows a 9.6% decline for the full month of December. Headline exports fell 2.7% through Jan. 1 to 20.

Weakening exports are among the biggest headwinds to Korea’s economy this year. The decrease in overseas shipments began in late 2022 as the world economy slowed under the combined pressure of Russia’s war on Ukraine, Covid troubles in China and global central bank tightening.

Waning semiconductor demand is at the heart of the decline in Korea and analysts surveyed by Bloomberg expect the country’s economy to have probably contracted last quarter, partly due to falling exports.

Trade performance has far-reaching implications for Korea as the economy relies heavily on global commerce to drive growth. Bank of Korea Governor Rhee Chang-yong said on Wednesday that declining exports were among his three biggest concerns for the year, along with renewed oil-price strength and a property slump.

The outlook remains uncertain. While the BOK expects a recovery in exports in the second half of the year, Trade Minister Ahn Duk-geun told reporters earlier this week that it’s still hard to estimate how long the decline will last.

Korea’s exports will probably be 4% lower this year than in 2022, while imports will decline 8%, according to a Korea International Trade Association forecast.

The Global Economy Needs a New Powerhouse. India Is Stepping Up