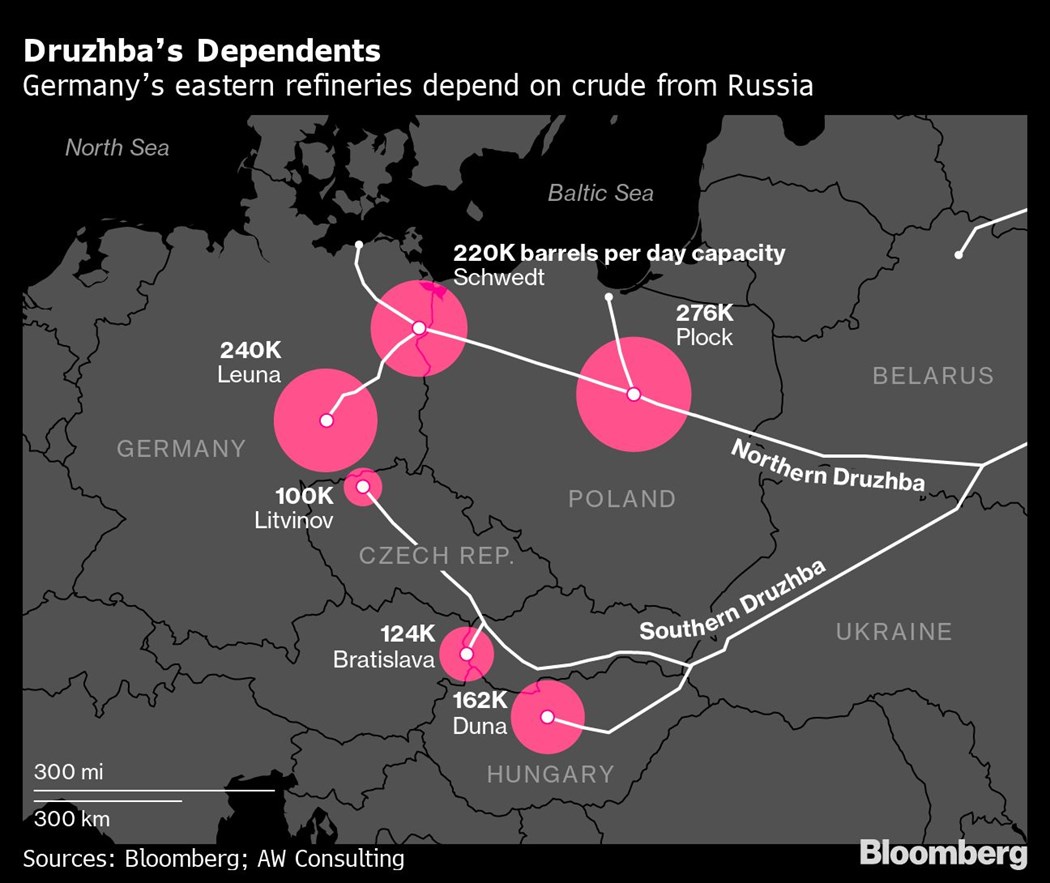 (Bloomberg) -- Oil flows on the Druzhba pipeline from Russia to Eastern Europe have begun to resume following repairs on electrical infrastructure damaged in Russia’s latest attacks on Ukraine, according to Hungary’s foreign minister.

Meanwhile, natural gas and power prices eased as NATO and Poland’s leaders said there is no indication that a missile strike on Polish territory was an intentional Russian attack.

The military alliance said the explosion on Polish territory was likely caused by Ukrainian air defenses. Traders remain on alert to any sign of the war’s escalation as well as risks to European energy infrastructure.

Oil prices declined, after rising earlier amid a report of an attack on a tanker off the coast of Oman. Mild weather, full storage levels and new details emerging on the EU efforts to limit price volatility are keeping gas futures in check.

(All times are London.)

European buyers may have to accept 15-year LNG supply deals -- triple the preferred length -- if they want to lock in supplies from proposed US export facilities, according to McKinsey & Co.

There’s enough North American gas to meet both domestic and export demand for at least the next 30 years, with most production at a fraction of European gas prices, but developers of such plants need long-term deals to secure financing, the consultancy said in a report on Wednesday.

Oil flows on the Druzhba pipeline carrying Russian crude to eastern Europe have resumed after technical repairs in Ukraine to restore power to the link, Hungarian Foreign Minister Peter Szijjarto said. Flows will be slower than normal for an initial period.

Poland is asking to receive crude oil from Russia next year despite its pledge to stop doing so by the end of 2022, according to Transneft PJSC.

“There are requests from consumers in Poland” for oil flows for 2023 via the Druzhba pipeline through Belarus, Sergey Andronov, vice president at Transneft, Russia’s oil-pipeline operator, told Bloomberg on Wednesday.

Polish oil refiner PKN Orlen SA confirmed the measure in a statement, but said it was “only to book potential transit capacity” on the pipeline.

The Czech state-owned pipeline operator Mero says the country is receiving Russian oil via the Druzhba pipeline from storages in neighboring Slovakia, according to a statement.

Berlin will set aside €665 million ($693 million) to rent and operate floating storage and regasification units, or FSRUs, needed to import liquefied natural gas, according to a document released by parliament.

It will be an annual expense, paid until 2038.. The money will be used to pay contractors and fund infrastructure development in Stade, Brunsbuettel and Lubmin -- where LNG terminals are planned.

Petronas confirms that “a fire incident” occurred at the Sabah-Sarawak gas pipeline near Lawas, Malaysia, earlier on Wednesday, according to a company statement.

“The incident is believed to have involved a third-party contractor” performing works nearby, unrelated to the pipeline’s operations, it said. The firm’s emergency team has been mobilized to the area.

There are no reports of injuries or pollution resulting from the attack of an oil tanker off the coast of Oman on Tuesday night, according to a statement from Eastern Pacific Shipping, which owns the vessel.

The Pacific Zircon, carrying diesel, was hit by a “projectile” roughly 150 miles from the Omani coast at about 7:30 p.m. local time, the company confirmed.

“All crew are safe and accounted for. There is some minor damage to the vessel’s hull but no spillage of cargo or water ingress,” it said.

Repsol SA is trying to increase diesel output from its refineries in Europe by removing bottlenecks at the plants, according to Chief Executive Officer Josu Jon Imaz. Even so, the region has little choice but to learn to cope with high prices for the fuel this winter, he said at a conference in London.

Diesel markets fell into supply deficit after a number of refineries halted during the Covid-19 pandemic, a situation that will be exacerbated when a European Union ban on Russian fuel imports comes into effect in February. The International Energy Agency warned on Wednesday of the “increasingly ominous outlook” that will force consumers to curtail their diesel demand.

“We expect this matter to be fixed, and the oil flow to be resumed within hours or days. Slovakia has sufficient resources reserves and is not endangered,” he said at a press conference in Bratislava.

The Liberian-flagged oil tanker Pacific Zircon was hit by a drone off the coast of Oman, The Associated Press reported, citing an unidentified defense official.

The vessel is operated by Singapore-based Eastern Pacific Shipping, which is a company ultimately owned by Israeli billionaire Idan Ofer, according to the AP report.

The pipeline itself didn’t appear to be damaged following a barrage of missile attacks against Ukraine’s energy infrastructure on Tuesday, but rather an electricity transformation station which is “easier to repair,” he said in a Facebook video.

Transneft, Russia’s oil-pipeline operator, said that Ukraine had informed the company that flows Druzhba won’t restart Wednesday, according to its spokesman Igor Dyomin.

Temperatures are expected to drop below seasonal norms this weekend, forecaster Maxar said in a report. Unseasonably mild weather has helped to keep heating demand low in recent weeks.

Europe’s residential and commercial gas demand reduction has been gaining traction and is likely to continue into this winter and beyond, according to a report by BloombergNEF.

Gas demand in northwest Europe, Italy, and Austria has been 30% lower than the five-year average over 2016-2020 from Oct. 1 to Nov. 13, the it said. Although unseasonably mild weather has contributed to keeping heating demand low, BNEF estimates that approximately two-thirds of the reduction are due to changes in consumer behavior driven by increased prices.

The EU set out its proposals for a cap on prices ahead of a meeting of energy ministers next week. The ceiling would be activated if the TTF-Price basis reaches a pre-defined level and orders above that wouldn’t be executed, according to a document shared with member states on Tuesday.

US President Joe Biden and key European leaders urged caution after a rocket struck a Polish village just over the border from Ukraine. Biden said the trajectory of the missile means it may not have come from Russia.

Tensions are already particularly high after Moscow fired a missile barrage at Ukrainian infrastructure, causing energy outages across the country.

A key pipeline bringing Russian oil to eastern Europe was halted on Tuesday after its power supply was knocked out, according to Hungarian energy company MOL.

MOL said a power station serving the pipeline in Ukraine was hit by Russian artillery, citing the Ukrainian pipeline manager. It’s not clear how long the pipeline will be out of action.