Upstream industry to balance energy security and transition in 2023

Rystad Energy's Vice President Radhika Bansal looks at the key takeaways from 2022 and what are the key trends to watch out for in 2023. 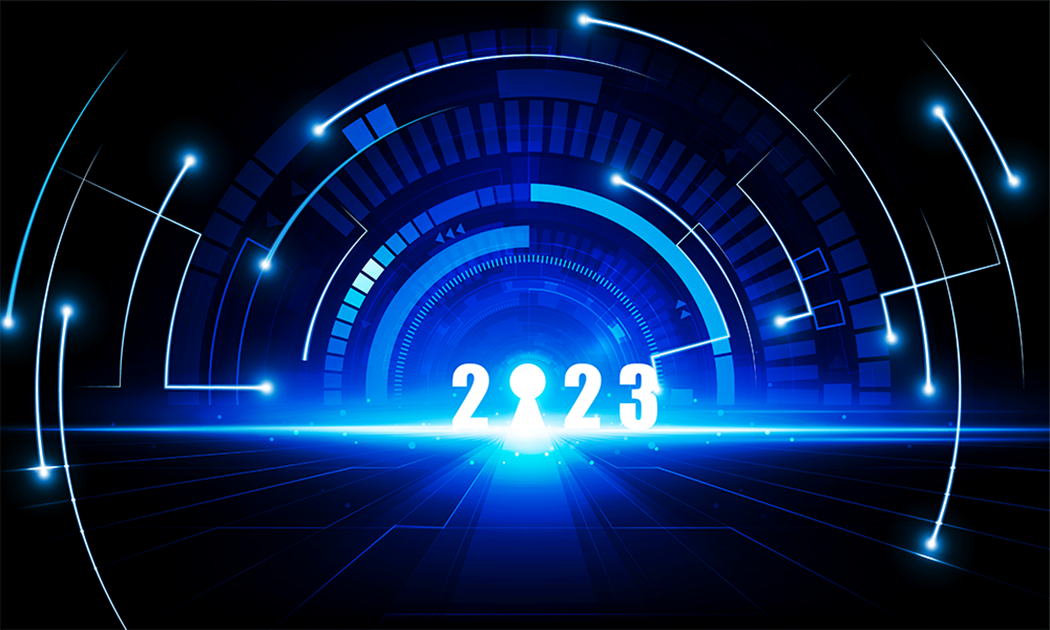 While the oil and gas industry has mostly always been volatile given a multitude of factors impacting supply and demand, last year was unique, with the industry posting bumper profits and record high free cash flows primarily as a result of high oil and gas prices following Russia’s invasion of Ukraine in February 2022, as well as continued capital discipline. Revenues of public exploration and production (E&P) companies consequently increased almost 55%, reaching $2.4 trillion in 2022. This is about 40% higher than the previous record from 2013. This is not, however, as impressive as the growth in profit, defined as revenue minus all operational costs, cash to governments, and investments. Combined profit in 2022 for public oil and gas companies reached almost $800 billion, 76% higher than in 2021, which was the previous record year in terms of profit.

However, most of this cash was returned to shareholders through dividends and share buybacks with the investment ratio - defined as total investments divided by cash from operations - dropping to record low levels. Historically this ratio has been in the range of 50% to 70%, but in 2021, it dropped to 37% – one of the lowest values ever seen. In 2022, the ratio fell to an all-time low of about 27%. 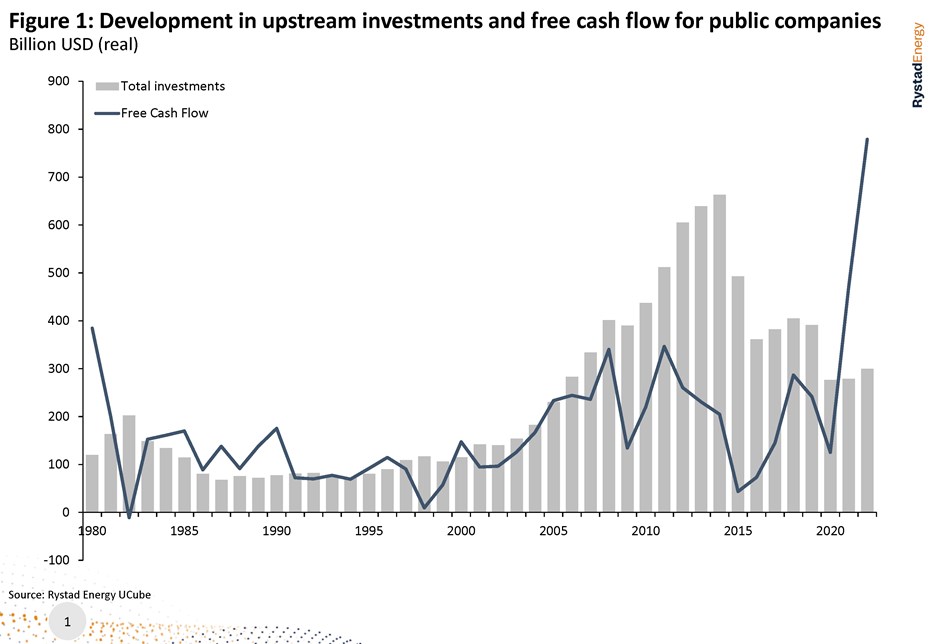 The modest growth in investments and low sanctioning activity in 2022 shows that oil and gas companies remained cautious and prioritized shareholder returns, along with deleveraging their balance sheets. While sanctioning activity doubled in 2021, with around $130 billion in greenfield investments estimated to have been approved, it dropped by 15% last year and was considerably lower than 2019. LNG expansion projects in the US, and the $22 billion Zuluf field expansion in Saudi Arabia were key contributors to the 2022 greenfield investments. The two countries were also the ones to deliver the largest oil production growth last year, with Saudi Arabia growing around 1.6 million bpd (barrels per day) as it rolled back volumes after production cuts and the US growing close to 1.5 million bpd attributable to increasing tight oil activity.

Although the growth in US production was relatively muted in the first half of 2022 due to bottlenecks within the service industry, the time lag between completions and start-up of new wells and some additional choking of new wells, it started to rise in the second half of the year with the easing of those constraints. Rystad Energy estimates that the US delivered almost 12.8 million bpd of crude and condensate volumes in 2022, with the bulk of it explained by the structural strength of activity in the Permian Basin that we have been reporting on throughout the year. 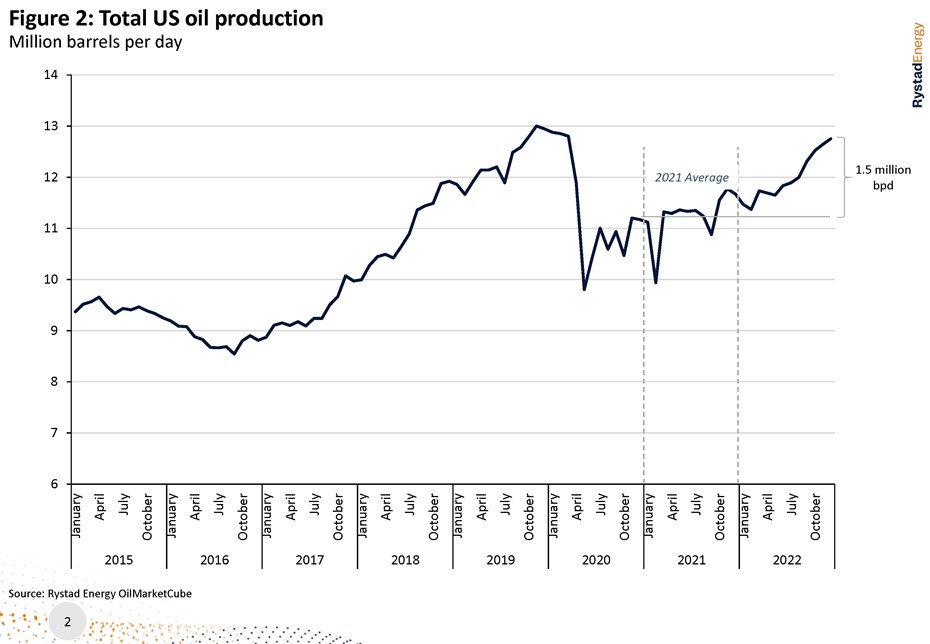 As the industry continues to balance energy security and the transition, M&A activity remains an interesting narrative and last year was no different. Though the majors continued to divest their mature, non-core, and high carbon assets driven by their respective portfolio rationalization and emissions reduction strategies, there were buyers keen to acquire resources primarily in the Middle East and North America. When looking at the top 10 companies that acquired the most net resources in 2022, Shell, TotalEnergies, and ConocoPhillips are amongst the top 5 with their deal to farm-into the low-cost and low-carbon North Field Expansion project in Qatar as the primary contributor, while others focused mainly on the US Lower 48 resources. 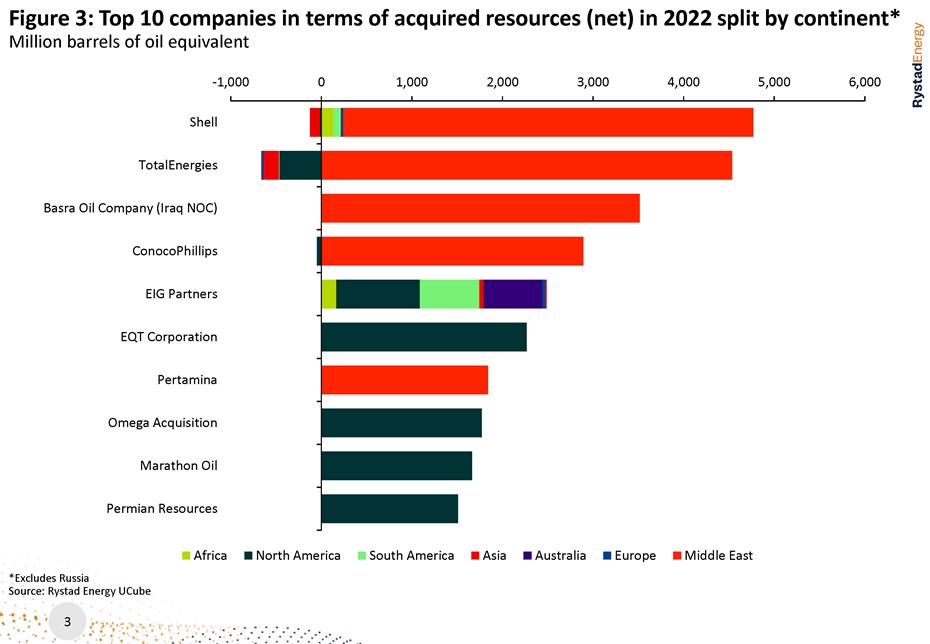 The industry is entering 2023 with extremely resilient balance sheets and financial strength. With the Russia-Ukraine war bringing energy security back into focus, the stage is set for an interesting year ahead as oil and gas companies evaluate strategies to invest in ramping up more near-term supply while progressing on their decarbonization goals. However, with unresolved volatility and uncertainty, Rystad Energy believes that demand side risks will define the 2023 trajectory.

Bullish Signals for 2023 Oil Prices: After surging to $139 per barrel, a level not seen since 2008, Brent prices plunged in the second half of 2022 on the backdrop of China demand uncertainty and tighter monetary policy despite the physical fundamentals being tight. In our view, oil prices will swing back as the re-opening of mainland China and the relatively low inventories support prices. However, considerable downside risks remain, and we expect that the worst of the recessionary impacts will be shouldered in the first half of 2023.

We model different scenarios around Russia, the US, and OPEC+ production, along with global oil demand to arrive at our bear, base, and bull cases for 2023. In our bull case, we could see prices jumping toward $175 per barrel, a level that would likely induce a swift recession and demand destruction. In our bear case, we would see prices dipping to $70 per barrel, accelerating an intervention by OPEC+.

Gas Prices expected to remain elevated in 2023: We have revised down our 2023 price forecast for the TTF (Europe) to $38 per MMBtu due to improvement in market balances and recovering storage levels. Europe is set to manage with current storage through this winter but will see challenges next year as Russian pipeline exports continue to be limited to current flows via the TurkStream pipeline and Ukraine, with the latter facing a downside risk in flows. Prices will have to stay elevated in 2023 to curb industrial gas demand and attract cargoes from Asia. We have revised down our forecast for Asian spot LNG to $32.3 per MMBtu for 2023, which is still trading at a significant discount to the TTF.

FID activity expected to reach pre-Covid-19 levels: FID (final investment decision) activity was strong in 2019, with the approved conventional greenfield capex amounting to $190 billion, with an expectation of a continued increase in activity in February 2020.  However, with the collapse in oil prices, FID activity dropped significantly, with only $62 billion worth of greenfield capex being green-lighted. Sanctioning activity doubled in 2021 from a relatively low base and is expected to reach pre-Covid-19 levels this year. Rystad Energy estimates more than $200 billion of greenfield investments to be approved in 2023. The growth will mainly be driven by LNG projects in the US, Mexico, and Qatar, the major sour gas Hail & Ghasha development in the UAE, and some other major field developments in Norway and Brazil. 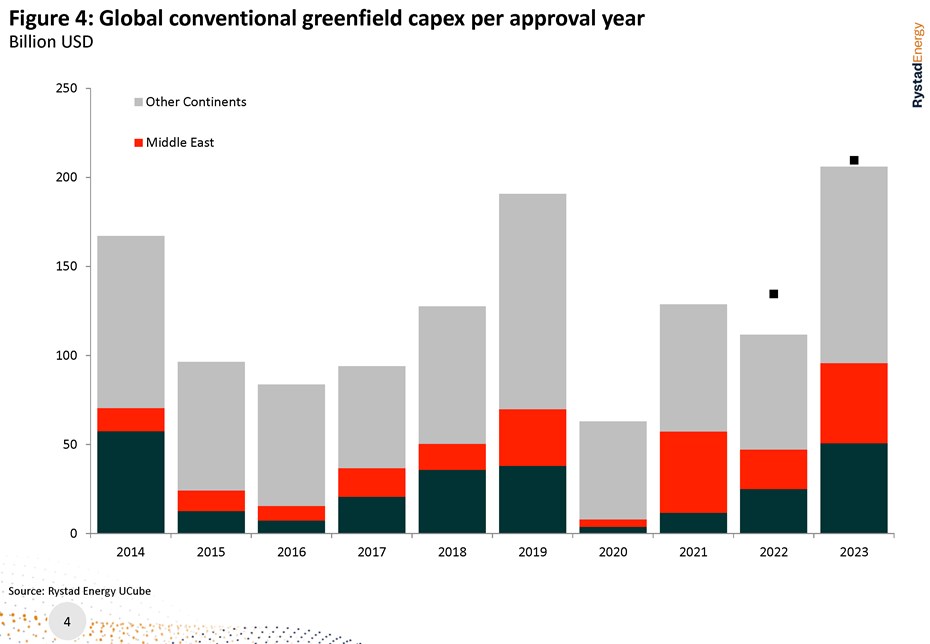 Cost inflation to drive up investments: Total investments for 2023 are predicted to be around $550 billion, reaching pre-Covid-19 levels, representing a modest growth of about 9%. The increase in the forecast is mainly driven by assumed higher inflation. Rystad Energy expects shale/tight oil investments to increase almost 10% this year, with our base assumption being a 15% increase in costs for public shale companies. On average, we estimate inflation for conventional resources will be around 5-10% in 2023. The regions expected to see double-digit investment growth are the Middle East and Europe, growing by 20% and 21%, respectively.

Accelerated Energy Transition: We are in the middle of a new investment cycle where the strategic focus of oil and gas companies is shifting towards portfolio rationalisation and decarbonisation. In 2023, while we expect an oil price recovery, upstream investments are only expected to grow modestly despite healthy balance sheets and strong cash flows. This showcases a fundamental shift in the allocation of capital by the industry, which we believe is well-positioned to accelerate the energy transition. A growing number of companies are channeling their budgets into low-carbon business units in line with their respective diversification and low-carbon commitments. 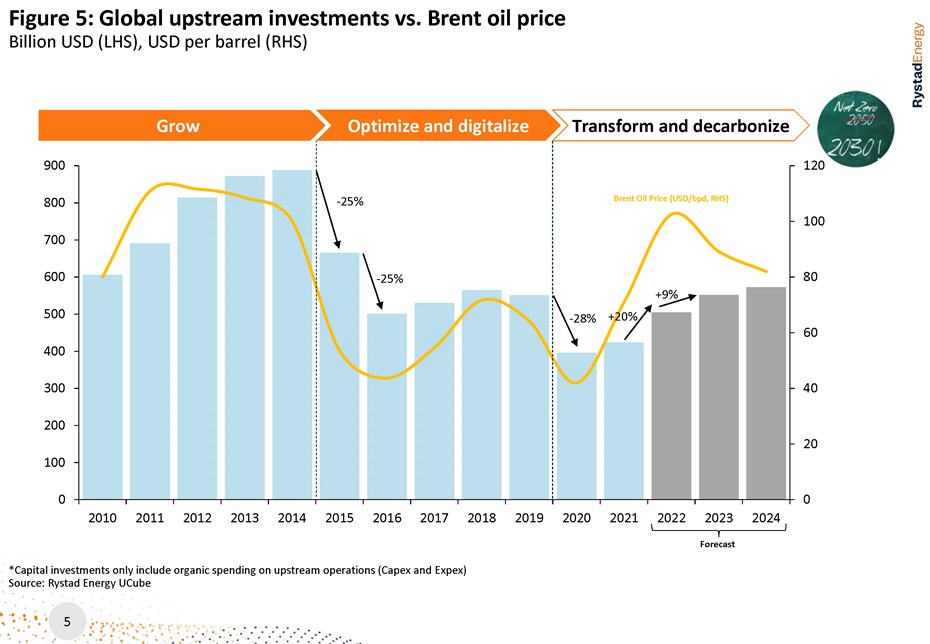 Even under the most aggressive climate scenarios, volumes would be needed from the under-development and discovered assets to meet demand. Though declining, demand for hydrocarbons will remain an essential part of the energy mix for several years. Under such a scenario, the lowest cost and least carbon-intensive barrels will have a significant competitive advantage. We expect to see major oil and gas operators making efforts to make their supply more resilient on both cost and emissions intensity parameters in 2023. 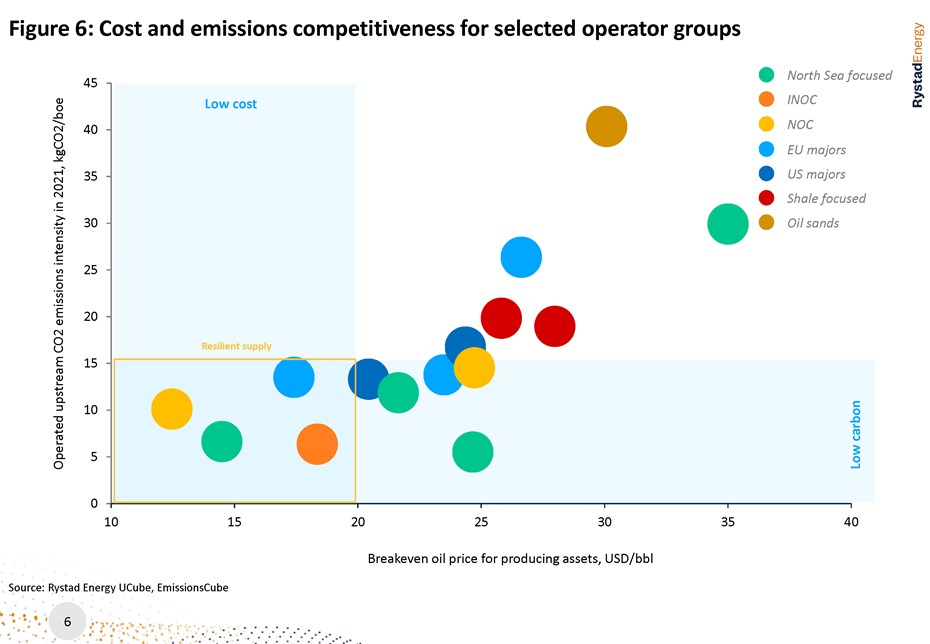