Improving hydrogen storage in the fight against climate change

Hydrogen is now widely recognised as a key vector in the fight against climate change, because it has the ability to decarbonise some energy end use applications better than direct electrification and because in contrast to electricity, it can be stored at much larger scale and for much longer periods. Herein, we will examine the options and considerations for the storage of hydrogen, that are necessary to realise long term storage of large amounts of energy, up to and including inter-seasonal storage, via the use of hydrogen.

The storage of gas in subsurface reservoirs as geological energy storage, whether as natural gas or hydrogen (the working gas), requires a cushion gas to prevent brine from entering the production stream and to maintain the required reservoir pressure to ensure deliverability. As depleted gas fields are now being considered as subsurface storage sites for hydrogen, the in-situ gas could be used as the cushion gas. For gas storage in saline aquifers, where there is very little in-situ gas present, there is a requirement to use a cushion gas that is significantly less expensive than the working gas. Options for aquifer storage cushion gasses include nitrogen, due to its low price, and CO2, due to its high compressibility and potential for secure storage.

During the injection/production cycles, mixing of the gas components is inevitable, therefore, numerical simulation of any storage scenario must confirm that the working gas can be produced with minimal cushion gas contamination. Once mixing takes place, the different gaseous components will alter the properties of the gas mixture and introduce significant uncertainty into the expected behaviour of the injected, stored and produced gas. Thus, the accurate quantification of the gas mixing zone is of paramount importance. Accurate thermodynamic reference data for relevant fluid mixtures can be used for gas storage modeling and is an important tool to enhance the compliance for scenario modeling results. 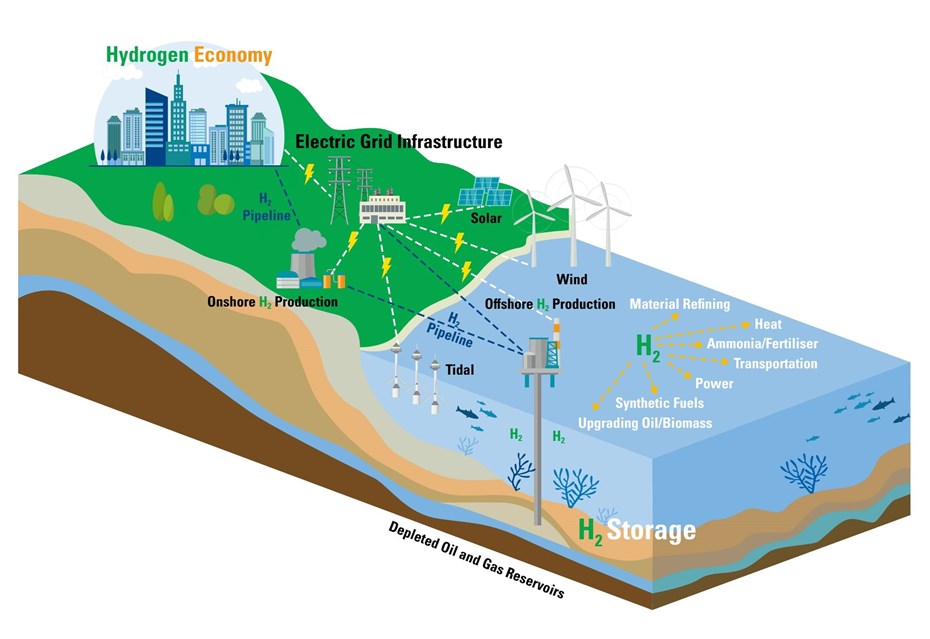 The thermodynamic properties of hydrogen gas mixtures can be employed to design and optimise hydrogen production units, transportation, and storage processes. To determine the properties of hydrogen-rich mixtures, we must understand the stream composition, and the temperature and pressure conditions of the stream, so these data can be inserted into thermodynamic models.

A recent study at TÜV SÜD National Engineering Laboratory predicted phase behaviour, density, and viscosity of gas mixtures related to the hydrogen transportation and storage processes covering the thermodynamic properties of gas/liquid/supercritical regions. The densities predicted for different 50% hydrogen mixtures containing methane, CO2 and a typical north-sea natural gas, suggest that density is influenced more by the presence of CO2 than methane or natural gas. This is due to the fact that the density of CO2 is greater than methane and natural gas. The densities of the streams increment with increasing pressure for all isotherms and decrease with increasing temperature. On the other hand, the density values of mixtures in the presence of higher concentrations of hydrogen are smaller compared to the low hydrogen concentration systems.

The estimated viscosity values for different hydrogen mixtures with methane, CO2 and natural gas over a wide range of pressures and temperatures show that the viscosity of the mixtures increases with augmentation of both pressure and temperature. This can be attributed to the fact that an increase in pressure or temperature increases the velocities of the random motion of molecules and the occurrence of molecular collisions that resist the flow of gas and increase the viscosity. Conversely, the viscosities of the mixtures are reduced with increasing hydrogen mole fractions in the system, as hydrogen has a significantly lower viscosity compared to other gases owing to its smaller molecule size.

As blue hydrogen production via methane/natural gas reforming is an endothermic process, this requires massive heat supply to be fully operational. Moreover, when hydrogen is injected into a depleted hydrocarbon reservoir for storage, it is mixed with methane and potentially has a reactive fluid transport in porous reservoir rock owing to the geochemical reactions with rock surfaces at high temperature and pressure conditions in that environment.

It is therefore crucial to determine the thermal conductivity and thermal capacity of hydrogen and methane mixtures. Our research showed that estimated isobaric heat capacities for hydrogen/methane mixtures are higher in the presence of an increased concentration of hydrogen. This occurs due to the heat capacity of pure hydrogen being higher than that of pure methane at temperatures and pressures above the critical point of methane. It should be highlighted that with pressure increment, the thermal capacities increase for all temperature conditions due to increased intermolecular forces.

Thermodynamic data for hydrogen-containing systems can enable scientists to have a deeper understanding of reactive flow through porous media during hydrogen storage processes. Our research has shown that the thermodynamic properties of hydrogen, when mixed with other gaseous species including methane, CO2 and natural gas, can be determined using adequate thermodynamic models. These models could be successfully applied to various pressure and temperature operating conditions and gas mixture components which cover the conditions experienced within the whole hydrogen-based energy system, from production to storage in geological formations. 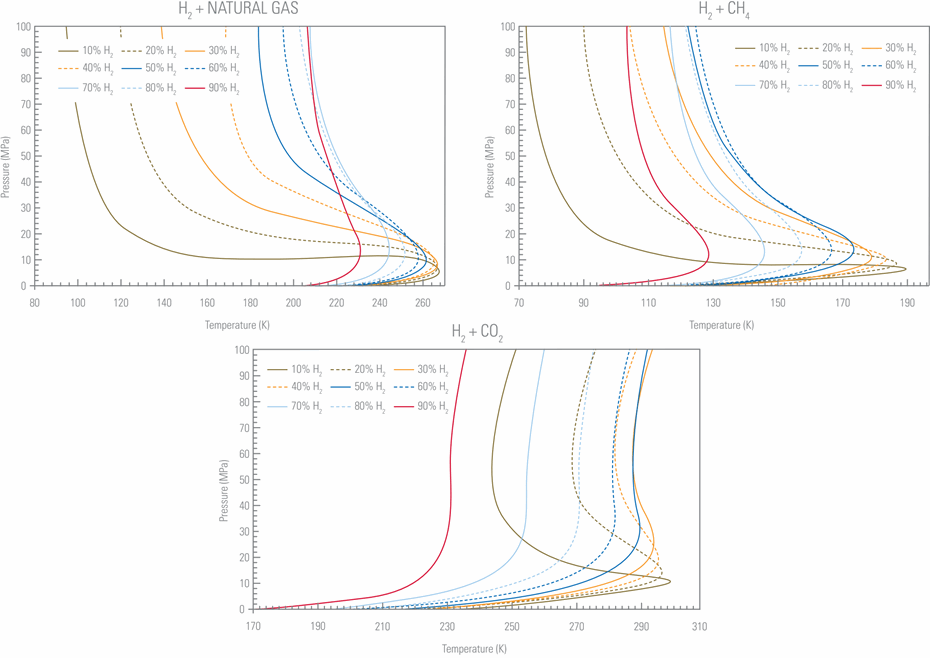 Another target in a hydrogen-based economy is to establish a fundamental understanding of metering technologies and the flow measurement principles behind them. In this regard, the thermophysical properties of hydrogen-mixed gases are crucial to understand and model hydrogen transportation and flow measurement processes. The thermophysical properties of hydrogen-containing gas mixtures over a wide range of pressures and temperatures are pivotal to the design and optimisation of hydrogen production units, transportation, and storage processes.

While the ability to precisely determine the quantity of hydrogen geologically stored will be a fundamental foundation of a large-scale hydrogen value chain, it does present some unavoidable technical challenges. While many suitable technologies exist, the future challenge of integration and economic feasibility must not be understated.

Venturing into the hydrogen market couldn’t be more vital