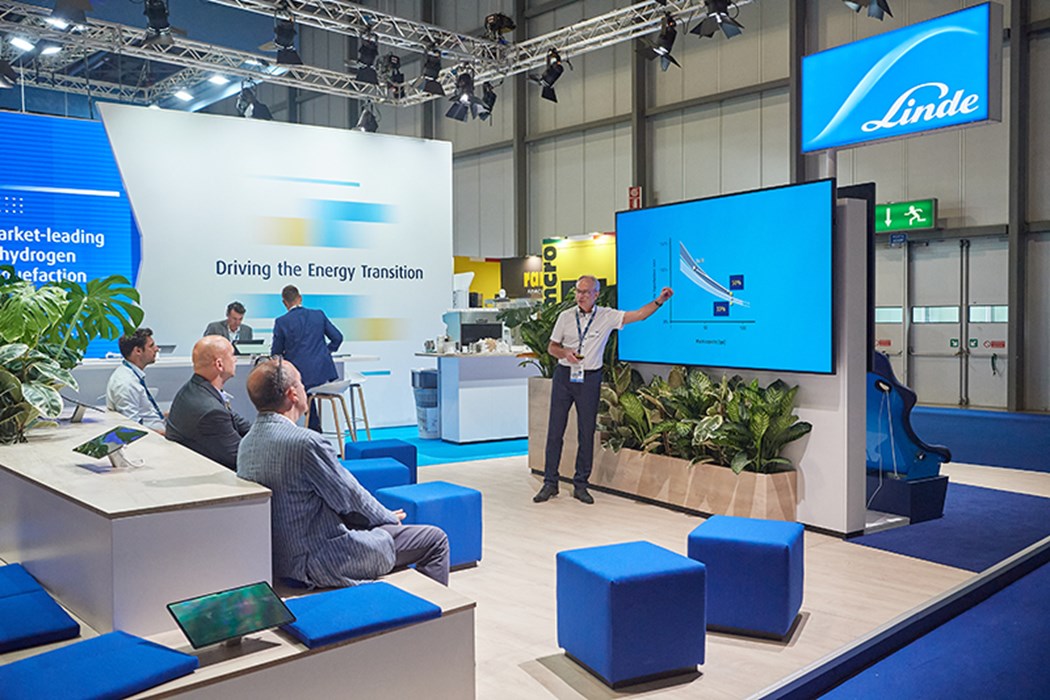 The Linde stand at Gastech 2022 in Milan. Linde has been in the hydrogen business for more than 100 years with expertise and experience throughout the value chain.

In its recent report discussing hydrogen’s role on the pathway to net zero by 2050, the Hydrogen Council states that “clean hydrogen (both renewable and low carbon) offers the only long-term, scalable, and cost-effective option for deep decarbonisation in sectors such as steel, maritime, aviation, and ammonia”.

However, deep decarbonisation in these “hard-to-abate” sectors is easier said than done.

A pioneering past and future in hydrogen

“Linde has been in the hydrogen business for over 100 years now,” explains David Burns, VP Linde Clean Energy. “Our expertise and experience throughout the value chain is unrivalled, and we can draw on it to help accelerate the energy transition. We’re hydrogen-ready now.

“Clean hydrogen is the key ingredient when it comes to green steel, sustainable aviation fuel, alternative drop-in fuels for shipping and of course, green ammonia – which itself can be used as a zero-carbon fuel or as an energy vector for clean power.”

Burns adds: “As a global leader, we can offer our expertise in production, distribution and storage when exploring these opportunities.”

Given that hydrogen has the potential to avoid 80 gigatons (GT) of cumulative CO2 emissions from now through 2050, fuel switching is clearly the end goal. But it’s not necessarily the starting point.

“The viability of green hydrogen is largely dependent on having a continuous and viable supply of green power. That’s what will determine the pace of uptake,” explains Joachim von Scheele, Director Metals & Glass at Linde.

“But in many areas, there are near-term decarbonising steps that can be taken today to prepare for a switch to hydrogen in the future.

“Maximising the energy efficiency of the existing processes is where we always start with our customers.”

“We can then look to carbon capture storage and utilisation (CCUS) technologies as a viable alternative for removing CO2 from the flue gases released by industrial processes,” von Scheele says.

Customers might switch to hydrogen one process at a time, starting small and scaling up as needed. Downstream uses of oxygen from the electrolysis could be explored as well as the heat from off-gases could be harnessed for further efficiency gains at the electrolyser.

“It’s about growing over time and adapting to customers’ needs,” adds von Scheele.

Steelmaking: Where hope hangs on hydrogen

Hydrogen know-how is one thing - but industry-specific knowledge is just as important, David Burns explains.

“For Linde, steel is already a very important business,” he says. “We’re very familiar with it and we’re well connected with the major players. So as customers look to decarbonise, we’re in a good position to step in and support.”

When steel is produced using the conventional blast furnace-based route, it emits about two tons of CO2 for every ton of steel, making it one of the worst offenders when it comes to emissions: 8% of global annual emissions to be precise. For an industry in which fossil fuels are baked into the production processes, all hope for decarbonisation hangs on hydrogen.

“Truly green steel will rely on green hydrogen, which can be used as a source of heat and power as well as a reducing agent,” explains von Scheele. “And we’ve proved that it works.”

He is referring to the world’s first full-scale trial conducted with steelmaker Ovako in March 2020 where steel was heated using green hydrogen together with Flameless Oxyfuel before rolling in a full production environment. Results showed hydrogen could replace propane as burner fuel with no loss of performance.

So far, when it comes to hydrogen, the good news is that viable decarbonisation solutions exist. It works. And while these sectors may be hard to abate, at least it’s easy to see where the solution lies.