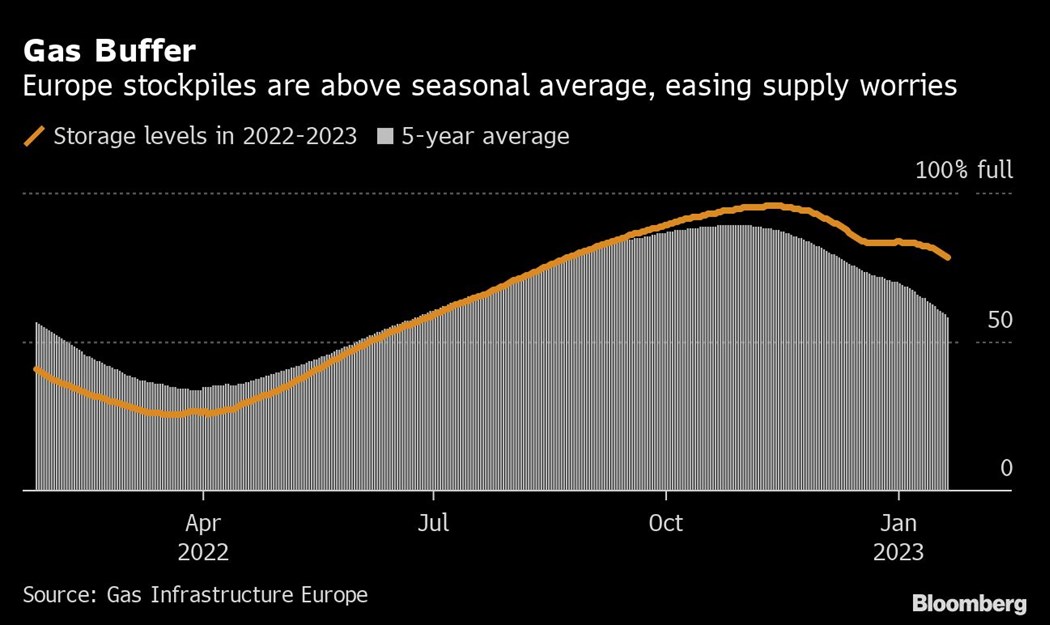 (Bloomberg) -- European natural gas fell for a third day as ample supplies and the return of milder weather help to ease the region’s energy crisis.

Benchmark futures declined as much as 4.8% before paring the loss. Demand is expected to soften in the next few days, with temperatures forecast to rebound following a cold snap. There are also expectations for more liquefied natural gas, as a key export terminal in the US takes steps to restart.

Strong LNG shipments and healthy gas stockpiles — which are well above normal thanks to reduced consumption and a relatively mild winter — have significantly eased fuel prices over the past few weeks. That’s leading some politicians and economists to suggest the worst of Europe’s energy crunch is over.

“We can afford to be more optimistic,” analysts at Deutsche Bank AG said in a note this week. “Gas storage is up and gas prices are down. Inflation is falling and uncertainty is declining.”

The business outlook for Europe’s biggest economy, Germany, brightened as the recession many feared looks increasingly less likely, according to data from the Ifo Institute, a Munich-based economic researcher. “The most important risk for the German economy was a gas-rationing scenario,” Ifo President Clemens Fuest told Bloomberg TV on Wednesday. “That risk is off the table now.”

Pipeline supplies from Norway are rising following a maintenance-related drop, also adding to bearish sentiment, though more works at the country’s facilities are scheduled this month.

While risks remain, prices in Europe are expected to stay within a range of €50 to €100 this year, according to Deutsche Bank. That’s a steep decline from last year’s peaks, although still higher than historic averages.