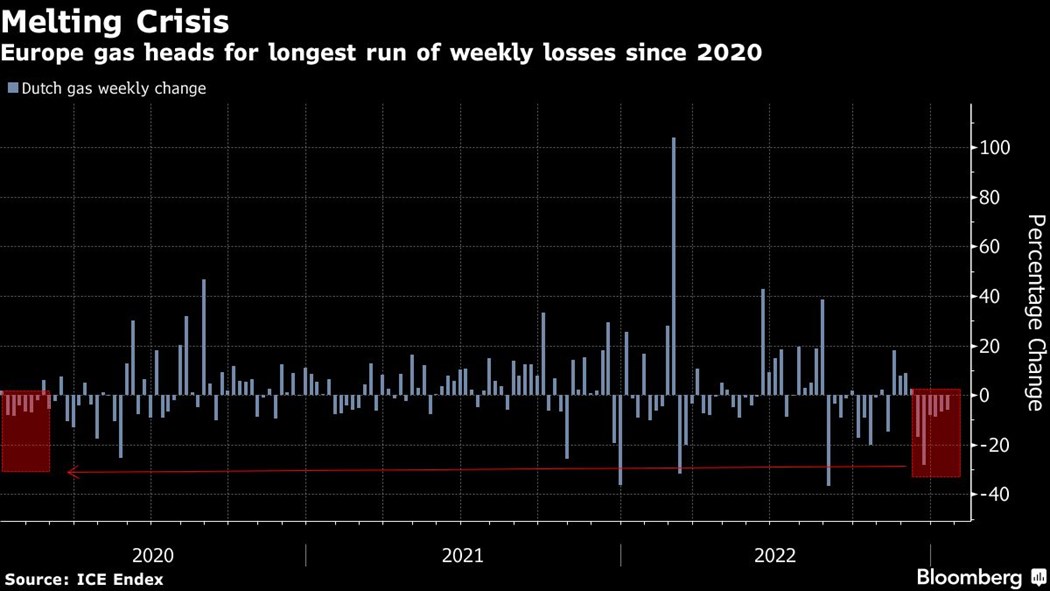 Benchmark futures fell on Friday, heading for a sixth consecutive weekly decline, the longest since February 2020. A cold front, moving through the British Isles and parts of continental Europe, is expected to ease by the end of the month with temperatures rising in the northwest, according to forecaster Maxar Technologies Inc.

That’s keeping prices in check even as supplies from Norway remain capped amid outages. Exports from Russia sent via Ukraine have also declined from earlier this week and are expected to inch even lower on Friday. Some analysts suggest that might be due to curbed buying.

Dutch front-month futures, Europe’s gas benchmark, traded 1.6% lower at €59.75 a megawatt-hour by 9:50 a.m. in Amsterdam. The contract has lost about 8% for the week, after hitting a 16-month low recently. The UK equivalent futures were down 4%, also heading for a sixth weekly decline.

Gas prices have dropped significantly over the past month due to the mild winter, easing a historic energy crisis that has fueled inflation. Storage levels remain well above seasonal norms — even after recent withdrawals amid the cold snap — and the region continues to pull in imports of liquefied natural gas.

Even so, traders are closely watching supply and competition with Asia for LNG. The maintenance-related drop from Norway — the region’s top supplier — and outages at LNG terminals elsewhere highlight the market’s tightness.

Demand discipline is also in focus after the recent drop in prices. So far, energy savings in both industrial and residential sectors have helped Europe to avoid gas shortages this winter. Nearly 80% of households in the continent’s biggest consumer, Germany, lowered indoor temperatures in November and December, according to a report by smart-home company Tado.

“While the outlook has certainly improved, we still expect gas price volatility in the coming months,” analysts at JPMorgan Chase & Co. said in a note Friday. “The market should not become too complacent given the warm weather so far this winter.”