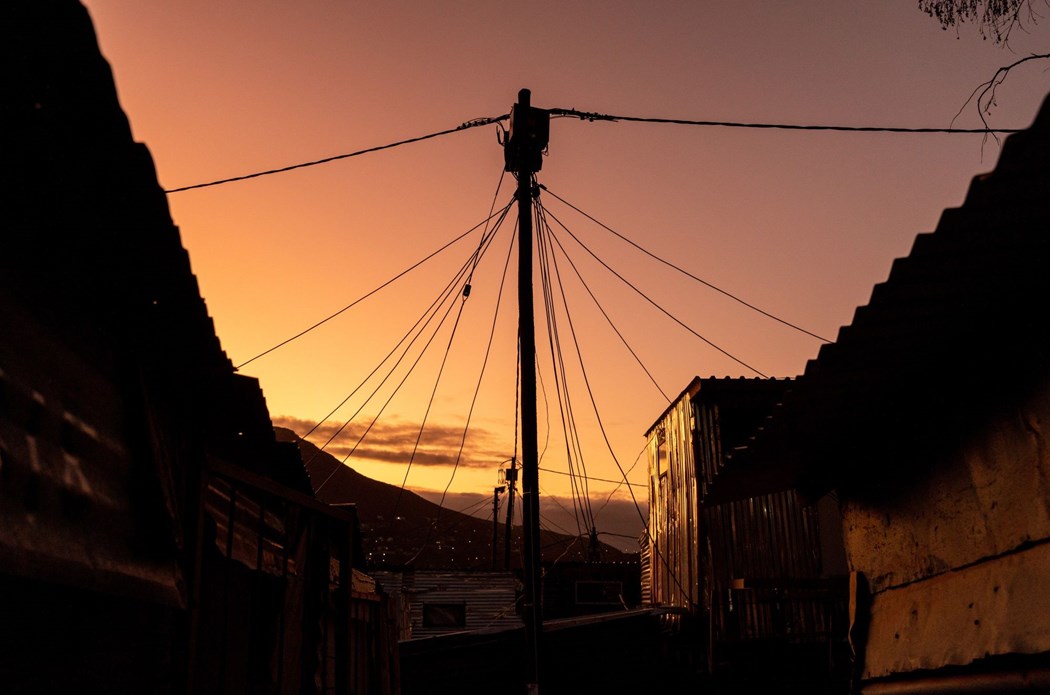 Electrical power lines above informal housing in the Imizamo Yethu settlement in the Hout Bay district of Cape Town, South Africa, on Wednesday, Aug. 3, 2022. South Africa's state-owned power utility Eskom Holdings SOC Ltd. warned it may have to implement rolling blackouts for the first time in more than a week due to a shortage of generation capacity. Photographer: Dwayne Senior/Bloomberg

(Bloomberg) -- The most severe blackouts in South Africa’s history have left the government struggling for ways to mitigate its impact on businesses and livelihoods, with efforts to buy more power from private producers and neighboring countries.

Africa’s most industrialized nation is facing more than four hours of electricity cuts at a stretch because state-owned utility Eskom Holdings SOC Ltd. can’t produce enough power from its old and poorly maintained plants to meet demand. Although the country has faced rolling blackouts since 2008, a succession of action plans have failed to provide lasting solutions. The government’s latest pledge to intervene comes after 6,000 megawatts of capacity was cut from the national grid over the weekend as power stations malfunctioned.

The crisis is hammering an economy that’s been struggling to rebound from the pandemic and rebuild battered business confidence. The duration and frequency of the outages don’t allow for batteries used as backups to be recharged and some firms are running up huge bills buying diesel for their generators. Small businesses have been hit particularly hard.

“We have a backlog and I had to cancel some orders because we couldn’t accept them due to the prolonged power cuts,” said Sibongile Mufamade, a laundromat worker in Radiokop, west of Johannesburg, who fears losing her job. “This is the worst we’ve experienced and it’s hurting small businesses.”

President Cyril Ramaphosa cut short an overseas trip to oversee the government’s response to the crisis and is due back in the country later on Tuesday. He said he’d held an emergency virtual meeting with his ministers and officials, and solutions were being formulated and implemented.

“We will remain seized with this issue until the situation is resolved,” he said in his weekly newsletter to the nation. The recent power cuts have “reminded us how unstable our aging power stations are. It has given greater urgency to the measures we announced two months ago to stabilize our electricity supply,” he said.

Eskom, which supplies more than 90% of South Africa’s electricity, on Monday said it intended to begin signing deals this week to buy 1,000 megawatts of additional power. The utility has a nominal generation capacity of about 45,000 megawatts, but more than half of that has been off line due to breakdowns or scheduled repairs, and it has previously warned that as much as 6,000 additional megawatts is needed to stabilize the system.

The Department of Public Enterprises, which oversees Eskom, has meanwhile announced plans to buy 200 megawatts of power from other countries through the regional Southern African Power Pool.

The rand hit 17.7975 per dollar on Monday, its weakest weakest level since May 2020, but rebounded to 17.7126 by 12:28 p.m. in Johannesburg on Tuesday as the blackouts eased slightly . The FTSE/JSE Africa All Share Index rose as much as 1.5%, after declining for five straight days. Mining and manufacturing companies have been the hardest hit.

A number of mining companies have announced plans to build their own power plants, but it will be some time before those come on line.

“It’s hard to say what the impact on production will be. For now smelting” has been significantly impacted but the impact on mining has been limited, Johan Theron, a spokesman for Impala Platinum Holdings Ltd. said via text message: “We are minimize use of our furnaces and other auxiliary equipment to prioritize available power for mining activity.”

There have been a total of 106 days of outages in 2022, Bloomberg calculations show. On Tuesday, Eskom removed 5,000 megawatts of capacity from the grid, after bringing some tripped units back on line, but its executives have warned that there’s a risk the situation could deteriorate again.

John Steenhuisen, the leader of the main opposition Democratic Alliance, criticized the government’s response to the blackouts, saying none of the interventions it has announced so far were on track.

“If the situation at the stricken generation units doesn’t improve soon, we are teetering on the brink of a complete collapse of our grid,” he said. “This will spell disaster for our entire country.”