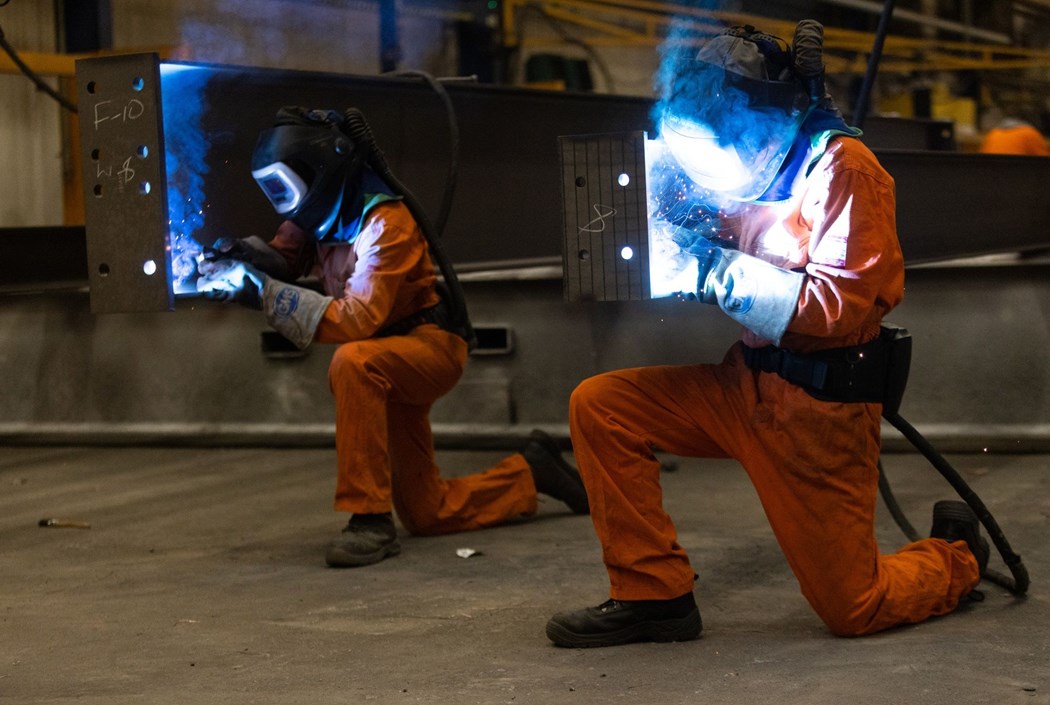 Employees weld sections of fabricated steel beams at Severfield Plc steel fabricators in Dalton, near Thirsk, UK, on Sunday, Aug. 22, 2022. The UK is considering measures to alleviate soaring electricity bills for energy-intensive industries such as steel, ceramics and cement in a bid to protect jobs and boost competitiveness.

The British government unveiled a multibillion-pound bailout to help companies with their energy bills this winter amid soaring prices that threaten to put many out of business.

Under the estimated £40 billion ($45 billion) plan, announced Wednesday in a statement, the government will cap the wholesale energy prices that feed into gas and power contracts for businesses for six months. Thereafter, a review will determine whether ongoing support is needed for specific sectors.

The cap for businesses is set at 21.1 pence per kilowatt-hour for electricity and 7.5 pence for gas, the government confirmed, after Bloomberg News reported the numbers Tuesday. That would impose a discount of roughly 50% on the current wholesale prices this winter, but the markets remain volatile, and the exact discount for each business depends on when it signed a contract.

The government is trying to shield companies from the worst effects of energy prices that have soared since Russia squeezed pipeline flows to Europe after being sanctioned over its invasion of Ukraine. Documents seen by Bloomberg two weeks ago estimated the package may cost from £21 billion to £42 billion over six months. It is separate from a £130 billion plan to help households with their energy bills.

“There’s a very real danger, before we put in place our business scheme, that cafes, pubs and shops could go out of business, and we simply couldn’t allow that to happen,” Prime Minister Liz Truss told reporters on Tuesday during a trip to New York. “That’s why it is right for the government to take the steps that we’ve taken.”

In the UK, business energy costs aren’t limited by regulator Ofgem’s household price cap or by the government’s Energy Price Guarantee for households, so many small businesses have shut in the face of seismic jumps in their bills.

Under the new plans, businesses that have signed fixed contracts since April 1 will have their rates retroactively discounted to equalize the price per unit of energy. Companies on variable rates and large users on flexible contracts that decide when to hedge their energy also will be eligible for support, subject to a maximum discount.

All businesses, regardless of size, will be eligible for the subsidy. That may cover some of the nation’s biggest companies -- such as gas producers and banks -- alongside pubs, cafes and small retailers.

“The package will ease worries about otherwise viable businesses shutting-up shop, and smaller companies, especially, will benefit from the discounted rate,” Matthew Fell, chief policy director for the Confederation of British Industry, said in an email.

“We are relieved that the government has listened,” said Kate Nicholls, chief executive officer of UKHospitality, a trade group. “There must also be a comprehensive package to ensure that there is no cliff edge when these measures fall away.”

Even with the government’s help, businesses still will be paying much higher costs than usual to keep running. Before energy prices started rising last year, wholesale rates were fairly steady for years at about 5 pence for electricity and 4 pence for gas.

Supplier and broker charges still can be added to the new business rates, allowing for competition in the market and more variation in total bills than in the household measure.

That cap on variable tariffs for the next two years is 34 pence for electricity and 10.3 pence for gas. However, those also take into account such costs as sales taxes, and environmental and network levies.