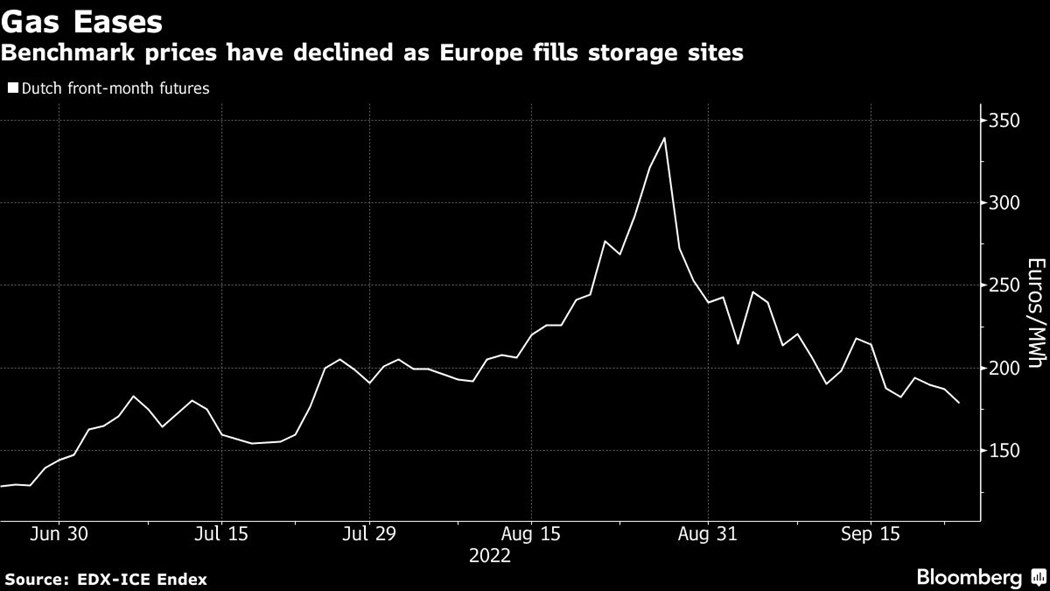 (Bloomberg) -- Natural gas prices in Europe fell for a fourth week, as ample supplies of LNG help countries fill reservoirs days before the start of the heating season.

Benchmark Dutch futures settled 1.1% lower on Friday, extending their longest weekly losing streak since June. Yet, prices are still about six times higher than normal for the time of year.

Europe is racing to ease an unprecedented energy crisis sparked by Russia’s invasion of Ukraine and subsequent supply cuts following sanctions targeting Moscow. Countries across the region are hoarding gas and enacting emergency measures ahead of the heating season, which begins next month.

Gas storage sites on the continent are about 87% full. Four more US liquified natural gas cargoes signaled northwest Europe as a destination, with three set to arrive in early October, according to ship-tracking data compiled by Bloomberg.

Dutch front-month gas closed at 185.495 euros per megawatt-hour, losing 1.2% for the week. The UK equivalent futures settled 0.4% lower in another volatile session, also posting a fourth weekly loss. Benchmark German year-ahead power fell as much as 6.8%.

Still, Europe’s gas market remains sensitive to any potential disruptions, after Moscow slashed supplies to the continent. Preliminary shipment orders for Russian gas crossing war-torn Ukraine indicated flows could drop on Saturday. They may change back to normal overnight, as the market has seen similar developments in the past, but traders are closely watching the updates in case the situation deteriorates.

President Vladimir Putin this week called up as many as 300,000 reservists to reinforce his troops in Ukraine. Russia’s security service also said it thwarted a planned Ukrainian attack on infrastructure delivering energy to Turkey and Europe, a claim that Kyiv denied.

LNG flows to Europe could also decline in the coming months as consumption rises in Asia. An outlook for colder weather in Japan this winter may prompt some utilities to secure some additional spot shipments, adding upward pressure to prices, according to traders. Asian LNG spot rates are currently about three times higher than the 10-year average.

LNG imports have been key to helping European countries deal with the crisis. All eyes are now on the severity of the winter and the response in energy demand in the face of limited gas.

Germany, the region’s largest gas consumer, is seeking to secure more supplies from the United Arab Emirates in the coming days, when Chancellor Olaf Scholz visits the country.

“Gas balances will have to continue relying on demand destruction and strong LNG supply,” Diana Bacila, a senior analyst at Switzerland-based electricity provider Alpiq AG, said on the sidelines of a conference in Duesseldorf, Germany, this week.