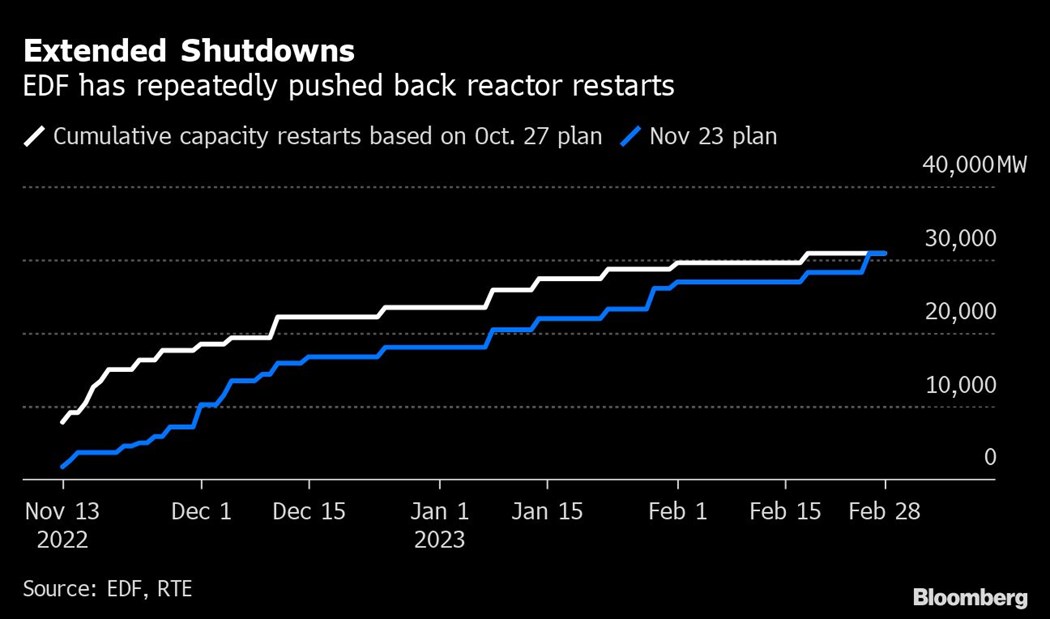 The restart of EDF’s 1,330-megawatt Flamanville 2 unit has been delayed by five days until Dec. 1, the utility said Wednesday on its website. The halt of the Cruas 2 reactor is extended by eight days until Dec. 5, and the restart of Dampierre 2 is postponed by 10 days to Dec. 9.

Longer-than-planned reactor maintenance halts and repairs of unexpected pipe cracks are curtailing EDF’s atomic output and turning France from a power exporter to an importer. The country’s grid operator has warned of potential electricity shortfall as heating demand rises in the colder months while the utility grapples with reactor repairs.

Read more: France Is Losing Its Race to Fix the Reactors Europe Needs

The power crunch, combined with Russia’s gas supply cuts to Europe, has raised energy prices across the continent. The importance of France’s nuclear fleet was highlighted this week as the UK faced the first test of winter, with cold temperatures combining with low wind speeds during the evening peak of power demand. Imports from France to the UK surged Tuesday evening to help fill the gap.

French month-ahead power rose as much as 15.8%, highest in nearly two weeks, while the equivalent price for Germany advanced as much as 15.6%.