Tokyo Heatwave Hints at Even Bigger Power Crunch for Summer 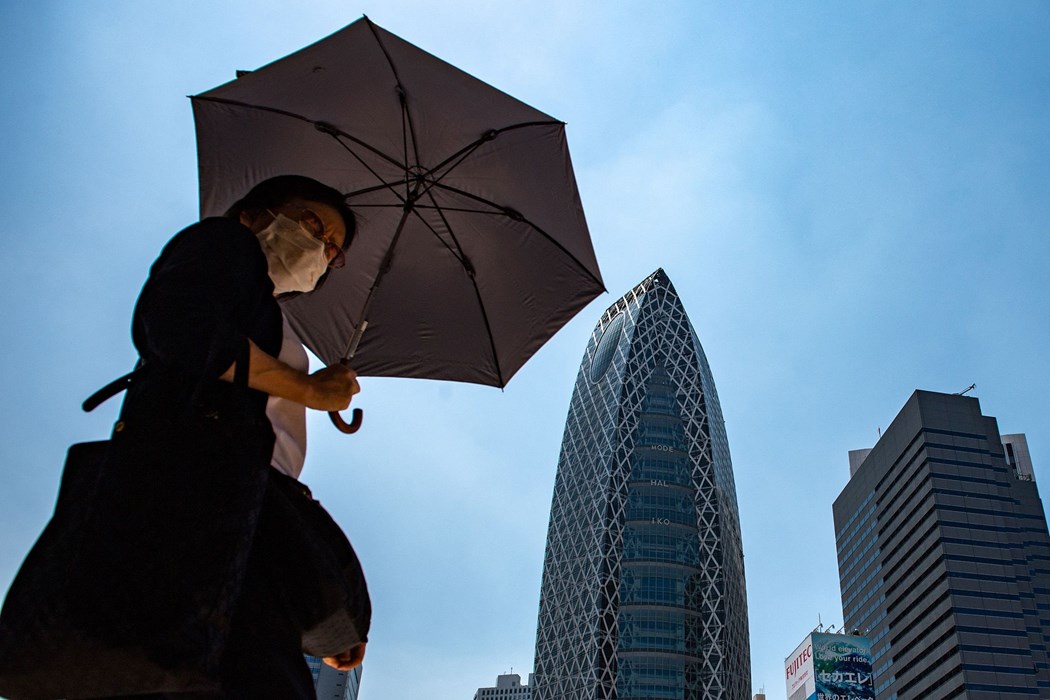 A pedestrian walks with an umbrella to shield from the sun amid a heatwave in Tokyo's Shinjuku district on June 28, 2022. Photographer: Philip Fong/AFP/Getty Images

(Bloomberg) -- Tokyo this week saw its second major power crunch of the year, stretching the grid and forcing offices to turn off lights to conserve electricity. But the worst may be yet to come.

The situation in the nation’s capital so far hasn’t spiraled into a full-blown crisis thanks largely to ample supply in other regions, allowing utilities to send spare electricity. Still, there is a danger that scorching hot weather later this summer will envelop the entire country, heightening the risk of blackouts and renewing the government’s call to save electricity.

Tight power supply, coupled with surging overseas fuel costs, threatens higher electricity bills for households and businesses in Japan, while the specter of outages will require widespread sacrifices to save energy. That means Japan is in for a summer of higher inflation as well as economic and social disruption.

Temperatures in Tokyo have soared above 36 degrees Celsius (96.8 degrees Fahrenheit), making it the worst heatwave for this time in June in more than 100 years. However, that’s nowhere near the highs seen in July and August, when temperatures can approach 40 degrees. Japan’s national meteorologist expects hotter weather through September, with a greater chance of blistering heat in July.

The worst-case scenario is a nationwide heatwave that boosts air conditioning and power demand from Tohoku in the north to Kyushu in the south, leaving little spare supply for Tokyo.

That could create a crisis worse than what happened in March, when cold weather, coupled with power-plant outages after an earthquake, nearly brought down Tokyo’s grid. Only a concerted effort by citizens and companies to cut power consumption helped to avoid a blackout.

The government is putting a request for energy conservation nationwide for the first time in seven year from Friday to the end of September, the broadcaster NHK reported.

Still, it will be harder to demand energy savings during bouts of hot weather, when Japan’s large elderly population is at risk of heat stroke. “Please use the air conditioner when it is hot during the summer,” Prime Minister Fumio Kishida said earlier this week. “Don’t try to forcibly save electricity.”

Eight of Japan’s nine mainland regions, including Tokyo, could see power reserve rates in July fall to just above the level necessary to maintain grid stability, according to the government. Power traders are already betting that supplies will be tighter in Tokyo over the next few months, sending electricity futures surging.

“We need to be ready for the possibility of further supply crunches in Japan this summer,” said Dan Shulman, the founder of Japan-based consultancy Shulman Advisory, which advises clients on the nation’s electricity market. High temperatures can hit different parts of the country, he said, while “the supply side of the equation can also have problems.”

Indeed, an early end to Japan’s rainy season means the country is entering the summer months with lower reserves of water at dams, which could curb output at hydroelectric facilities and even thermal power plants. Water reserves at Sameura dam in Kochi prefecture are more than 50 percentage points below normal, while the Aburagi dam in Kyushu is about 30 points below this time last year.

And even though Japan’s utilities are working to restart idled power plants to help bolster generation capacity, there have been a few setbacks that may tighten supply. Kansai Electric Power Co. delayed the restart of its Ohi No. 4 nuclear reactor until late July from its initial target of earlier in the month.

Meanwhile, increased electricity demand amid the heat is prompting the nation’s utilities to buy more liquefied natural gas to fuel power plants. Jera Co., the nation’s top electricity producer, and Kansai Electric are looking to buy shipments for August onward, but will need to pay near record-high rates for the country due to a global fuel supply crunch.

In a move that could further pressure fuel costs, President Vladimir Putin signed a decree to transfer rights to the Sakhalin-2 natural gas project to a new Russian company. Japanese trading houses Mitsubishi Corp. and Mitsui & Co. own a combined 22.5% of the Sakhalin-2 project, and a majority of the gas produced there supplies Japan. Any disruption to LNG deliveries will further stretch Japan’s power sector.

Consumers are already being hit by rising fuel costs. Tokyo Electric Power Co. expects the average household utility bill in August to top 9,000 yen ($66) for the first time in more than a decade.

(Updates with government’s request to conserve power in seventh paragraph.)

The Great European Energy Market Bailout Is Only Getting Started