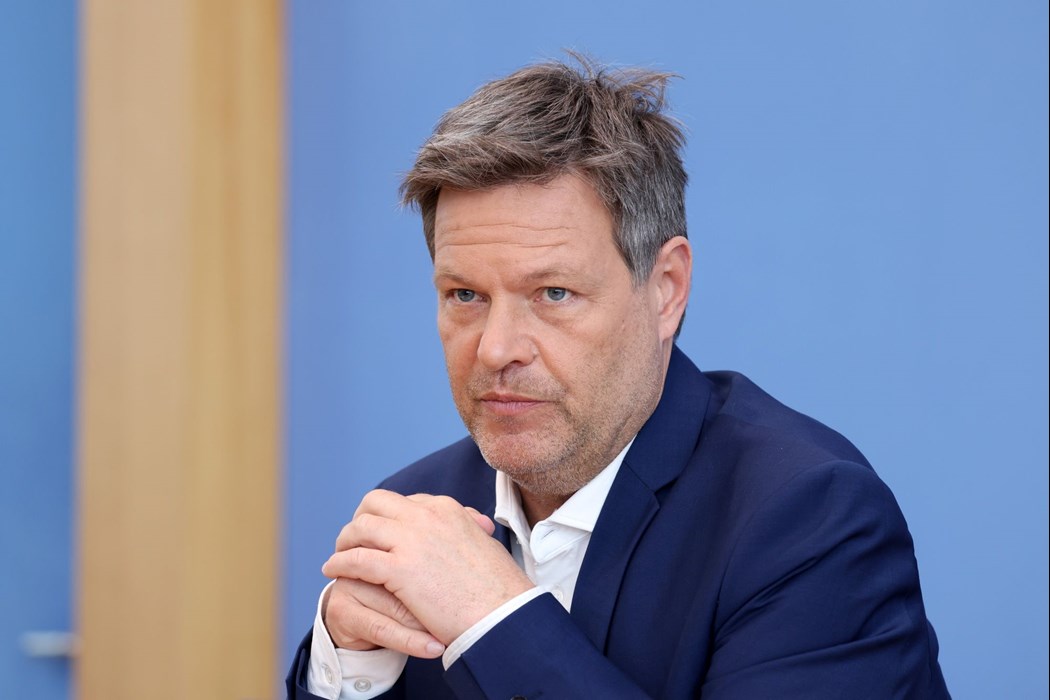 Robert Habeck, Germany's economy and climate minister, during a news conference in Berlin, Germany, on Wednesday, April 6, 2022. Habeck said it would be "a logical step" to back up the political decision to reduce Russian coal dependency by including a Russian coal import embargo in a European Union sanctions package "at some point".

“We aren’t dealing with erratic decisions but with economic warfare, completely rational and very clear,” Habeck, the deputy chancellor in Olaf Scholz’s government, said Saturday on a panel. “After a 60% reduction, the next one logically follows.”

German leaders are stepping up warnings of impending turmoil and natural-gas shortages in Europe’s biggest economy, which relies on Russia for about one-third of its energy. Putin has gradually reduced supplies after European countries imposed sanctions in response to Russia’s invasion of Ukraine.

German utilities are at risk of cascading failures that might require activating a legal clause that would allow them to pass on price increases outside of contract commitments, Habeck said.

Germany has refrained from activating the measure for now because it would lead to an “immediate price explosion” for consumers, he said at an event sponsored by the Die Zeit weekly. The government is working on an alternative, he said, without elaborating.

“If one company were to fail, or other companies were to fail, it’s like a domino effect that would very quickly lead into a deep recession,” he said.

European energy companies are facing a squeeze after Russia curbed flows on a key gas link earlier this month, forcing utilities to buy fuel on the spot market at elevated prices. High power prices are increasingly prompting German factories and businesses to curb demand and the government has activated the second stage of a three-stage gas emergency plan.

Russia has reduced shipments through Nord Stream by 60% and the pipeline is scheduled for a full shutdown this month for maintenance. Germany has raised doubts that Nord Stream will resume supply after that.

Russia’s goal is to keep energy prices high and “destroy the unity and solidarity of the country,” Habeck said.

Germany’s government and energy giant Uniper SE are discussing stabilization measures. Finance Minister Christian Lindner said any additional government assistance would be in the form of a loan guarantee.

Gas rationing -- if it came to that -- presents challenges because the grid often isn’t separated between residential and commercial customers, Habeck said.

“That will probably then be regulated at the expense of the factories that are not connected to a mixed network,” Habeck said.

Household customers in Germany are protected by law from gas shutoffs.

The Great European Energy Market Bailout Is Only Getting Started