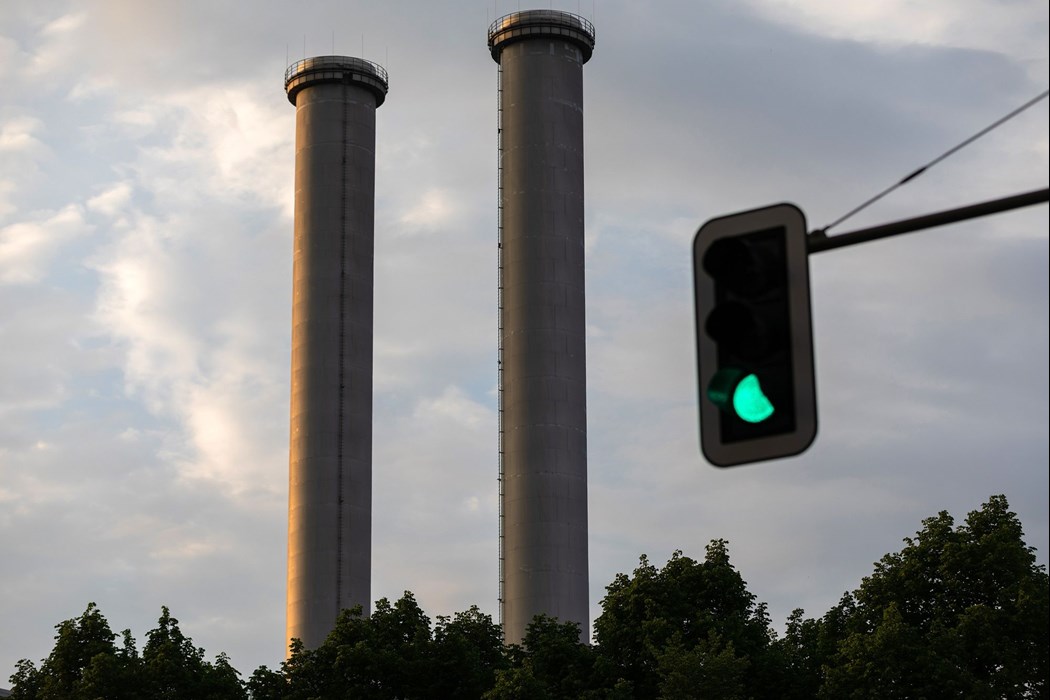 Chimney stacks at the Mitte Combined Heat and Power (CHP) natural gas power plant, operated by Vattenfall AB, beyond a green traffic signal in Berlin, Germany, on Tuesday, May 17, 2022. The European Union is set to unveil a raft of measures ranging from boosting renewables and LNG imports to lowering energy demand in its quest to cut dependence on Russian supplies which accounted for about 40% of the bloc’s gas demand. Photographer: Krisztian Bocsi/Bloomberg

(Bloomberg) -- European Union lawmakers voted to allow natural gas and nuclear energy to be labeled as green investments, removing the last major barrier to potentially billions of euros of funding from environmental investors.

Parliament fell short of the 353 votes needed to reject the inclusion of gas and nuclear technology in the EU’s so-called Taxonomy, a list of economic activities deemed in line with the bloc’s transition to climate neutrality. Barring an unlikely objection from member states, it now means the regulation will start at the beginning of next year.

The vote means that new gas plants will be able to tap into a fresh pool of money from environmental, social and governance investors, albeit for a limited time and only when those facilities are replacing coal-fired stations. It will also serve as a boost to Europe’s struggling nuclear sector, which countries like France have touted as a low-carbon energy source crucial for the replacement of Russian fossil fuels.

The result is a relief for the European Commission, the bloc’s executive branch, which had first mooted the proposal late last year. The legislation had looked increasingly unpopular after Russia’s invasion of Ukraine put into question the role of gas as a transition fuel amid soaring prices and the threat of reduced supplies.

The bulk of the conservative European People’s Party had voted Tuesday to support the inclusion of gas and nuclear after a last-minute plea by Ukraine’s energy minister, German Galushchenko. In a letter to lawmakers, he said excluding the energy sources from the taxonomy could be “particularly challenging” for the country’s post-war reconstruction.

Scientists, environmental activists and even a large part of the investment management industry had criticized gas and nuclear getting a green label on concerns that it could divert investment from renewables and tarnish what the EU had pitched as a “gold standard” for green finance.

“Since the taxonomy eligibility of nuclear energy and natural gas is not only politically, but also scientifically contentious we would have preferred if the Parliament had decided against inclusion of these activities in the taxonomy,” said Thomas Richter, chief executive officer of the German Investment Funds Association.

Still, Austria and Luxembourg have signaled that they plan to pursue a legal challenge to the inclusion of the two energy sources in the taxonomy, though it’s a process that could take years.

“It’s completely clear that both nuclear energy, and fossil gas have nothing to do with sustainability,” Leonore Gewessler, Austria’s energy minister, said Wednesday. “We will naturally challenge. We have already made preparations and Luxembourg has announced it will join us.”

(Updates with details throughout)