Climate goals require swapping clean energy for dirty sources, but political realities mean that the transition is unlikely to follow a smooth path

(Bloomberg) --The last few months have been a rollercoaster for energy markets in Europe. Even before winter began, traders were freaking out that the continent might run out of natural gas before spring. Some even bought the fuel at 10 times the average price in 2020.

In the middle of all that, Germany moved ahead with a plan to shut off nearly 50% of its nuclear power plants, with the rest scheduled to close by the end of 2022. Some asked how a climate-forward country could lay waste to a source of zero-carbon power, especially when there's a shortage of it. Others pointed out that Germany's renewables investments are for naught if it has to fill up the nuclear quota using dirty coal.

Outrageous, right? Not so fast, says Nikos Tsafos, an energy and climate analyst at the Center for Strategic and International Studies. It's very easy to solve climate change if I'm not politically constrained.

Any sensible climate plan requires that clean energy replaces dirty sources quickly, while at the same time efficiency measures cut the demand for energy overall. That, in theory, would result in a smooth decline in emissions as laid out in scientific models. Reality, however, is anything but smooth. The transition will inevitably be shaped by human particularities.

Germany's divorce with nuclear began in 2000, when the country's parliament voted to end its reliance on uranium-powered plants. The concerns were tied to perceived environmental risks of nuclear waste and fears of another meltdown like the 1986 Chernobyl disaster.

Then-chancellor and trained physicist Angela Merkel even tried to find ways to extend the lives of existing nuclear plants, while living up to the promise of not building new ones. But voters wouldn't have it. In 2011, only months after a tsunami triggered the Fukushima meltdown in Japan, parliament recommitted to the nuclear phaseout with 513 voting in favor and 79 against. Many of those who opposed the plans wanted an even faster exit. 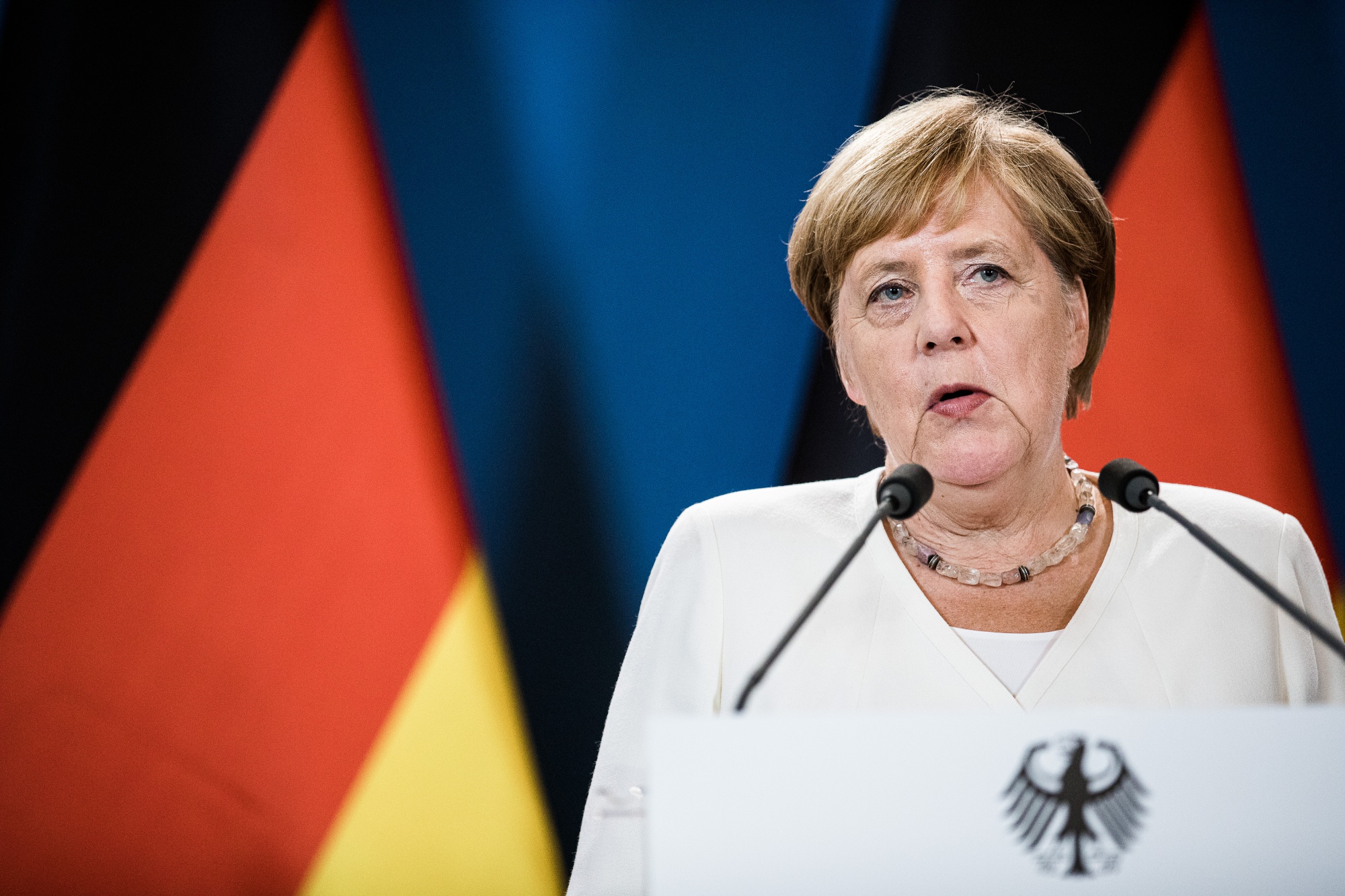 Could Germany have cut carbon emissions faster had it given nuclear power a chance? No doubt. The U.K., for example, is extending the lives of some of its nuclear plants and even building new ones. It will stop using coal for electricity by 2024, six years ahead of Germany's target date for quitting the dirtiest fossil fuel.Germany is also set to miss its climate goals for this year and the next.

But we cannot expect people to always make the most rational choice. Countries have quite different considerations on deciding a path to net zero. Those considerations are not only economic, said Albert Cheung, head of analysis at BloombergNEF. There is no one answer and countries have to find that pathway based on the advantages they have and societal factors at play.

The nuclear shenanigans aren't enough to take away Germany's crown as a climate-forward country. The politics that sped up the nuclear phaseout also created room for a renewables boom.

Starting with the Renewable Energy Sources Act in 2000, Germany's energy policy, known as created some of the most generous subsidies for solar power. These came in the form of guaranteed prices (or feed-in tariffs) for generating solar power. German taxpayers paid billions of euros to support a new technology. The demand created giant solar companies, including many in China, that progressively made the technology cheaper (with additional support in the form of Chinese subsidies) and thus more accessible to the rest of the world.

Political pressure to implement the renewable energy law in 2000 was directly connected to the decision to phaseout nuclear, said Simon Mueller, Germany director at think tank Agora Energiewende. The history of these things always must be looked at together.

In other words, without Germany's support for a nuclear phaseout, voters may not have been willing to stomach the bill for expensive renewable power. The upshot is that solar (and wind) power prices today can often be lower than existing fossil-fuel power.

And, in the end, it may not have been so bad anyway. Compare the different fuels that contributed to Germany' electricity in 2010 and 2021. Even as nuclear power more than halved, coal's contribution fell and gases did not rise. Renewables more than doubled. 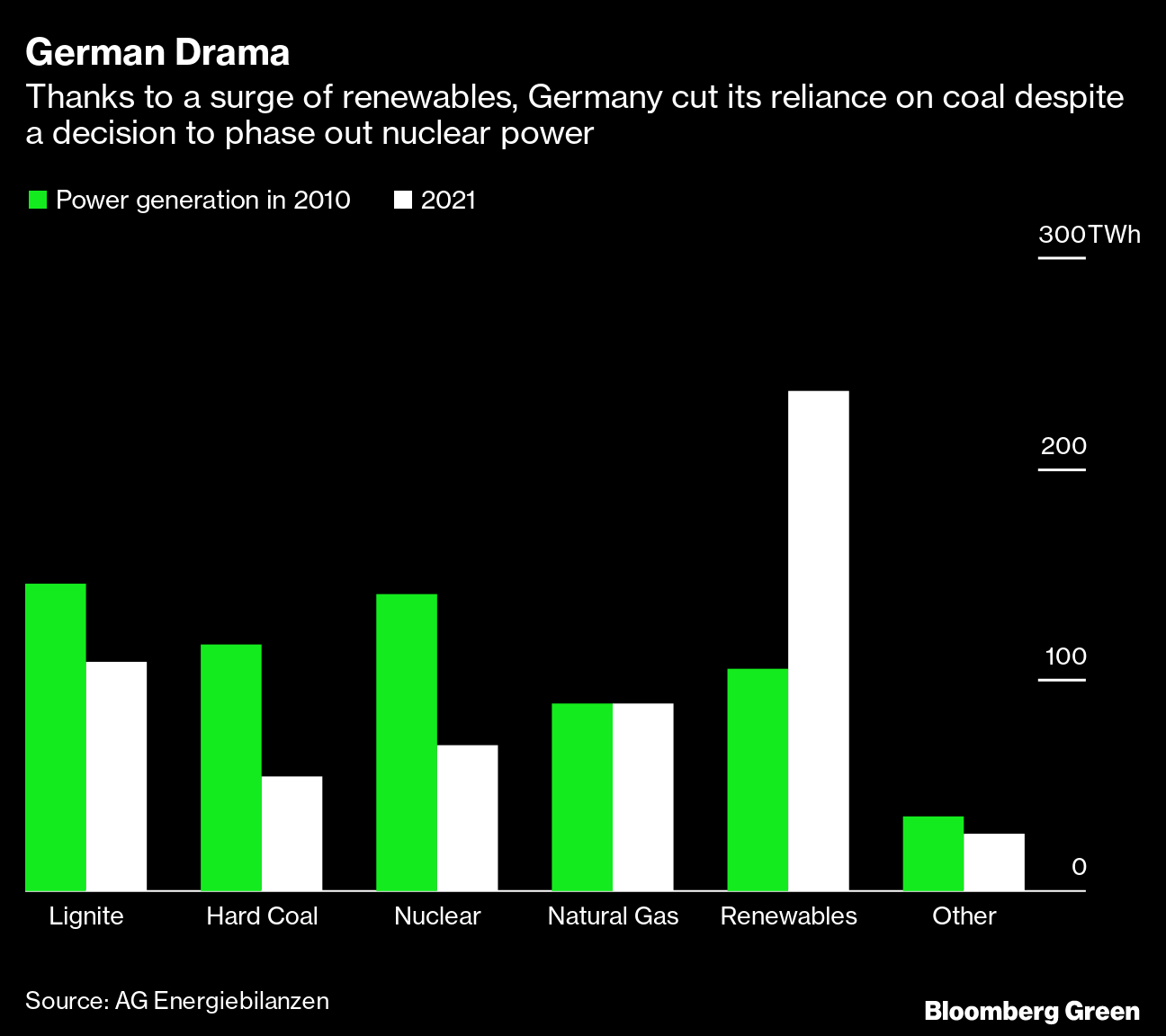 What many miss is that nuclear-forward countries aren't always doing better. While Germany's nuclear power generation in 2021 was 60% lower than its peak, the U.K.'s was 50% lower and Japan's 87% lower. If things go to plan, both the U.K. and Japan will see nuclear play a longer and bigger role in the transition. Germans are happy to sit this one out, and perhaps pay for energy storage to back up renewables.

By Akshat Rathi , Will Mathis