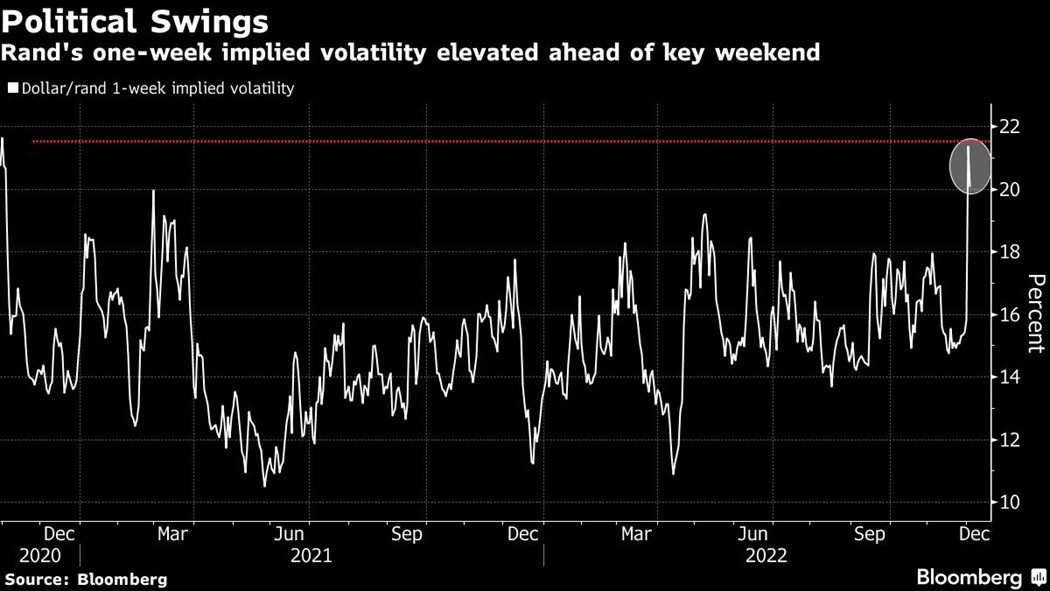 The scandal threatening the future of Cyril Ramaphosa’s presidency rattled South Africa’s financial markets this week and the instability risks inflicting more damage still on the country’s currency and bonds.

There’s no obvious long-term successor to lead the country if the crisis ends up costing the president his job, so it’s unclear what would happen to his reform agenda, which is aimed at kick-starting start one of Africa’s largest economies. That, investors say, is a recipe for more outsized swings in the rand, which saw its implied volatility this week soar to a level last seen in 2020 when the global economy was reeling from the onset of the Covid pandemic.

“The immediate focus remains on whether the president resigns or fights on,” said Matete Thulare, the Johannesburg-based head of foreign-exchange execution at Rand Merchant Bank in a note to clients. “Rightly or wrongly, if he goes, voluntarily or otherwise, the rand will run again.”

When news broke that Ramaphosa could face impeachment due to a potential constitutional breach, traders responded by taking an ax to the currency and pushing the country’s borrowing costs up by the most since 2015. The cost of insuring the debt against default jumped and South African bank stocks posted the worst one-day loss in more than two-and-a-half years.

Read: The Scandal That Could Sink South Africa’s President

The rand enjoyed a bit of respite on Friday, paring some of its weekly decline after Finance Minister Enoch Godongwana said there was just a 10% chance of Ramaphosa leaving office. African National Congress officials are expected to continue discussing the matter over the weekend, with investors eager for any updates.

The nation’s currency, which is often seen as a proxy for risk appetite in emerging markets, has lost about 9% against the dollar so far this year. The rand closed Friday at 17.5052 per dollar, and the yield on 10-year sovereign local bonds was at 11.3%.

“It’s a very fluid situation, and anything can happen still,” said Brad Bechtel, a New York-based currency strategist at Jefferies. “Even if he does resign, it won’t change the broader backdrop in South Africa, which still has some challenge ahead of it.”

For Wells Fargo Securities strategist Brendan McKenna, the president’s resignation could leave a gap in leadership that would stoke political risk and drag the nation’s assets lower. But even a decision to stay could call the ANC’s strength into question and lead to longer-term market pain, he warned.

The scandal risks hurting the party’s credibility, as Ramaphosa was once touted as a figure of anti-corruption, helping the rand to leap 27% between November 2017 and February 2018. He’s since struggled to deliver on his reform agenda or ignite economic growth, with the country’s jobless rate among the world’s worst and major challenges stemming from the electricity sector.

Drought-Parched California Cities to Get Little Relief Next Year

Nigeria’s Geregu in Talks With Afreximbank Unit for Equity Stake