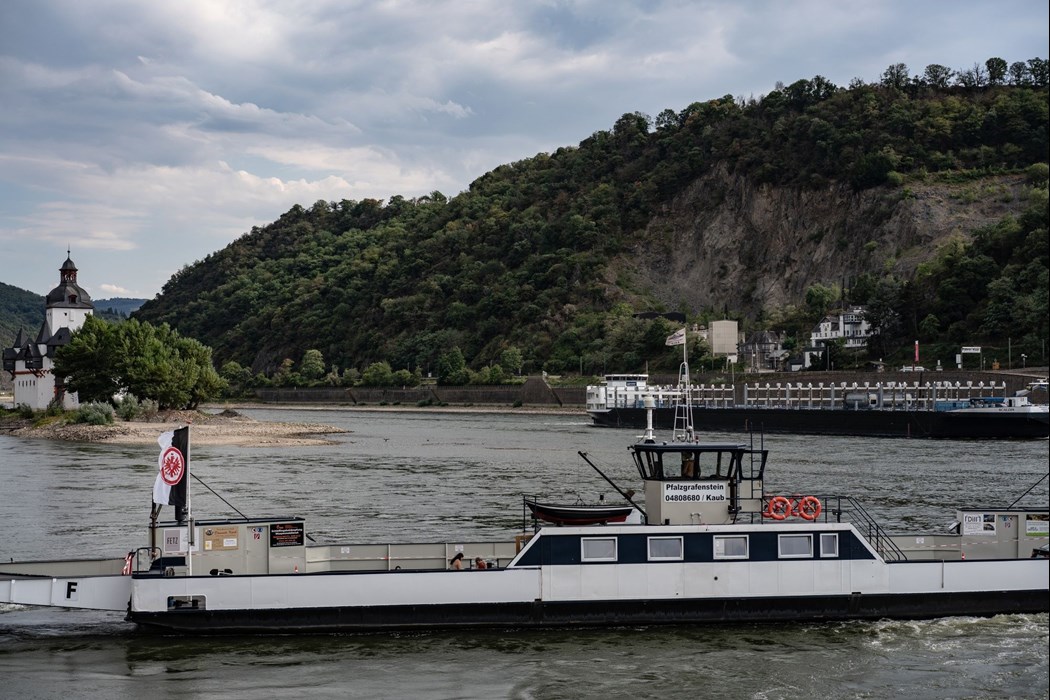 A chemical tanker passes a ferry boat on the River Rhine near Pfalzgrafenstein castle in Kaub, Germany, on Thursday, Aug. 4, 2022. An extended dry spell at the Rhine -- a key hard-coal import route -- risks choking Germany's energy supply further, stoking power-price volatility and elevating costs for coal-heavy generators, such as EnBW and Uniper.

(Bloomberg) -- The Rhine River is set to continue shriveling early into next week, further restricting the supply of vital commodities to parts of inland Europe as the continent battles with its worst energy crisis in decades.

A key water marker at Kaub -- where the river is narrow and shallow -- is poised to fall to 30 centimeters (11.8 inches) by Monday and drop further in subsequent days, according to German government data. At 40 centimeters, a level it reached Friday, it’s not economical for many barges to transit the chokepoint.

The Rhine is used to ship everything from fuels to chemicals, paper products to grains. The climate crisis couldn’t happen at a worse time, with Europe already in the grips of an energy supply crunch worsened by Russia’s war in Ukraine. As climate change dries up Europe’s rivers, it’s only worsening the cost-of-living crisis.

Container company Contargo GmbH & Co. KG said Friday that a drop at Kaub below 40 centimeters would prompt it to largely discontinue its barge business on the middle and upper Rhine. Some larger vessels are no longer able to pass that point, just west of Frankfurt, according to an official from the WSA, the German state waterways agency.

Companies have been taking steps to prepare. Chemicals maker BASF SE is using more rail to transport goods and has ordered shallow-water barges. Steelmaker Thyssenkrupp AG is using ships with lower drafts to keep its mill in the town of Duisburg supplied.

German utility EnBW Energie Baden-Wuerttemberg AG has enough coal to supply its power stations for the winter, even with disruption to shipments. Another power producer, Uniper SE, has warned that it may have to cut output at two key coal-fired power plants in Germany as it struggles to get fuel supplies along the river.

Truck company Hoyer GmbH hasn’t seen an increase in demand for its services due to the low water levels. Much of its business in the south of the country is on long-term contracts, a spokesman said.

Read: What German Companies Are Doing About the Drying Up Rhine

If the disruption continues into September, there could be an increase in demand for trucks to move goods across Germany, according to Simonas Bartkus, head of marketing and communication at Girteka Logistics, the owner of Europe’s largest fleet of the vehicles. The company isn’t seeing any immediate impact on demand stemming from the Rhine.

When the water marker at Kaub falls to 40 centimeters and below, it becomes uneconomical for many barges that haul commodities like diesel and coal to sail through that part of the river, a representative for Germany’s Federal Institute for Hydrology previously said. Low water levels restrict the volume of goods that can safely be carried.

The level at Kaub on Saturday stood at 36 centimeters, the lowest for the time of year since at least 1993, official figures show. By late Tuesday, that figure -- used to calculate draft -- is set to fall to 29 centimeters. The level isn’t the actual depth of the river.

The trade of 400,000 barrels a day of oil products could be disrupted along the river that stretches from the Amsterdam-Rotterdam-Antwerp region through Germany to Switzerland, according to Facts Global Energy.

Stockpiles of diesel and heating oil in independent storage in the ARA region are currently at their lowest seasonal level since at least 2008. A shallower river makes it harder to ship this important fuel into inland Europe. When the water levels sharply dropped in late 2018, these inventories jumped above the seasonal norm.

The river crisis is especially concerning for landlocked countries in central and eastern Europe that normally get fuel via the Rhine, according to the International Energy Agency. “We’re expecting this situation to continue towards the end of the year,” Toril Bosoni, head of the IEA’s oil market division, said in a Bloomberg Television interview on Thursday.

(Updates with forecast in second paragraph, current level in 10th.)

Jeep Maker May Invest Billions to Make EVs in Mexico