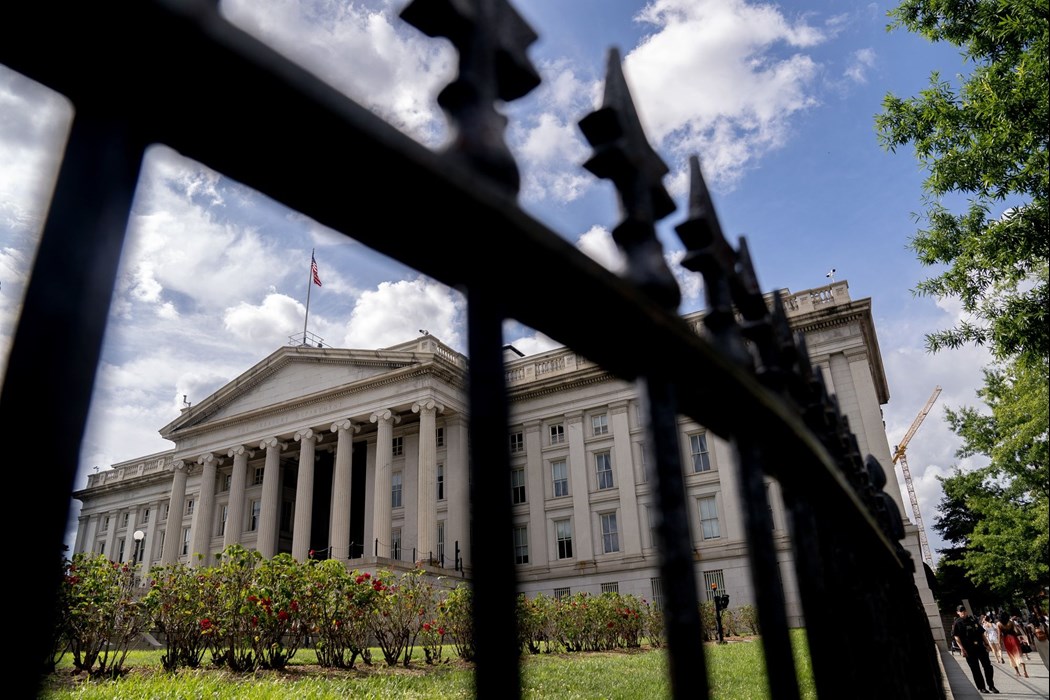 The U.S. Treasury Department building in Washington, D.C., U.S., on Saturday, June 26, 2021. The Federal Reserve might consider an interest-rate hike from near zero as soon as late 2022 as the labor market reaches full employment and inflation is at the central bank's goal.

(Bloomberg) -- The Biden administration is privately warning about Republican efforts to cut the Internal Revenue Service’s budget, arguing the effort could harm the agency’s efforts to disseminate the historic $270 billion in clean-energy tax credits Democrats passed last year as part of the Inflation Reduction Act.

Treasury Department officials, in a zoom meeting Thursday with environmental and clean energy groups, alluded that legislation, which would rescind nearly $80 billion from the IRS and was the first bill passed by the House’s new Republican majority, could hamstring the agency’s abilities to administer the record funding for tax credits, according to two people familiar with the matter.

The Treasury Department will be charged with administering the tax credits, which range the gamut from extensions of lucrative credits used by the solar and wind industry to incentives for nuclear power and hydrogen to expansions of credits for electric vehicles and carbon capture.

But the agency will need to hire new staff to get the credits out the door, including writing and issuing a bevy of guidance and regulations. The credits have an estimated value of several times the annual budget of the Energy Department.

Officials on the call, which included Seth Hanlon, treasury’s deputy assistant secretary for tax and climate policy, warned that timely implementation of the tax credits depends on the agency being fully staffed and fully modernized, one of the people said. Officials on the call also noted the IRS is operating without a confirmed commissioner following the departure of Charles Rettig, a Donald Trump appointee, whose term expired Nov. 12.

“A modern IRS is critical to realizing the full economic, cost-saving, and climate benefits of the Inflation Reduction Act,” the Treasury Department said in a statement. “New resources will ensure IRS can help taxpayers access credits, saving them potentially thousands of dollars at tax time and hundreds of dollars on their energy bills.”

The Treasury Department, in an email obtained by Bloomberg, invited groups to discuss “the impact that IRS modernization will have in the execution of the IRA, and how that effort is critical to the success of our climate efforts.”

“IRS Modernization and Climate were not just part of the same bill, they are connected and we would like to discuss how and why,” the agency said in the email.

The effort to cut IRS funding, a top priority for House Speaker Kevin McCarthy and other House Republicans, is likely to become a bargaining chip at the center of upcoming debates over raising the debt ceiling and funding the federal government.

The $80 billion allocated to the IRS in Democrats’ $374 billion Inflation Reduction Act was meant for a range of uses that included operations, upgrading computer systems and enforcement. It also included $4.8 billion for modernization, an effort launched in 2019 that includes an upgrade of business systems, according to a Congressional Research Service report.

Republicans voted last week along party lines to repeal $71.5 billion of the funding, arguing the IRS planned to use it to hire an “army” of 87,000 tax auditors. That figure has been widely debunked.