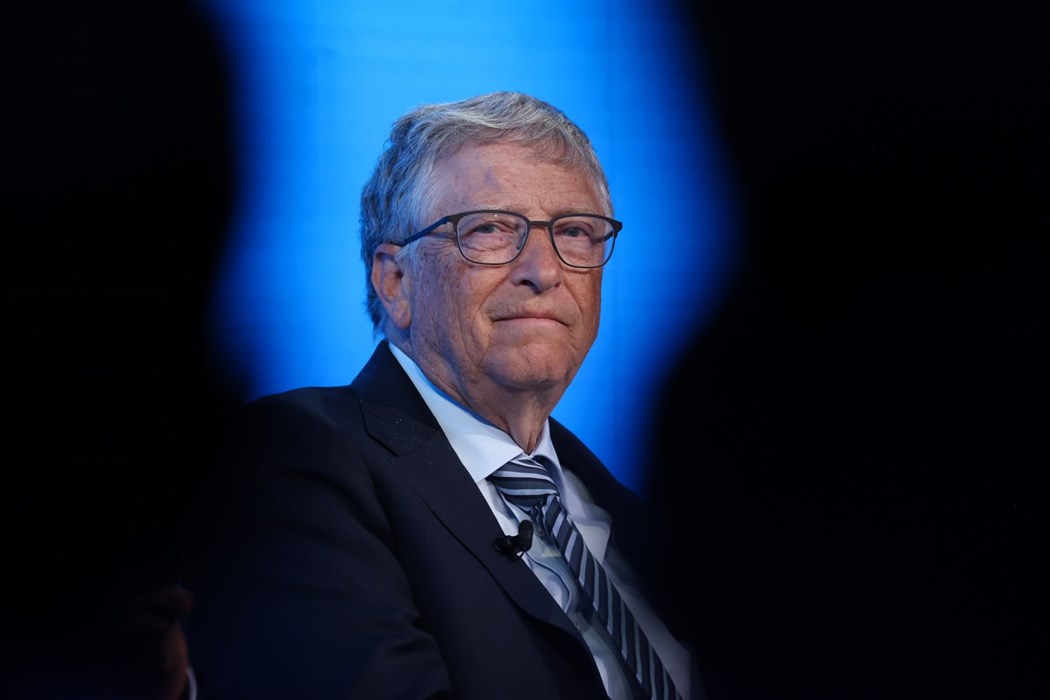 Bill Gates, co-chairman of the Bill and Melinda Gates Foundation, during a panel session on day two of the World Economic Forum (WEF) in Davos, Switzerland, on Tuesday, May 24, 2022. The annual Davos gathering of political leaders, top executives and celebrities runs from May 22 to 26.

(Bloomberg) -- Climate change is the focus of dozens of events in New York City this week, as world leaders, corporate executives, activists and artists all converge for both the United Nations General Assembly and Climate Week.

That includes the Race to Zero and Resilience Forum Wednesday, organized by the UN Climate Action High-level Champions and Michael Bloomberg, majority owner of Bloomberg LP, the parent of Bloomberg News. The event will connect government leaders and environmental activists, with the goal of delivering capital globally to groups working to reduce emissions without exacerbating debt in vulnerable communities. Speakers including California Governor Gavin Newsom and renowned naturalist Jane Goodall will evaluate significant achievements that have been made and outline the key next steps that will be required.

More information about the event can be found online and on the Bloomberg Terminal.

Rich nations must work to overcome lingering distrust over their failure to fulfill climate finance pledges, according to Sameh Shoukry, president-designate of COP27, underscoring a source of tension that threatens to undermine upcoming negotiations in Egypt.

“There is a deficiency in trust, and we must regain that confidence,” Shoukry, Egypt’s foreign affairs minister, said at the forum.

Wealthy nations have yet to satisfy their promise of providing $100 billion in annual funding to help poor countries address climate change — a shortfall that still needs to be filled. A plan for after 2025 also is still being developed.

Although the upcoming COP27 climate summit is meant to focus on implementation, Shoukry’s comments emphasize the extent to which other concerns may intrude. Climate-vulnerable countries are pushing for the establishment of a loss and damage program that can help nations deal with devastating floods, droughts and other consequences of the warming planet.

On loss and damage, “it’s still a question whether it’s going to be sufficiently addressed,” Shoukry said.

Simon Stiell, executive secretary of the UN Framework Convention on Climate Change, stressed the importance of corporate action to buttress national emissions-cutting commitments, even as he urged nations to boost their ambitions.

His comments come about six weeks before the next UN climate summit in Egypt, and days before countries are due to submit any new or revised emissions-cutting pledges under the Paris Agreement.

Initiatives around transparency and accountability are also critical, he said. “The commitments made must be commitments delivered.”

Nordic Real Estate Partners A/S is partnering with a group of about 100 mayors around the world to promote making cities less dependent on cars as part of the fight against climate change.

The collaboration announced Wednesday between the Copenhagen-based firm and the group, C40 Cities, will promote the so-called “15-minute cities” concept -- the idea that cities should be designed to have everything residents need within a 15-minute walk, bike ride or public transit ride. The effort will begin with pilot programs in several cities, which have not yet been announced.

Claus Mathisen, NREP’s chief executive officer, did not disclose how much money the firm is committing to the initiative but said it made a “significant financial contribution.” Nordic Real Estate Partners has 18 billion euros ($17.8 billion)in assets under management, he said.

“Dense, multi-purpose neighborhoods see a reduction in emissions,” Mark Watts, the executive director of C40, said during a press conference. The concept helps to reduce carbon emissions and “reclaims space in cities from polluting vehicles back to people,” he added.

Bloomberg Philanthropies announced an $85 million program to slow the expansion of the petrochemical industry, building on past initiatives that pushed to close coal plants and reduce greenhouse gas emissions.

The effort announced Wednesday will target 120 new or proposed oil, gas and petrochemical plants across at least five states, from the US Gulf Coast to the growing gas hub of the Ohio River Valley.

“The world is transitioning to renewable energy,” but oil and gas companies are turning to plastics and petrochemicals as a lifeline, Abigail Dillen, president of Earthjustice, said. “We can’t afford a new investment in fossil fuels.”

Funding could help arm front-line communities already battling plastics and chemical plants, including in Louisiana’s infamous “Cancer Alley.” Those activists are like David fighting Goliath, Rev. Lennox Yearwood Jr., chair of the Beyond Petrochemicals Campaign, said. “It’s time to give David some new stones for his slingshot.”

Hydrogen has the potential to significantly reduce emissions from industrial processes, if it can be produced at a low-enough cost, according to billionaire Bill Gates.

Industrial processes for products like steel and cement are significant sources of emissions. While there are new ways to produce them, high costs remains a barrier. Technologies to produce hydrogen can help address these challenges, Gates said during the event.

“If you get the hydrogen cheap enough, you get the super-magic thing, which is that the green product doesn’t cost more,” Gates said.

Her comments reflect the growing awareness that limiting global warming is a monumental challenge that will require significant backing from governments and businesses.

While New Zealand has historically contributed a small portion of the air pollution that’s driving climate change, Ardern has won praise for her aggressive stance on curbing emissions, making her a leading voice in the environmental debate.

“We cannot expect environmental innovation to happen in a vacuum,” Ardern said. “As governments, we have a responsibility to create the incentives and the space for you to flourish.”

By Will Wade, Erin X. Wong , Jennifer A. Dlouhy