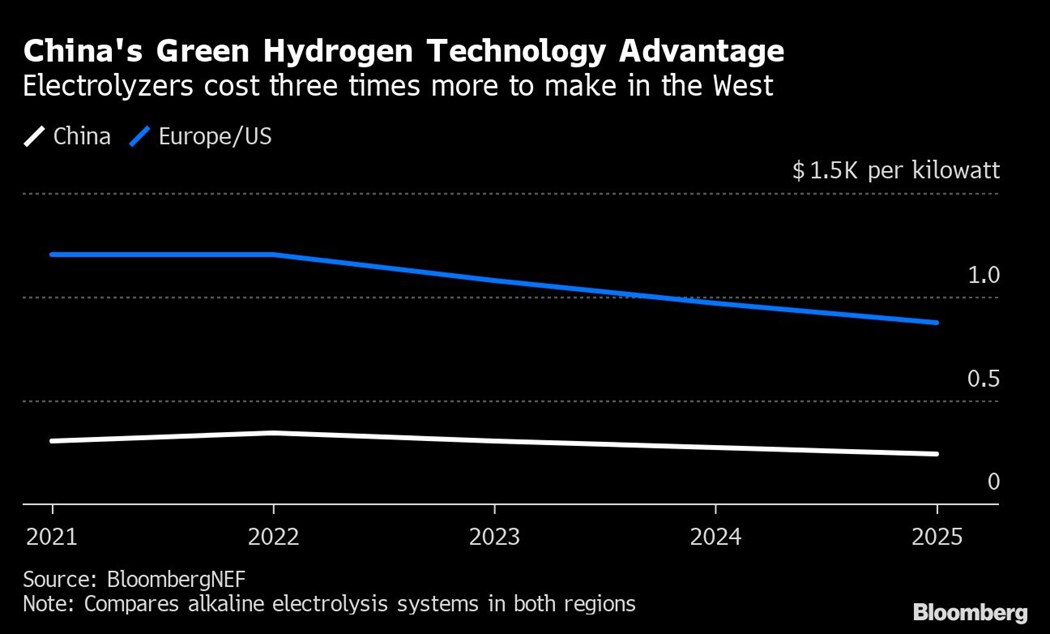 (Bloomberg) -- Chinese factories can produce electrolyzers at a fraction of the cost of US and European competitors, giving them an edge in the race to manufacture the key technology for unlocking green hydrogen.

A Chinese alkaline electrolysis system costs about $343 per kilowatt, compared with $1,200 per kilowatt in the West, BloombergNEF said in a report. Electrolyzers run an electric current through water, separating it into oxygen and hydrogen. When powered by renewable energy, they can produce hydrogen gas to fuel everything from cars to steel mills without any carbon emissions.

Orders for the systems are soaring as more industries seek to decarbonize, which should help manufacturers build up economies of scale and reduce costs by 30% by 2025, BNEF analysts including Xiaoting Wang said in the report.

Chinese factories enjoy cheaper labor and a more developed supply chain for the components and raw materials, according to BNEF. China also had a relatively larger electrolyzer manufacturing industry before the green hydrogen boom, because of industrial demand in sectors like polysilicon manufacturing, it said.

Why Hydrogen Is the Hottest Thing in Green Energy: QuickTake

Even given added costs for transportation and installation, Chinese systems can be delivered to international markets at a significant discount to Western manufacturers. BNEF expects China’s share of European and US sales to be less than 30% through 2025, but says there’s a chance to increase it beyond then.

Any move to erect trade barriers would likely be met by Chinese firms expanding manufacturing into Southeast Asia, following the blueprint of the solar industry, BNEF said.

“Chinese manufacturers have started their march into international markets,” it said in the report. “Electrolysis products made in China are likely to become popular worldwide during 2025-30.”