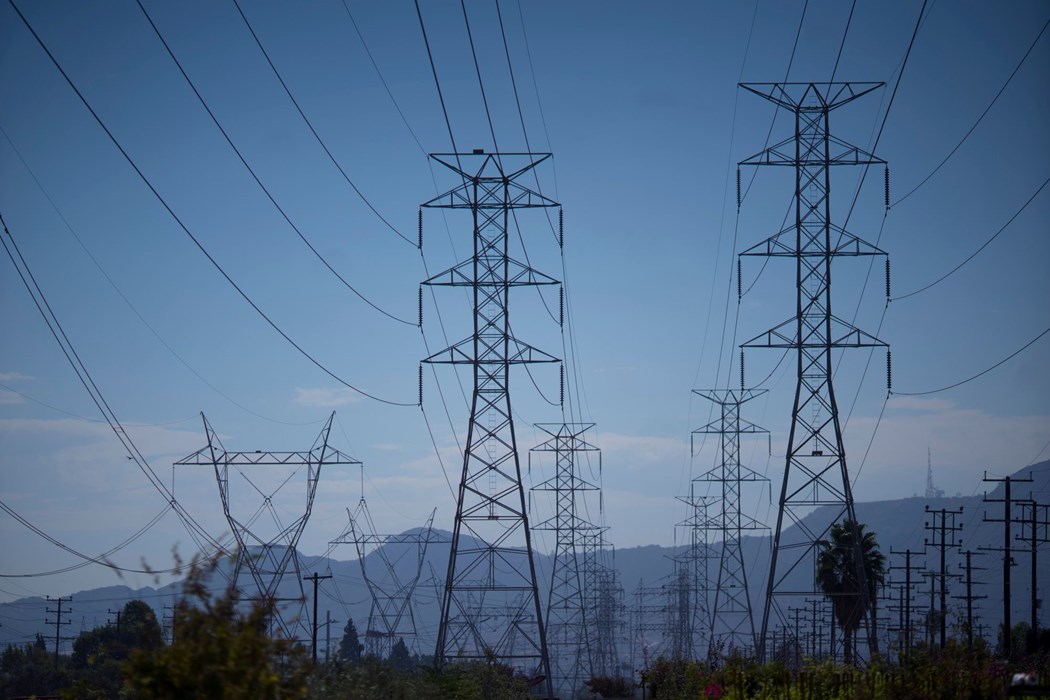 Power lines during a heatwave in North Hollywood, California, US, on Thursday, Sept. 1, 2022. After narrowing avoiding blackouts, California faces another bruising test of its power grid Thursday as a heat wave smothering the region builds, driving temperatures to dangerous levels.

(Bloomberg) -- Months after the Biden Administration passed sweeping climate legislation, the battle to determine how quickly the US transitions away from fossil fuels hinges in part on local and state-level ballots.

In some races, voters are choosing between gubernatorial candidates with opposing ideas on climate change, while others will pick state regulators who will decide whether to adopt more renewable energy sources. The implications will stretch beyond the US.

The world is still falling short of plans to reduce climate-changing emissions and contain rising temperatures despite some encouraging signs, according to a United Nations report. Washington approved billions of dollars worth of investments and credits to spark a cleaner economy, but the US will need a big boost from state and local policies in order to halve its emissions by 2030.

Here are six key state-level elections to watch on Tuesday that will impact the course of climate change.

The five-member Arizona Corporation Commission, which regulates the state’s utilities, has two seats up for grabs. Republican contenders Nicholas Myers and Kevin Thompson are against setting renewable standards for utilities, arguing that renewable power is expensive. Democratic candidates Sandra Kennedy and Lauren Kuby are in favor of standards and want to transition to 100% renewable energy as soon as possible. Democrats would have to win both seats to flip the current Republican majority.

A ballot proposal could determine the pace of electric vehicle adoption in the nation’s most populous state. Proposition 30 would impose a wealth tax on the state’s high-income earners to fund rebates for the purchase of electric vehicles, build more EV charging stations and boost wildfire-prevention programs. Environmental activist groups and Lyft Inc. support the proposal while Governor Gavin Newsom and some notably wealthy Californians, like Netflix Inc CEO Reed Hastings, say it’s “fiscally irresponsible.” The tax is expected to raise $5 billion annually.

The winner of the governor race will shape the makeup of the state’s utility regulator. The New Mexico Public Regulation Commission is moving from a five-person elected committee to a three-person group appointed by the governor. Incumbent Michelle Lujan Grisham, a Democrat, has signed legislation to support a transition away from coal-fired power and set new renewable energy requirements. Republican challenger Mark Ronchetti wants to remove regulations that curb oil and gas development and says he supports all forms of energy including fossil fuels, solar, wind and nuclear power.

A close three-person governor’s race could result in a Republican holding office for the first time in decades and lead to a reversal in Oregon’s progressive climate policies. Republican candidate Christine Drazan said she will “tear up” a cap-and-trade executive order designed to reduce greenhouse-gas emissions, arguing it will drive up already record high gasoline prices. Democratic candidate Tina Kotek supports keeping Oregon’s climate goals that include cutting carbon by 45% below 1990 levels by 2035 and by 80% by 2050.

The race for governor will determine the direction of energy policy in one of the biggest fossil-fuel producing states in the country. Republican candidate Doug Mastriano wants to pull Pennsylvania out of a carbon market called the Regional Greenhouse Gas Initiative (RGGI) and supports lifting regulations on hydraulic fracturing, or fracking, and coal mining to boost production. Democratic candidate Josh Shapiro hasn’t taken an official stance on RGGI; he’s in favor of setting a 30% renewable energy standard by 2030 and targeting net-zero emissions by 2050.

Leadership of the Texas Railroad Commission, the powerful regulatory agency that issues drilling permits, inspects wells and enforces anti-pollution laws in the Lone Start state, is up for grabs this year. Democrat Luke Warford is running in a close race against Republican incumbent Wayne Christian, who has close ties to the oil industry he oversees and has admitted his skepticism toward climate change and renewable energy. Warford has vowed to challenge the agency’s approach to flaring, the practice of burning off excess natural gas that flows out of oil wells.

UAE delegation to COP27 in Egypt has strong and diverse representation