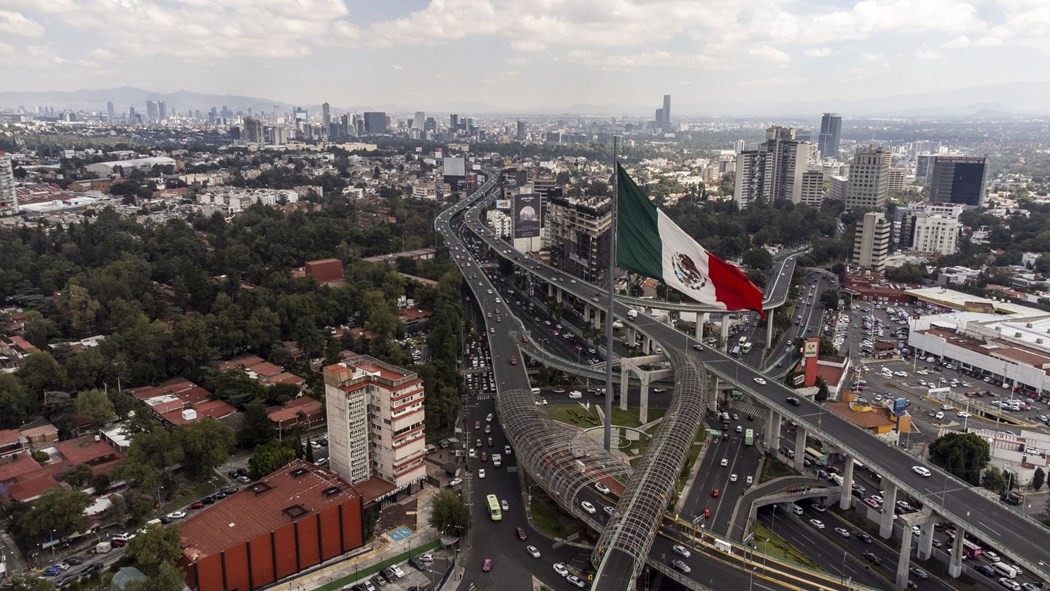 The monumental Mexican flag of San Jeronimo Lidice in the south of Mexico City, Mexico, on Thursday, Sept. 22, 2022. Mexico's inflation came in above expectations in early September, giving the central bank minimal room to reduce the pace of interest rate hikes at its meeting on September 29.

(Bloomberg) -- One of the highlights of the highly anticipated UN climate change convention last week was the ambitious emissions targets announced by Mexico, delivered proudly by the nation’s foreign secretary Marcelo Ebrard alongside US special presidential envoy John Kerry.

There’s just one problem. Energy experts don’t see Mexico’s pledge to reduce carbon emissions by 35% in 2030 as indicative of a policy shift, but rather political maneuvering in a protracted trade dispute with its northern neighbor.

Under the leadership of President Andres Manuel Lopez Obrador, known as AMLO, Mexico has increasingly shifted toward a more fossil fuels-heavy energy policy steered by the country’s state-owned energy companies at the expense of private sector-led renewables projects. Mexico’s nationalist policies have sparked a potentially litigious conflict with the US over alleged breaches of its commitments under the regional free trade agreement USMCA -- and the nation’s climate pledges are seen as buying Mexico time amid heated bilateral talks, with little possibility of being carried out under the current administration.

Mexico’s goal announced at the COP27 convention is “completely counter to the policy and rhetoric that has come out of Mexico, and its not hard to conclude that they are experiencing bilateral pressure,” said John Padilla, managing director of IPD Latin America. “The view of a lot of people that are following this thing closely is that these are stall tactics. The history here is not in favor of the actions that are being put on the table.”

US and Mexico negotiations under USMCA were extended last month following a failure to reach an agreement over Mexico’s energy legislation, which is seen by the US as harming foreign companies in the electricity sector.

AMLO modified the law to enable the Comision Federal de Electricidad, or CFE, to have priority for its aging hydroelectric and thermal plants in the energy grid, while privately owned wind and solar projects come later in the dispatch order. The regulator has also prevented foreign companies from advancing clean energy projects by not granting them permits to operate.

Should the US request a panel as part of the USMCA trade dispute settlement procedure, it could pave the way for Mexico’s trade partners to pursue retaliatory measures such as tariffs on Mexican exports.

“The biggest mover right now is actually AMLO trying to postpone US action under USMCA over the energy legislation,” said Duncan Wood, the Wilson Center’s vice president of Strategy & New Initiatives. “What he’s doing is he’s playing for time in the negotiation over the consultation and hence the panel. He’s trying to put that off for as long as possible.”

AMLO representatives did not respond to a request for comment. A spokesperson for the Mexican foreign ministry declined to comment.

Among the measures announced, Mexico plans to deploy more than 30 gigawatts of new wind, solar, geothermal, and hydroelectricity capacity by 2030, and it has a preliminary investment plan of $48 billion. It’s new emissions reduction target is up from a previous goal of 22% by 2030.

The crux of AMLO’s plan envisions transforming the northwestern Mexican state of Sonora into a renewable energy hub, replete with solar and wind plants, lithium mining and electric vehicle factories. Lopez Obrador has asked the US to help finance the so-called Sonora Plan, which he’s said President Joe Biden might sign in a visit to Mexico in December or January.

However, AMLO has indicated the CFE would be the majority owner of any project in Sonora, which could make the plan difficult to implement due to the state utility’s lack of resources, noted Wood. “If the government decides to do all of this through the CFE then there’s just no way that they’re going to make it,” he said. “And it’s also a sign that they’re really not taking it very seriously.”