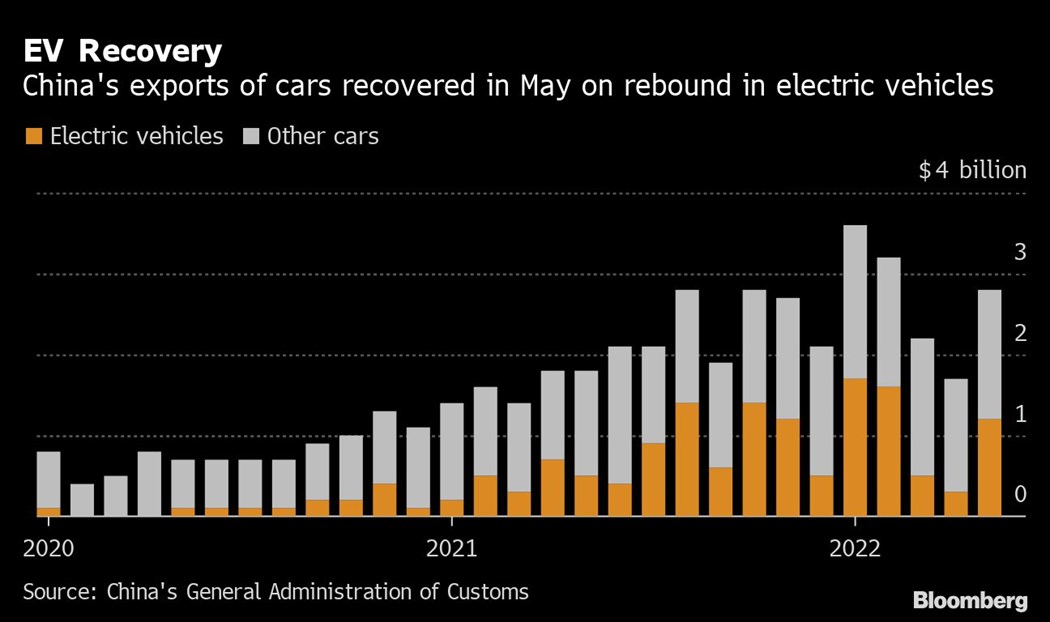 China’s shipments of cars rebounded in May, with electric vehicle exports more than doubling, as Covid lockdowns gradually ended.

(Bloomberg) -- China’s shipments of cars rebounded in May, with electric vehicle exports more than doubling, as Covid lockdowns gradually ended.

Car manufacturers in China shipped $1.2 billion worth of electric passenger vehicles, up 122% from a year earlier and almost triple the level in April, when car factories in Changchun and Shanghai such as those run by Telsa Inc were shuttered or barely open. Passenger cars worth $2.8 billion were exported, the fourth-highest monthly total in the past few years.

With domestic sales falling for 11 of the past 12 months, car companies in China have boosted their sales overseas, with exports in just the first five months of this year exceeding the whole of 2020. The biggest market is Europe, which took nearly half of shipments in May and about three-quarters of electric car exports, with much of the rest going to Asia.

China’s current excess EV production capacity and low domestic sales mean it will continue to be a significant exporter in the medium term, according to Stephen Dyer, managing director at Shanghai-based consultancy AlixPartners. China made up almost 60% of global exports of electric vehicles in 2021 and the trend continues in 2022, although Tesla’s new factory in Europe may slow exports from China, he said.

Tesla shipped more than 22,000 cars overseas last month, after exporting only 60 in March and none in April, when it halted assembly due to the lockdown in Shanghai.

“The production resumption in Shanghai has made a great contribution to car exports,” Cui Dongshu, secretary general of China’s Passenger Car Association, said in a briefing earlier this month. Electric vehicle exports were 21% of total shipments, he said, underpinned by the recovery of major automakers including Tesla and SAIC Corp., which are both based in Shanghai.