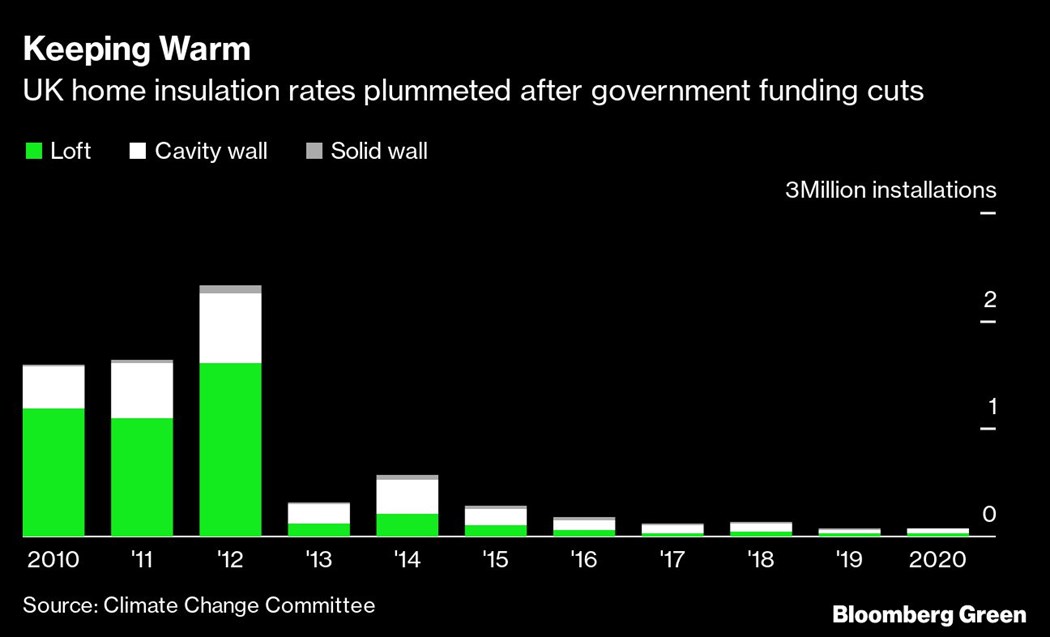 (Bloomberg) -- The UK government won’t be able to insulate as many homes as planned before winter after it scaled back a £1 billion ($1.2 billion) boost to its flagship scheme to help some of the country’s poorest households curb their energy use.

A plan was dropped to double the £1 billion of funding in the so-called Energy Company Obligation after Boris Johnson’s resignation as prime minister, according to people familiar with the matter who asked not to be named because the matter is private. There is a further £30 million from existing funds that hasn’t been spent and will be lost, according to another person.

The UK is in danger of falling behind with efforts to improve the energy efficiency of its leaky homes. New policy has been further hindered by the caretaker government which said it won’t be making any major changes while a new leader is elected. Better insulation is central to cutting demand and tackling climate change by reducing dependence on fossil fuels. The lack of progress comes even as yearly bills are set to rise to an unprecedented £3,420 in October, pushing millions of households into fuel poverty.

The government has been criticized for failing to help homeowners save energy in the middle of a crisis that’s been made all the more acute by Russia’s invasion of Ukraine.

The fourth tranche of £1 billion ECO was supposed to be doubled to help households ahead of winter. The scheme is going ahead without the extra planned funding, according to a government spokesperson.

“Thanks to government support, the number of homes with an energy efficiency rating of C or above is at 46% and rising, up from just 13% in 2010,” the spokesperson said.

There is also about £30 million ($36.1 million) left over from the government funds to help local authorities improve energy efficiency in the last financial year, according to a person familiar with the matter. That’s about 10% of the budget of the two programs.

But the UK’s departure of the European Union and supply chain snarls meant the government wasn’t able to fully spend funds from its Social Housing Decarbonisation Fund and Home Upgrade Grant, the people said, asking not to be identified because the information is private.

Likewise, the pandemic and Russia’s war in Ukraine caused major shortages of materials, long lead in times on products and costs rising faster than inflation, one person said. That’s led to unfulfilled contracts or less ambitious projects than first envisaged.

Officials in the Department for Business, Energy and Industrial Strategy and the Treasury had been in discussions to redirect the leftover cash, but those talks collapsed due to the Tory leadership contest, the people said. A decision now can’t be taken before the new leader comes to power in September.

Over the past decade, a range of energy-efficiency measures such as home insulation have been botched or abandoned under successive prime ministers, according to the Climate Change Committee. Insulation rates remain well below the peak rates of delivery achieved before 2012, when key policies were scrapped, the statutory body said in 2019.