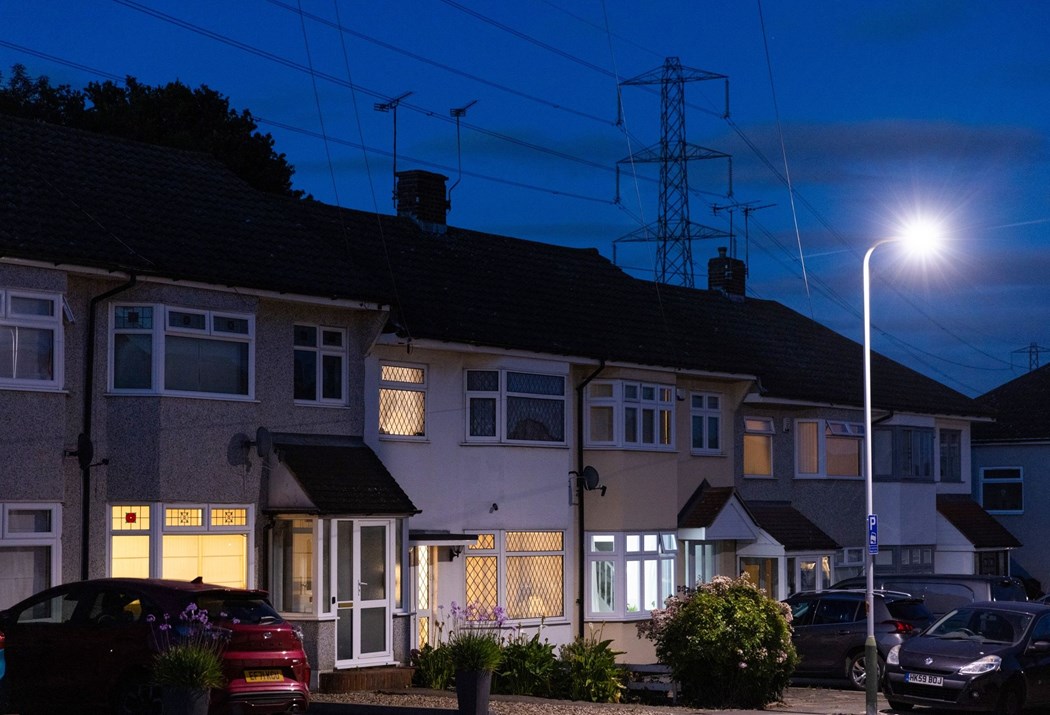 An electricity transmission tower near residential houses with lights on in Upminster, UK, on Monday, July 4, 2022. The UK is set to water down one of its key climate change policies as it battles soaring energy prices that have contributed to a cost-of-living crisis for millions of consumers. Photographer: Chris Ratcliffe/Bloomberg

(Bloomberg) -- The Labour Party will demand the UK government drops plans to remove a cap on energy prices, putting pressure on Liz Truss and Rishi Sunak -- vying to take over as prime minister -- to come up with proposals to mitigate what threatens to be the nation’s biggest cost-of-living crisis in decades.

According to the Guardian newspaper, party leader Keir Starmer on Monday will ask that the government tell regulator Ofgem to freeze the current £1,971 ($2,390) limit on household energy bills. Cornwall Insight has predicted that the typical annual bill will jump in October to more than £3,500, and to beyond £4,200 in the first quarter, a crushing blow for many households.

Warnings that millions of low-income Britons face misery as power prices spike are dominating the national conversation. And with inflation rampant, interest rates rising and strikes bringing train service to a halt, Britain is already beset by what’s been dubbed a summer of discontent.

The weeks-long leadership battle between Truss and Sunak to replace Boris Johnson has exposed paralysis at the heart of government, even as the economy sputters toward what’s been predicted to be a recession lasting more than a year. Johnson is staying on until his successor is named in early September, but his administration won’t make any major fiscal decisions in the mean time.

The Telegraph reported that Truss, whose campaign has focused largely on her desire to cut taxes to revive the economy, might limit access to the discount currently available to all Britons facing steeper energy bills.

Simon Clarke, one of Truss’s backers and the chief secretary to the Treasury, mused to the paper it was “odd” that wealthy people are set to benefit from a £400 handout in October -- part of a package unveiled by Sunak when he was Chancellor of the Exchequer.

The Times reported late Saturday that the Treasury is planning a lending program for suppliers that would reduce household bills by another £400 this winter. Scottish Power Ltd. and E.ON SE, two of the country’s biggest energy suppliers, are proposing government-backed loans to keep prices capped, the Sunday Times reported.

In an interview with the Sun published on Sunday, Sunak set out a plan that included giving unspecified support to pensioners and the poorest families for their energy bills.

For the longer term, he wants to encourage more production from the North Sea and fracking, and to reform regulations governing wind, solar and nuclear power.

“We’ll get through this winter with my plan but it’s also the longer-term things we need to get right,” he told the newspaper.